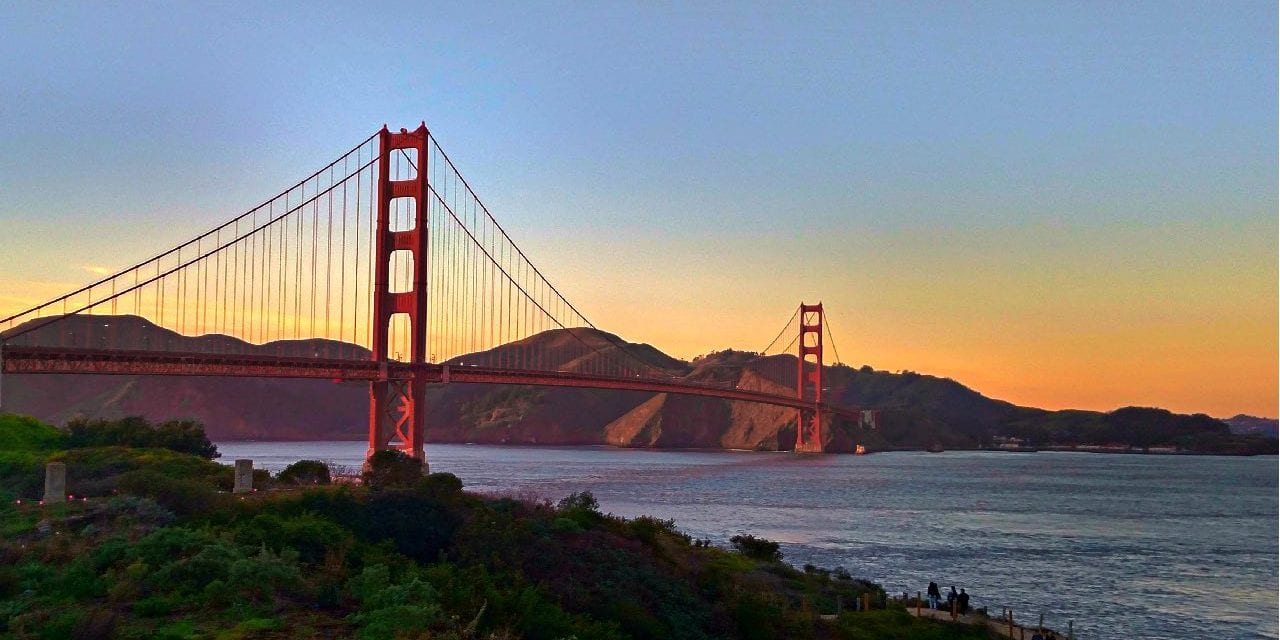 Tennessee Williams once said “America has only three great cities: New York, San Francisco, and New Orleans. Everywhere else is Cleveland.” We’ve designed these San Francisco walking tours around self-guided routes that are easy to follow and will take you to all of the famous sites in one very full and photogenic day. We also provide enough details that you can spread your San Francisco walks out into a long, romantic weekend you’ll always remember. What’s more, these tours are 100% designed around public transportation. You can take the BART from SFO, start walking, and BART back for your flight out (if you really wanted to). Is there a better way to see America’s greatest city (at least one of the top 3 ;-))? 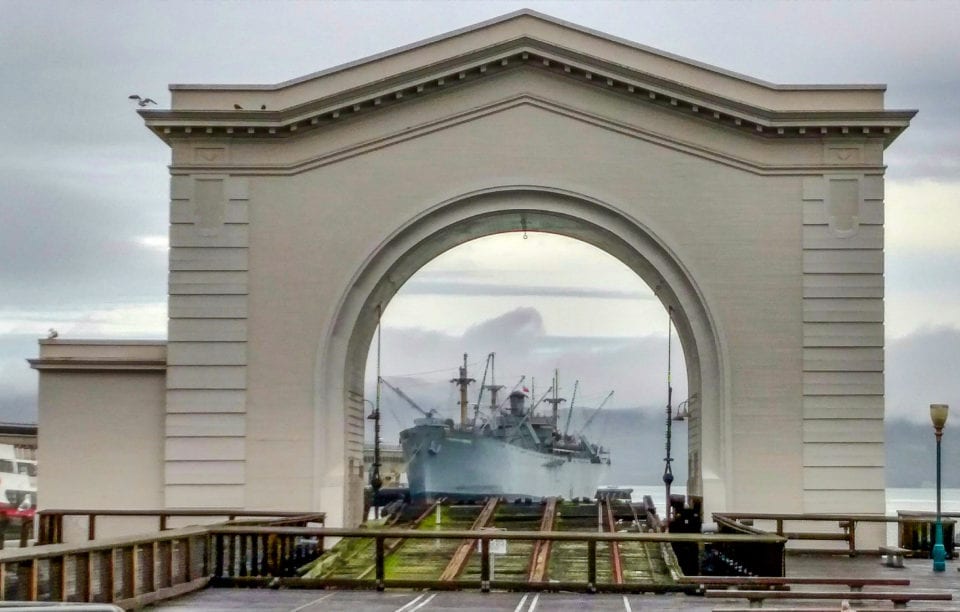 In a recent poll, 68% of the people ranked San Francisco the hilliest city in America. The finalists were San Francisco, Seattle, Pittsburgh, and Fitchburg. I’m not exactly sure where Fitchburg is, but my guess is somewhere near Cleveland. Let’s just say there’s a reason San Francisco has cable cars. I could not plan the ultimate San Francisco walking tours without knowing the lay of the land. Oh, I suppose I could try, but that route would have its ups and downs.

For the price of your time (and tolerance of my sense of humor), I’m offering something much better than that. I created what I think is the best walking route through San Fran. You’ll do all the sightseeing including:

All these tours together make a massive 18-mile loop that Google estimates will take 6 1/2 hours to complete. If you add in a little lens time, stops for the best food and drinks in San Francisco, and you’ll have a weekend full of activities.

READ
Ode to Egypt - Is It Still a Must See Destination? 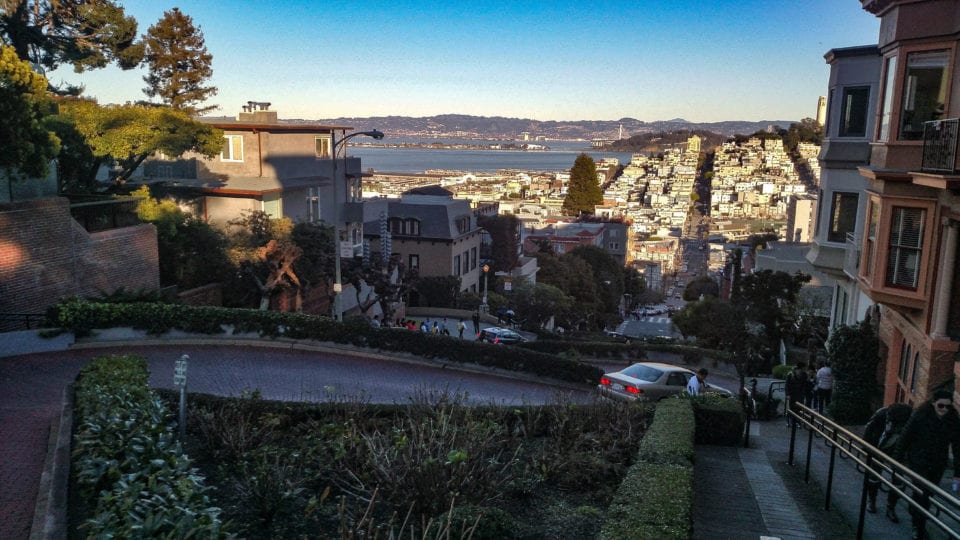 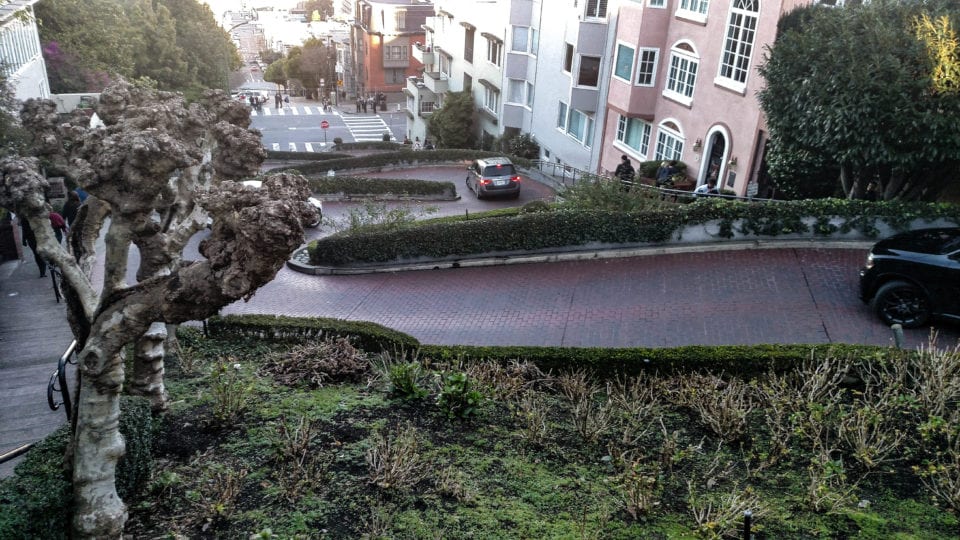 Below is our map to these self-guided walking tours. If it doesn’t load in your browser just hit the refresh button 🙂 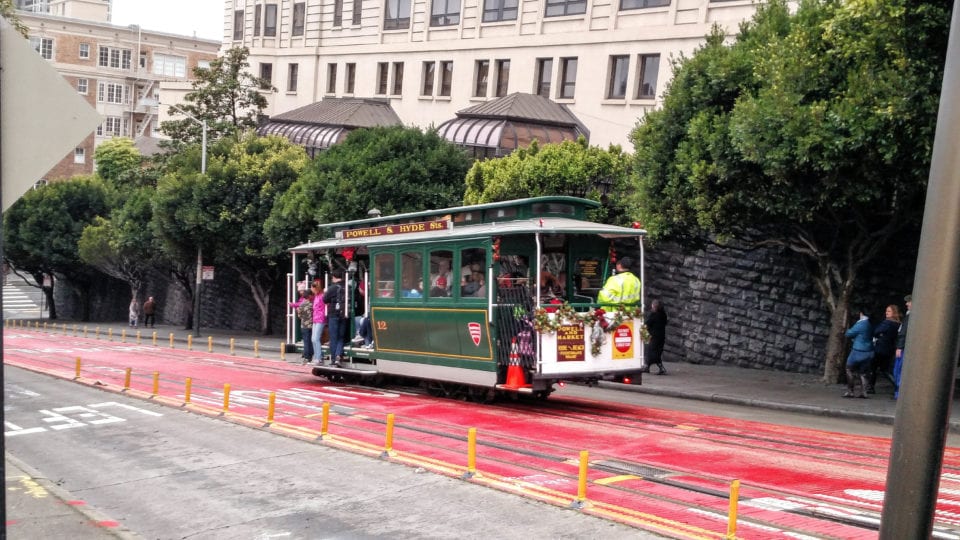 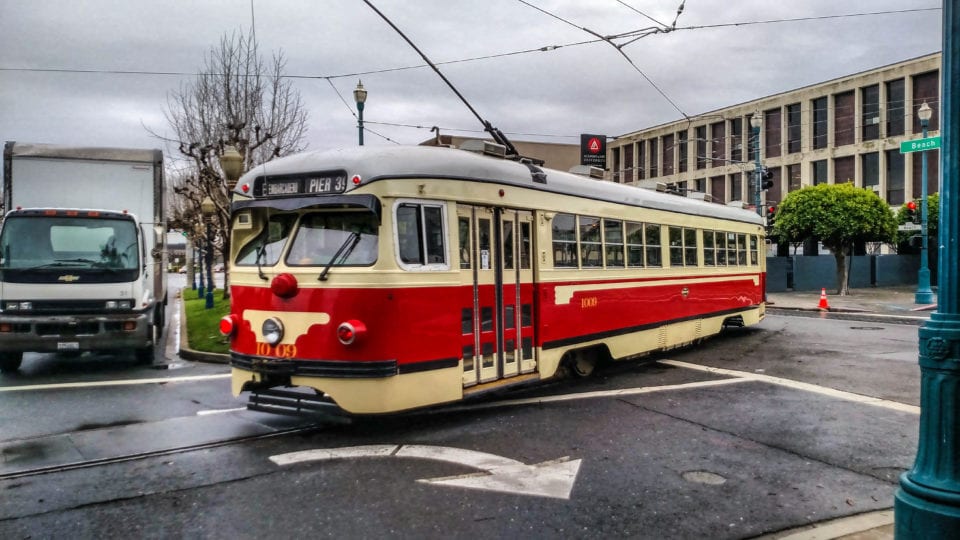 There are four primary walking tours in the city. The time is a Google estimate, but with hills and sightseeing, it will probably take you longer than that. The mileage estimates are only accurate to one significant figure, so the timing helps you estimate the missing precision.

These routes are fully detailed below. 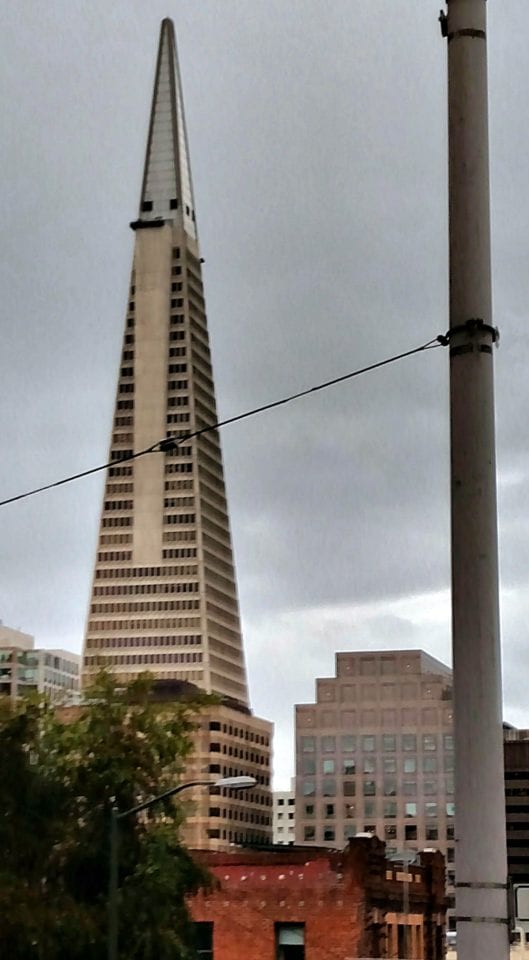 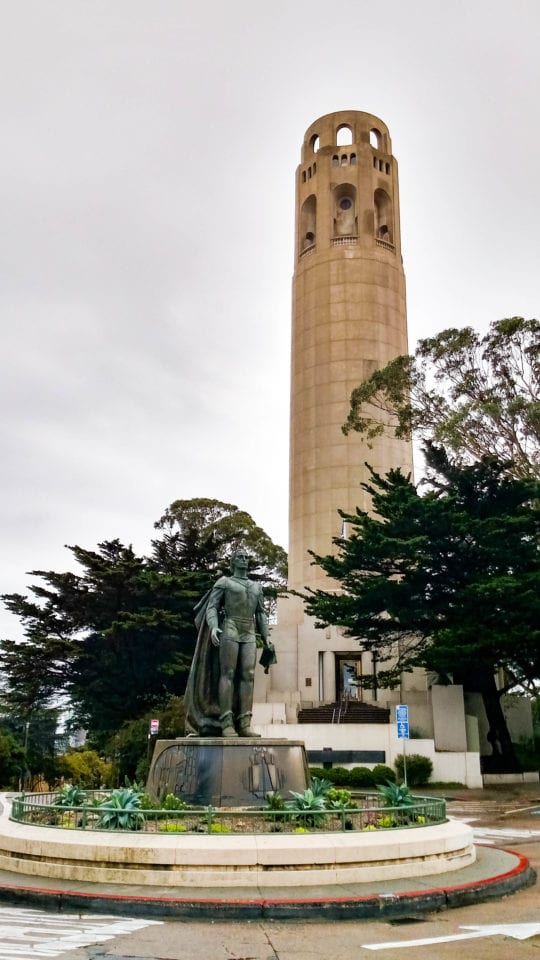 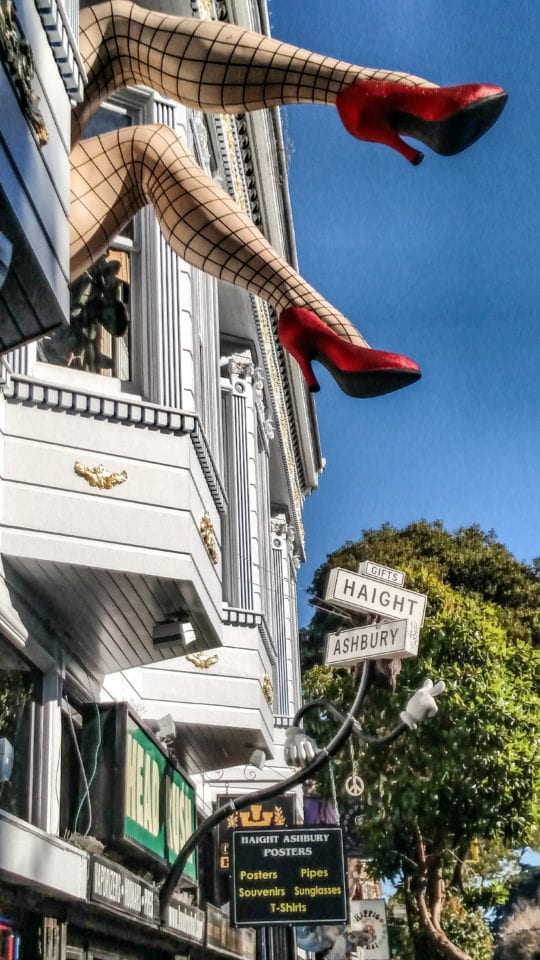 This San Francisco walk starts at the Powell Street Station, more or less at the top of Knob Hill. Time permitting, you would consider crossing Market Street to see the museums and check out Folsom Street. Instead, you pop over to take some iconic shots of cable cars climbing the hill at the Cable Car Museum and Union Square. You travel down through San Francisco’s Chinatown (the largest one outside of Asia) catching views of the Transamerica Pyramid. You reach Little Italy and celebrate the Beat Generation. A short climb up Telegraph Hill takes you to Coit Tower and expansive views of San Francisco Bay.

From Coit Tower, take the Greenwich Steps to the piers. The shops along Pier 39 and Fisherman’s Wharf cater to the multitude of tourists. This photo-dense area features highlights like the sea lion colony at the end of Pier 39 and the Powell/Mason cable car turnaround. Unique attractions include the Musée Mécanique and the SS Jeremiah O’Brien. Mainstream draws are Aquarium of the Bay, Madame Tussauds, and Ripley’s Believe it or Not. The cable car makes an excellent short cut back to the top of the hill and Powell Street Station.

This walking tour takes you from Fisherman’s Wharf to the Presidio along the waterfront of the San Francisco Bay. Here you’ll find sweeping views of San Francisco Bay, Alcatraz Island, and of course, the Golden Gate Bridge. You’ll pass several iconic San Francisco highlights as you leave Fisherman’s Wharf like The Original Ghirardelli Ice Cream & Chocolate Shop. If you wanted to take a detour up Leavenworth Street, you could see Lombard Street aka The Crooked Street. Continuing along the waterfront you’ll find San Francisco Maritime National Historical Park features the boat-shaped Maritime Museum and the Aquatic Park. Fun fact – the city harvested tombstones from relocated cemeteries in the early 1900s to form the breakwater.

After you pass Fort Mason, the scenery changes. Tourist boutiques give way to the green grass of Crissy Field as crowded sideways turn into the pavement of the San Francisco Bay Trail that loops alongside its namesake. Notable points of interest along this trail are the Wave Organ which lets the tides play music and the degaussing station used to remove the magnetic field from ships to protect them from mines. Two miles later, you reach the Golden Gate Bridge crossing over the mouth of the bay. If you are, in fact, biking you’ll climb up through the paved streets of The Presidio and cross over Golden Gate Bridge. If you’re on foot, your walk will turn into a hike as you climb the trails and switchbacks up the bluffs.

I drew the route continuing on the Battery Trail under Hwy 101. However, if you have time, you could take a side trip on foot out onto the bridge. It’s an experience for all senses as you feel the wind on your face and the bridge swaying ever so slightly under your feet. A couple of other worthwhile excursions here are the walk out onto Torpedo Wharf and checking out the Civil War-era Fort Point. Also, the Warming Hut at the end of Torpedo Wharf is the last best stop for food you’ll have in a while so keep that in mind. 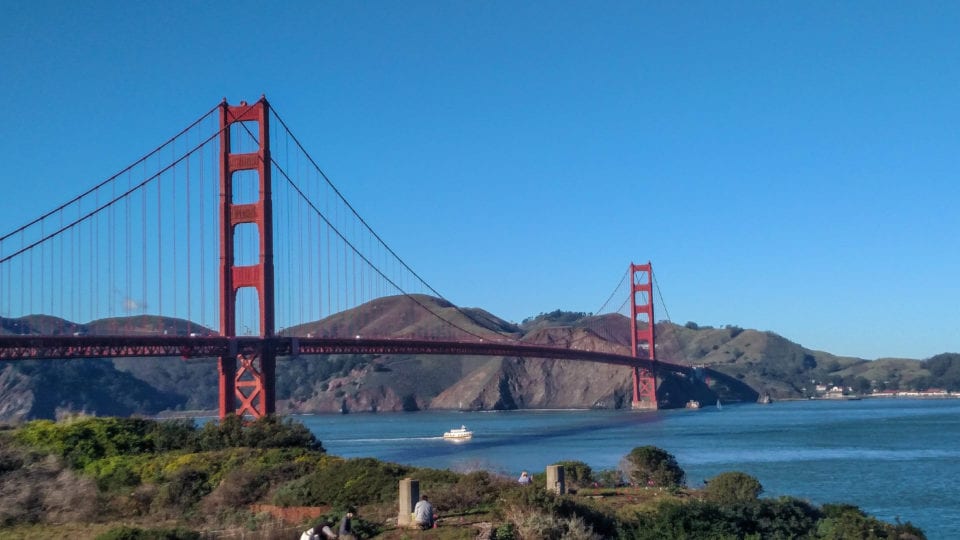 The forts and degaussing station hint at the strategic importance of the Port of San Francisco. Other telling sites are the batteries (dug out fortifications) that line the mouth of the bay. The threat of Japanese invasion and airstrikes were enough to plunge San Francisco into defensive blackouts during the winter of 1941. Today, they mark some of the best vistas along the coast.

The batteries are connected by a series of trails with names like Battery Trail, California Coastal Trail, and the Batteries to Bluffs Trail. This trail sequence passes through the community of Sea Cliff before continuing on the Land’s End Trail. I called out taking the Batteries to Bluff Trail for a little variety, but you have options. The California Coastal Trail runs along the top of the bluffs allowing you to preserve your elevation. If you don’t mind the hills take side trails down the numerous secluded beaches along the way. These are legit trails with expansive ocean views and distinct photo ops for Golden Gate Bridge. I could only imagine this natural beauty during a super bloom year.

These are western facing bluffs that look out onto the open ocean which makes them the perfect vantage point for golden sunsets and fog banks marching into shore. Don’t forget the Cliff House dining with a view and the N-Line light rail as an access/exit point.

I drew this segment up roughly following the race course for Bay to Breakers with a few modifications. I kept the route along John F Kennedy Road through Golden Gate Park, but I called out walking on the sidewalks instead of running in the road. I also put a jog in that takes you down Haight Street in the Haight-Ashbury District. These are the cool, eclectic shops in a hip section of town. Purists argue that it’s too commercial for its Beatnik roots, but that shouldn’t stop you from enjoying the experience.

I’ll be honest, I drove the next section and parked for Haight-Ashbury. For the purity of this article, I’m assuming that’s not an option. The Painted Ladies (those beautiful houses you’ve seen on the slanted road) and Alamo Square are interesting, but maybe you can talk your Uber dude into taking you on a drive by. Alternatively, if you already have your Painted Lady shot, you can catch the N-Line by talking Cole St to Carl St.

For the strong and pure of heart, you’re on foot hauling uphill. Great eateries like Souvla Restaurant reward your efforts in Hayes Valley and its namesake main drag. Once you reach the Civic Center, you’ll find public art and architecture everywhere with notable eye candy like San Francisco Public Library, Asian Art Museum, and even a Venus de Milo Statue. You’ve done it. Loop closure more or less complete. Time to take the Civic Center BART back from whence you came. 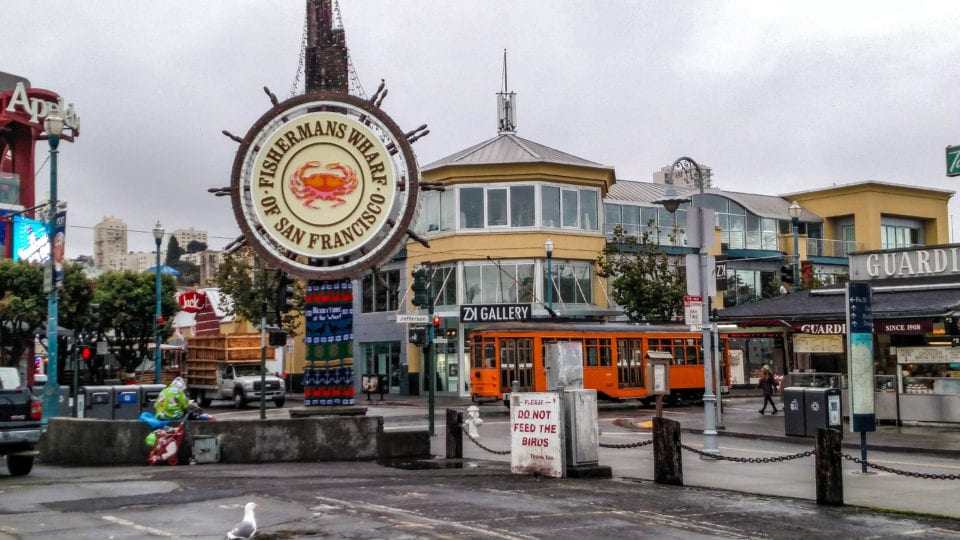 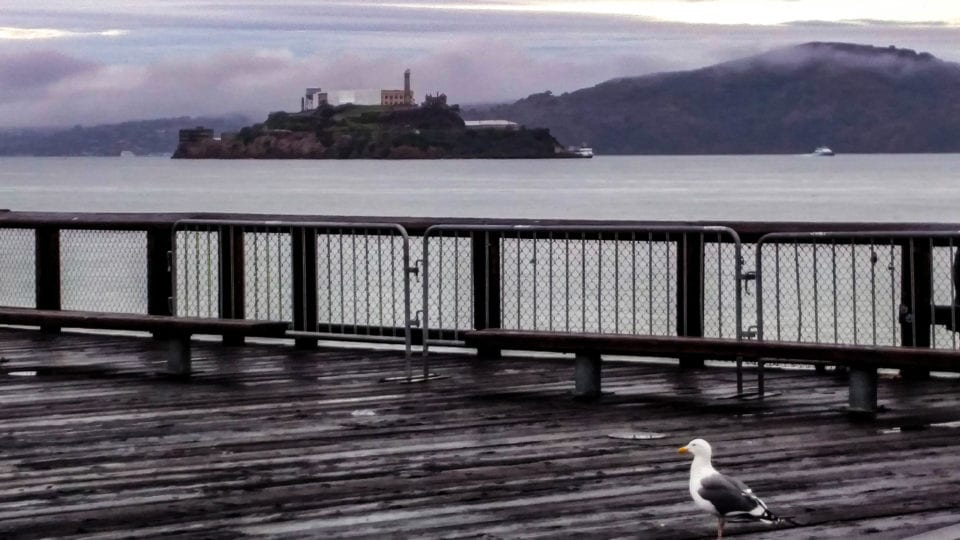 The four primary walking tours can be combined in many ways depending on interest, time, fitness, weather, and pain tolerance. Here are some example walk tour itineraries and why you would choose them.

Link all four walking tours together end to end in a massive 18-mile loop just like the map says. You might do this if you only have one day in San Francisco and the only thing bigger than your FOMO is your calves from all the hiking you do.

Take Knob Hill to Fisherman’s Wharf, Along the Waterfront to the Presidio and Batteries to Bluffs bypass the Golden Gate Corridor by taking the N-Line back to Powell Station. This modification reduces the total mileage to a very doable 12-mile day and lets you enjoy the sunset at Point Lobos / Ocean Beach. Be sure to check out the happy hour at Cliff House (M-F 4:00 – 6:00). I would seriously consider walking Ocean Beach to the Judah N-Line light rail station.

Sled Ride to the Pier

By utilizing the N-Line train, you can get in and out of the Golden Gate Corridor from Civic Center Station. On one end is Carl St Station and Haight-Ashbury. On the other end is Ocean Beach, Golden Gate Park, and the Judah Station. The route works perfectly well going either direction. You’d do this if you love Golden Gate Park or Haight-Ashbury or if you want a day-2 complementary walk to any of the other San Francisco walking tours above. 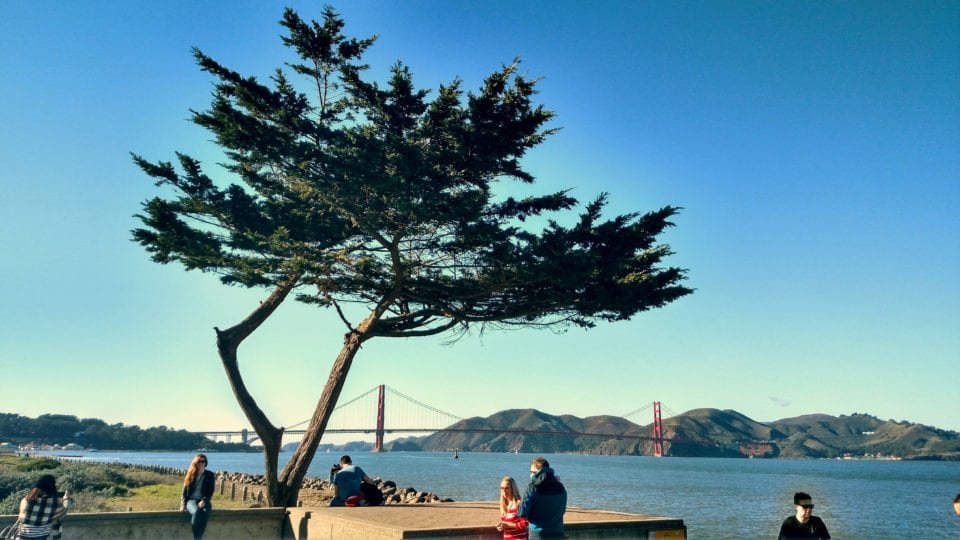 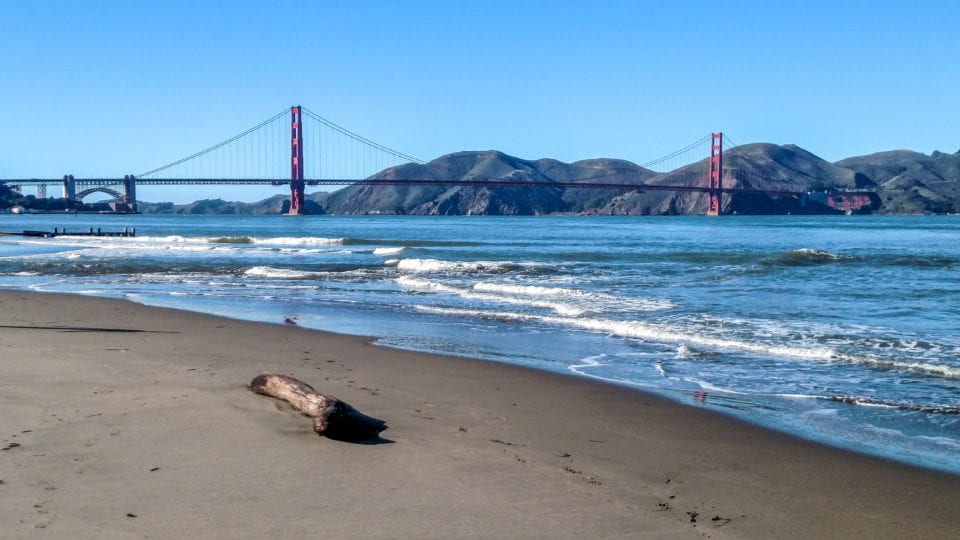 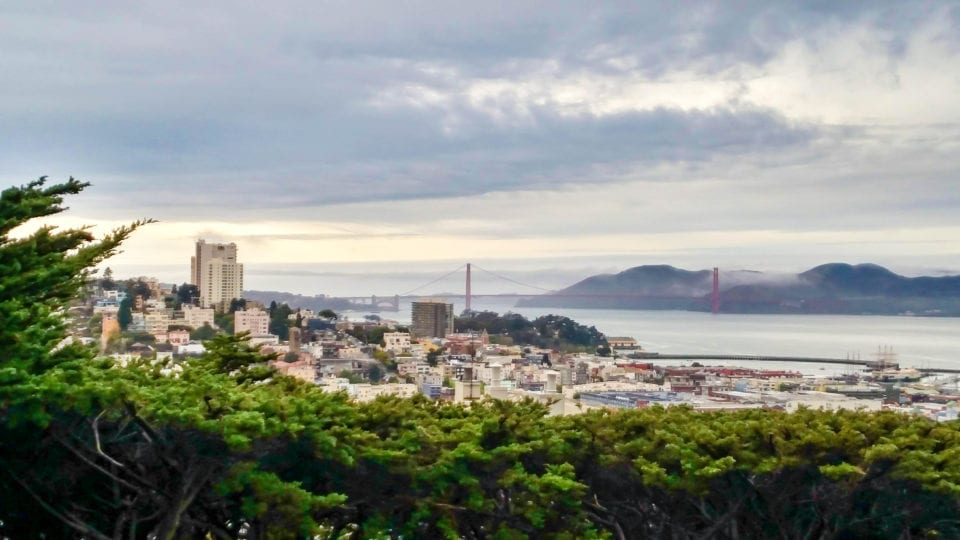 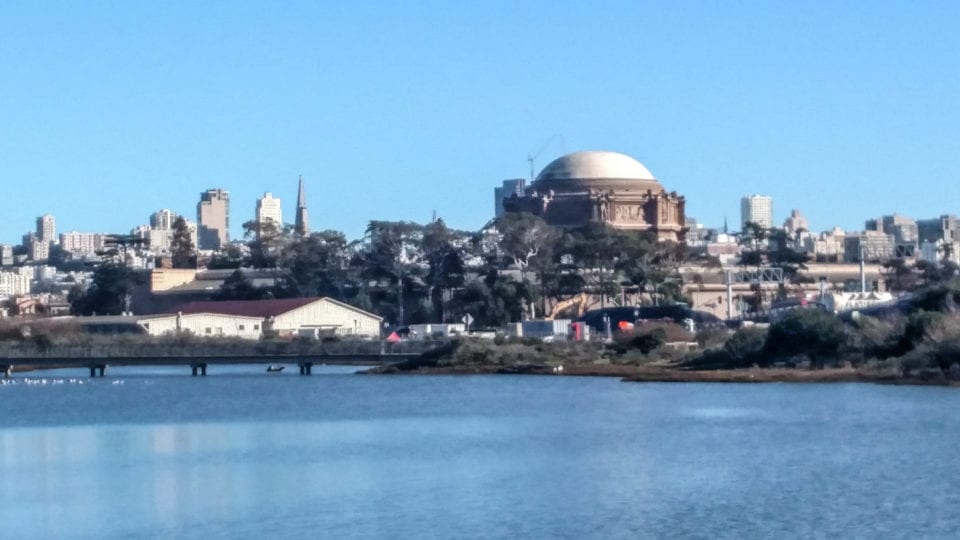 San Francisco walking tours self-guided routes were my favorite part of the City by the Bay. Everywhere I looked, I saw a beautiful photo-op, and every corner held an eclectic restaurant beckoning me in. Best of all, walking kept me out of hellish traffic and expensive parking. Make sure you check the weather link before heading out because San Francisco’s weather is as fickle as the city is beautiful. Generally, it’s rainy in the winter months from November through March. During the summer, it has a Mediterranean climate with fog rolling in mornings and evenings during June, July, and August.

This guide makes for a very long day trip or an action-packed weekend. If you’re staying longer, there are plenty of things to do outside of San Francisco too. This list goes on and on, but some of our favorites are wine tasting in Napa Valley, hiking in the redwoods, and visiting Santa Cruz. 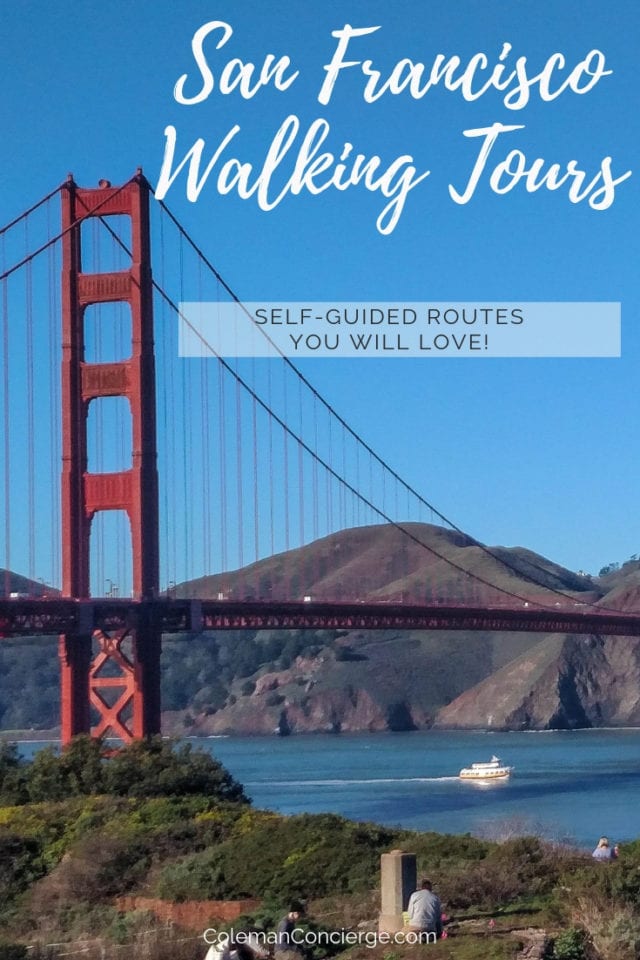 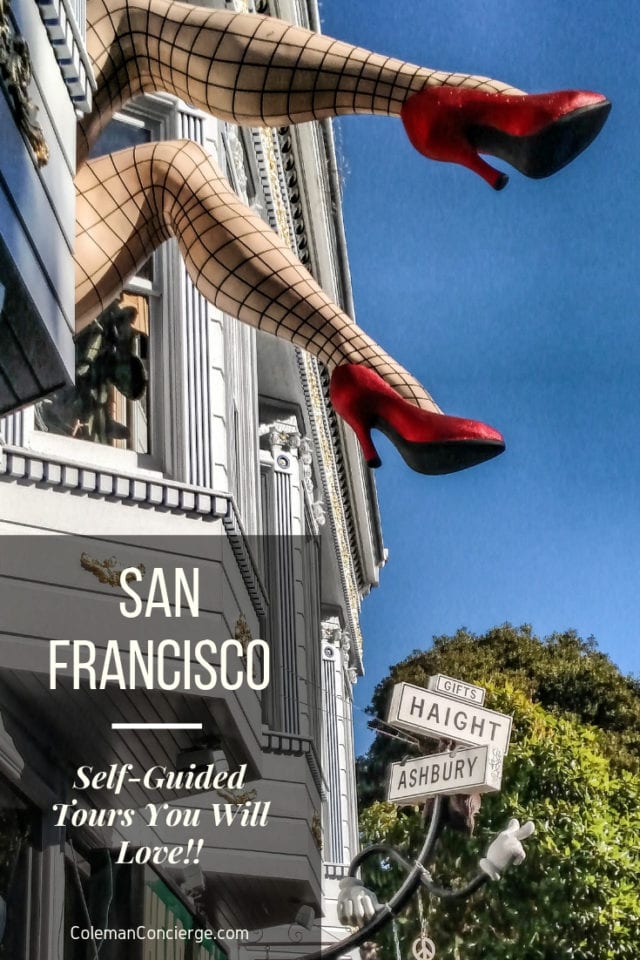