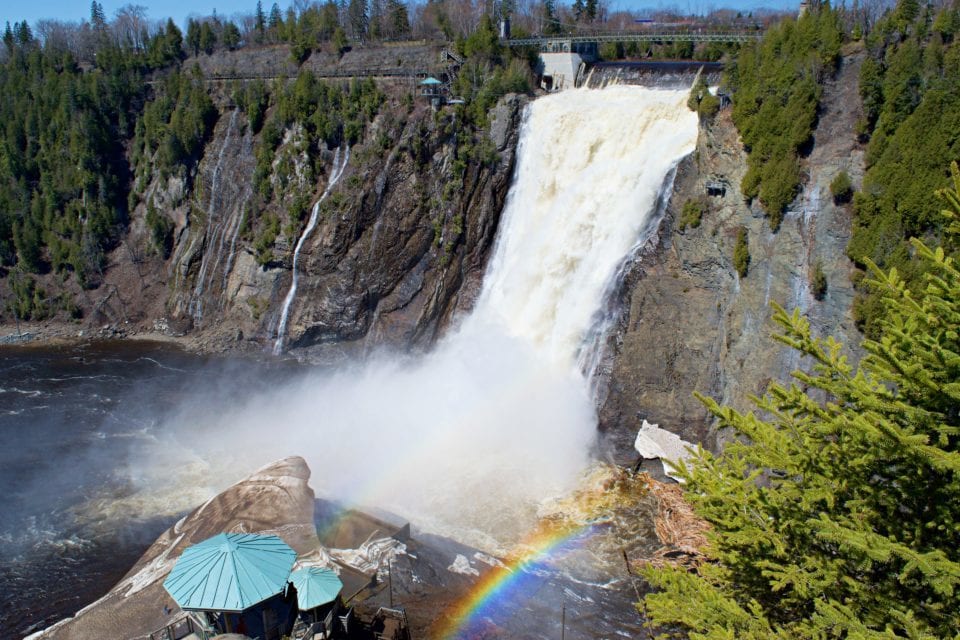 A Quebec bike tour is one of the most scenic ways to visit the majestic 275 feet high Montmorency Falls. Quebec City is renowned for flat, easy bike paths, and, with a little research, we found a way to combine these two great activities into one highly enjoyable 1/2 day excursion.

Cyclo Services put together a fantastic package that included superb equipment, a knowledgeable guide, safe riding, and the magnificent Montmorency Falls at the end. This trip is a perfect introduction to bike touring and the Quebec countryside. 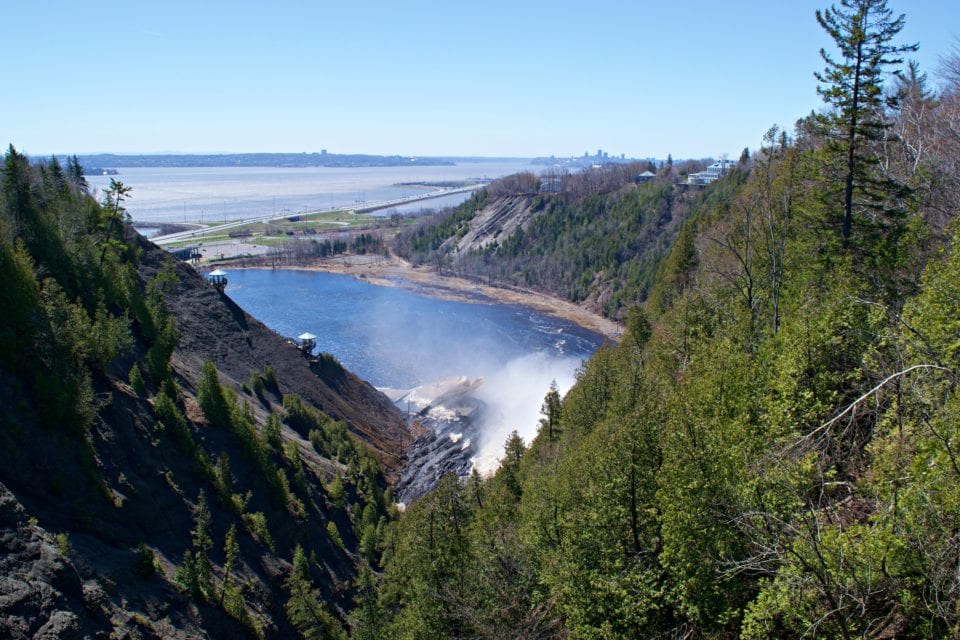 The First Quebec Bike Tour of the Year

We were on a romantic Quebec City spring getaway in early May. In the Great White North, the weather was leaning more towards April Showers than May Flowers. We contacted Cyclo Services, who were very responsive but uncertain if they were going to run the tour this early. They were able to pull it out and, luckily, we had the most beautiful, sunny weather of our trip on bike day. 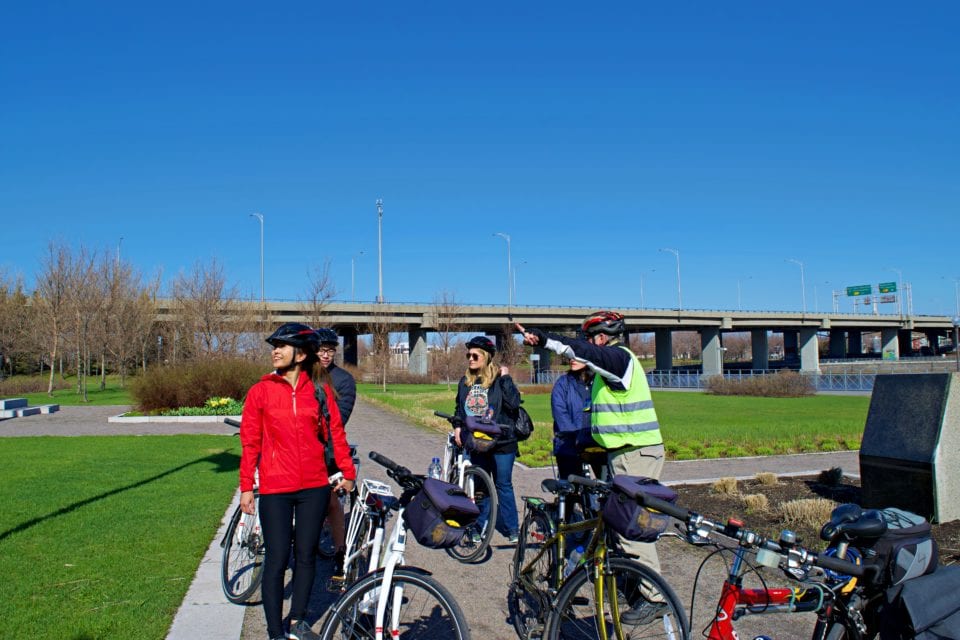 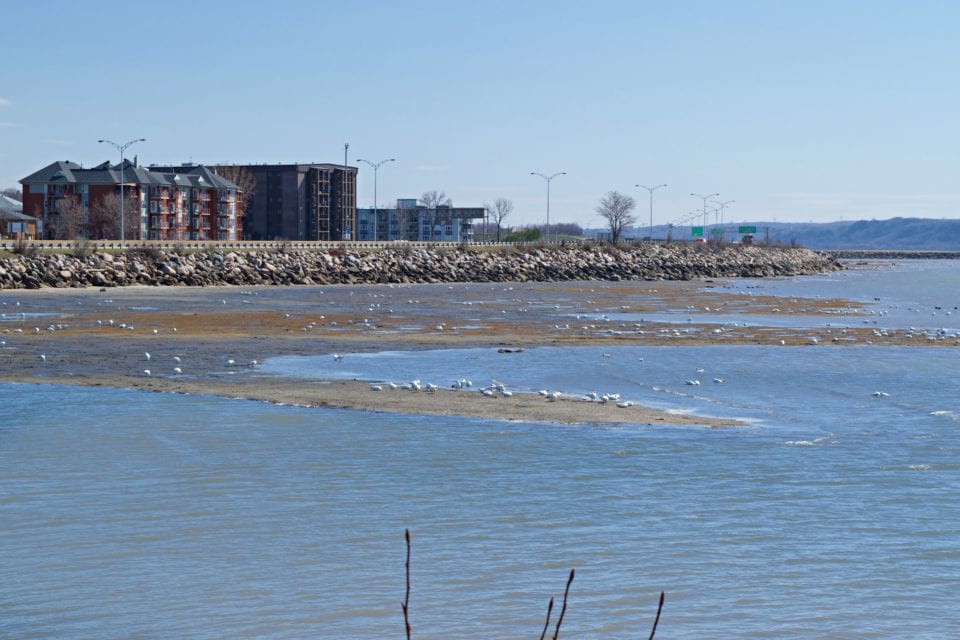 Getting Fitted for Our Bicycles

I (Jenn) ride often, but I am very particular about my bike geometry. I am a complete T-Rex with little arms that usually require a female-specific geometry for the frame. They had a perfectly suitable bike for me.

They tuned the bike correctly for my body, much like I described in  the 10-tips for bike touring. The equipment was, simply put, the best rental bicycle I had ever ridden, almost as good as my women’s specific hybrid back home.

I routinely ride 20-mile trips on the weekends, so the 16-mile bike tour didn’t phase me. We had a couple of friends on the trip who don’t routinely ride. Cyclo Services provided them with electric bikes, and they had no difficulty in completing the ride, even uphill.

The Littoral Corridor stretches for 48 kilometers between the city of Saint-Augustin-de-Desmaures and the Montmorency Falls, mostly along the Saint Lawrence River. We entered just around the corner from the shop, and there was a dedicated bike trail for most of this route. Usually, the tour takes the path the entire way to the falls, but we made a small detour (more on that later).

Luckily for us, we were only going 12 km (8 miles) down the path and back. I would love to return and see where the other half of this trail goes and all the different bike paths around Quebec for that matter.

Just a little way down from the shop, we visited a lovely park called Domaine Maizeret. This 27-hectare park has a historic chateau, manicured gardens, and groves of flowering trees. It would have been stunning a few weeks later into the spring. In early spring, we cruised in to look at the map and imagine what it would look like in a couple of weeks. 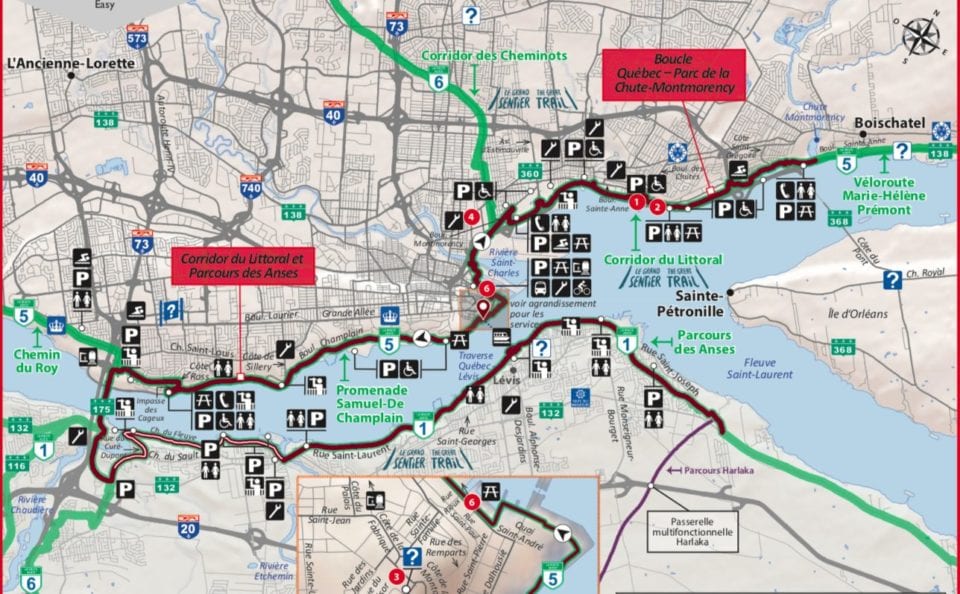 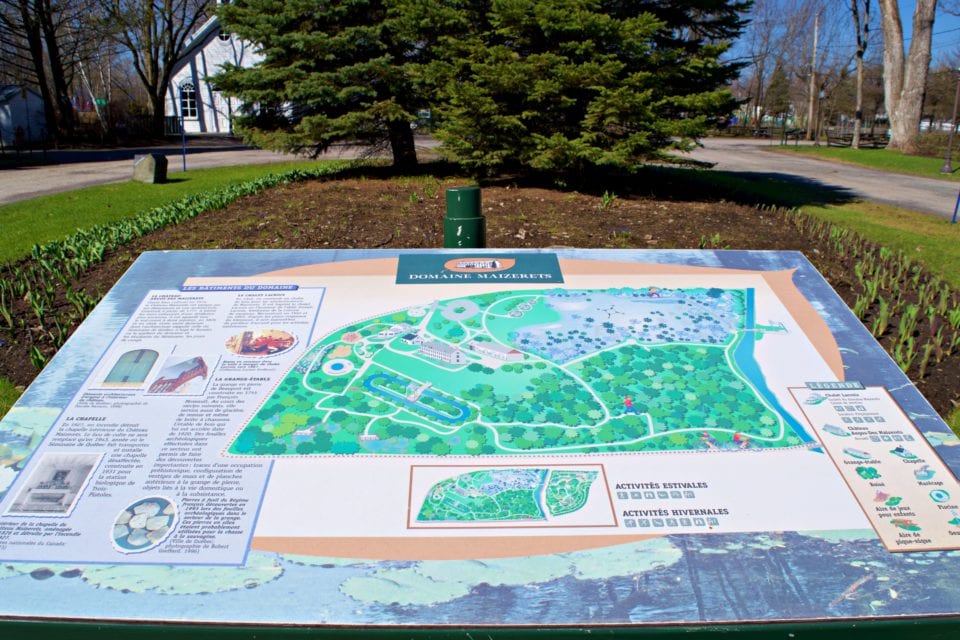 A little bit past Maizeret, we pulled off the trail and entered some quiet neighborhoods. The cable car from the river to the top of the falls wasn’t working that day, so our guide found an alternate route.

I wish I had my GPS on since this route would be perfect for self-guided tours if you want to avoid the round trip ticket on the cable car(~$15) and parking (~$10 for a car). Just knowing that there is an upper road route can help you ask questions at the bike shop or take a taxi. We had to climb about 300′ of hills to reach the top, but it wasn’t difficult at all. 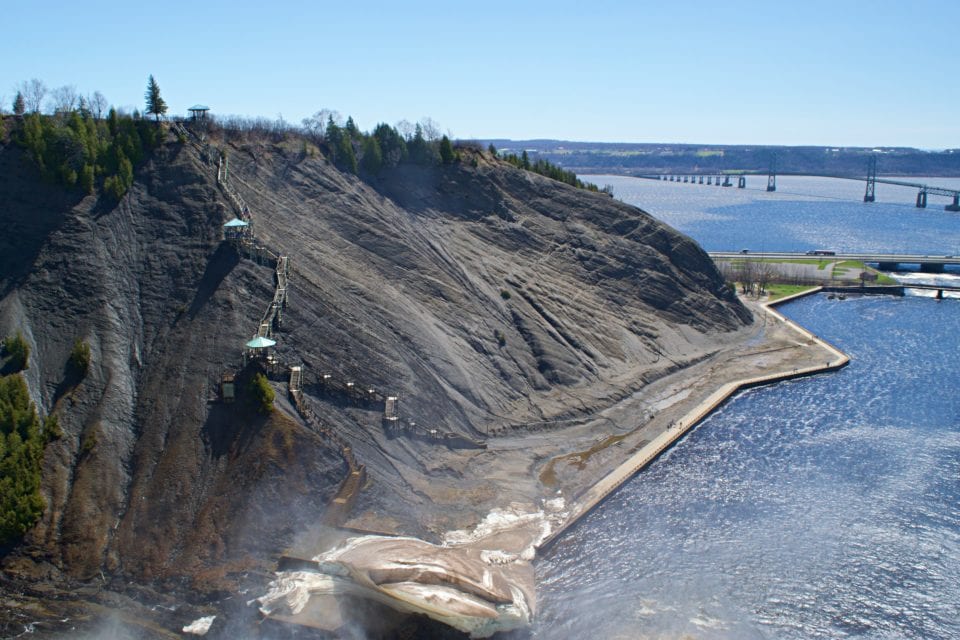 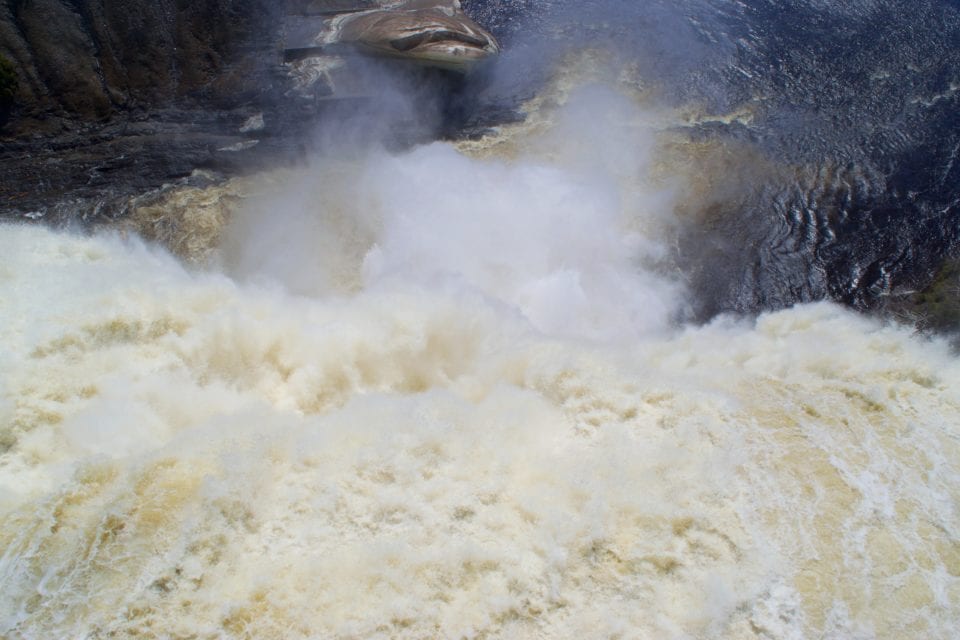 Montmorency Falls were everything that you’d hope dreamed of in a 275′ waterfall. Massive amounts of water were pouring over the lip in one big stream. We entered the first observation deck, and I could feel the cool mists blowing off the falls. We climb a couple of flights of stairs to reach the suspension bridge that crossed the river. It felt very solid and afforded rare aerial views of a waterfall. My favorite vista point was from the far side of the falls. Here, the sunlight passing through the mist created rainbows.

I look forward to returning to Montmorency Falls to try the zip line ($26.00 May-October) and the Via Ferrata climbing route ($48.50 – $34.50 June – September). I might enjoy coming in winter if I am at the Winter Carnival to see the 90′ sugarloaf ice formation at the base of the falls and snowshoeing. Montmorency Falls is our kind of place for some fun little outdoor adventures. 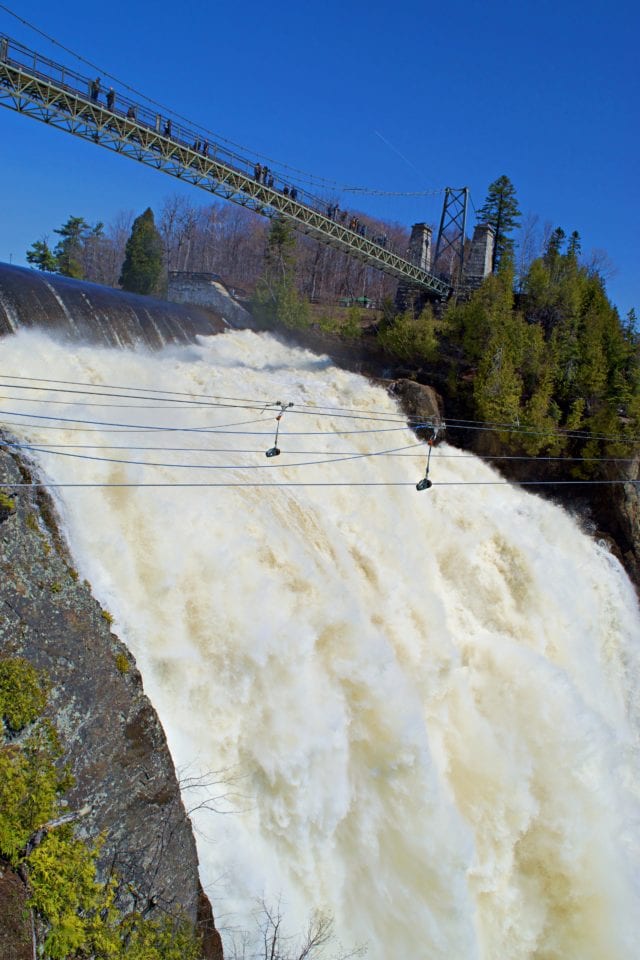 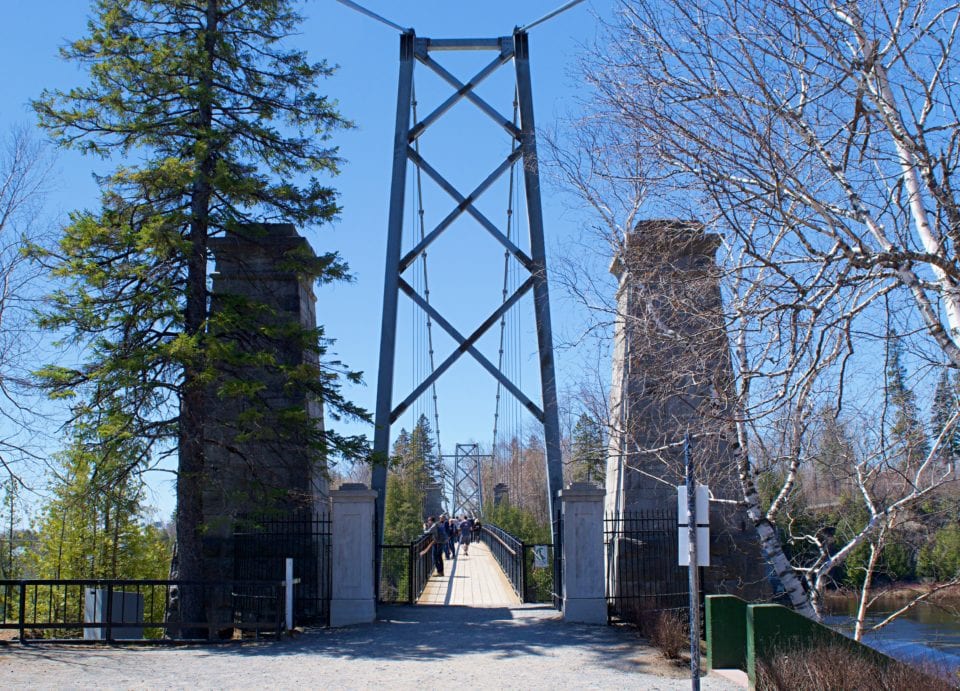 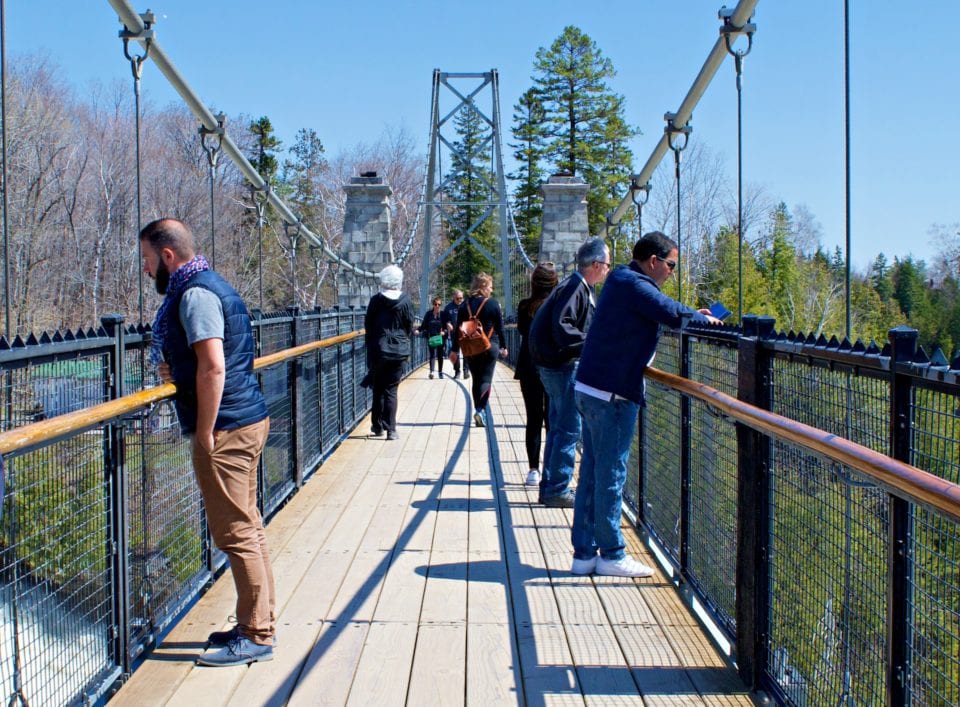 You might guess by now that we enjoy a good ghost story. The White Lady of Montmorency Falls, in Quebec (a.k.a. “La Dame Blanche de Montmorency), is a sad story that resonates with Quebecois culture. The story goes like this:

Many years ago, when Quebec was still a French outpost, there were two young lovers. They dreamed of their wedding day, but before they could get married, the young man was called into active duty to defend Quebec from the Brittish.

He died during the Battle of Montmorency Falls, and his betrothed, overcome with grief, searched for him at the falls for over a year. She would call his name, and never get an answer. Eventually, sadness turned to utter despair, and she went to the falls one last time.

Wearing her wedding dress, she flung herself over the falls into the churning waters below. They never found her body, but people say they can see a woman in a wedding dress in the mists of the falls on certain days. I couldn’t help but look a little longer into the mist to see if the legends were true. 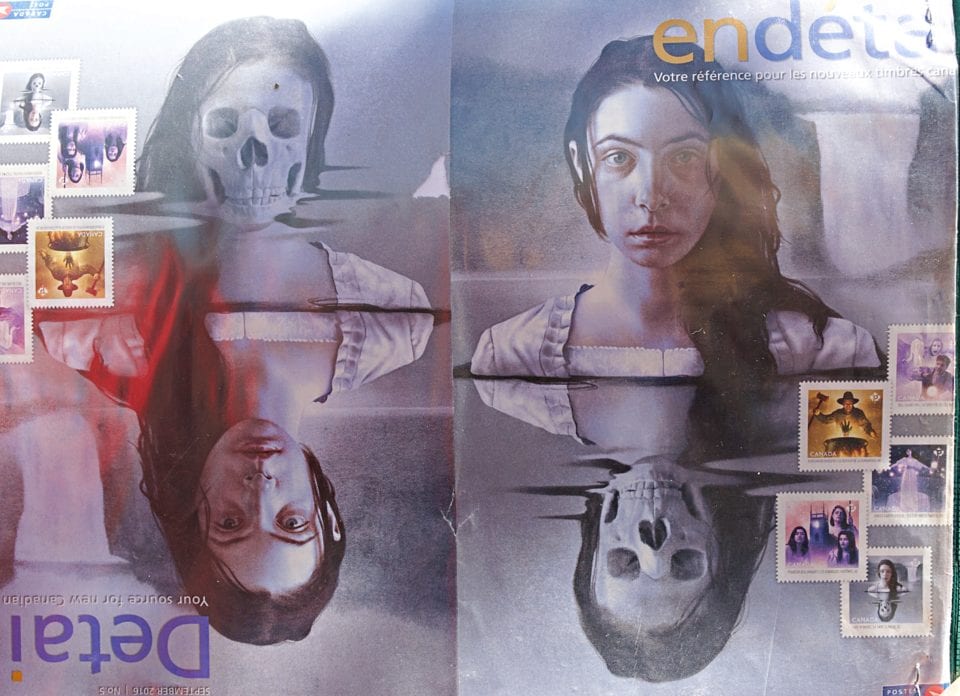 Cyclo Services was a quality company from top to bottom. They had first-rate equipment, excellent guides, and even their snacks of dried cranberries and local cheese were outstanding. I can honestly recommend their services and, if the weather is good, biking in Quebec. Located at 289 Rue Saint Paul, they are right in the heart of the old city.

They offer an assortment of guided bike tours for the beginning to moderate rider featuring:

For us, biking has always been a language of love and the best way to explore a new area. Our second date was a bike ride together down the Rialto River Trail in Tucson Arizona. Our first big international trip together was a 150 miles ride through Thailand. With the natural romance of Quebec City, how could we pass up a Quebec Bike Tour? 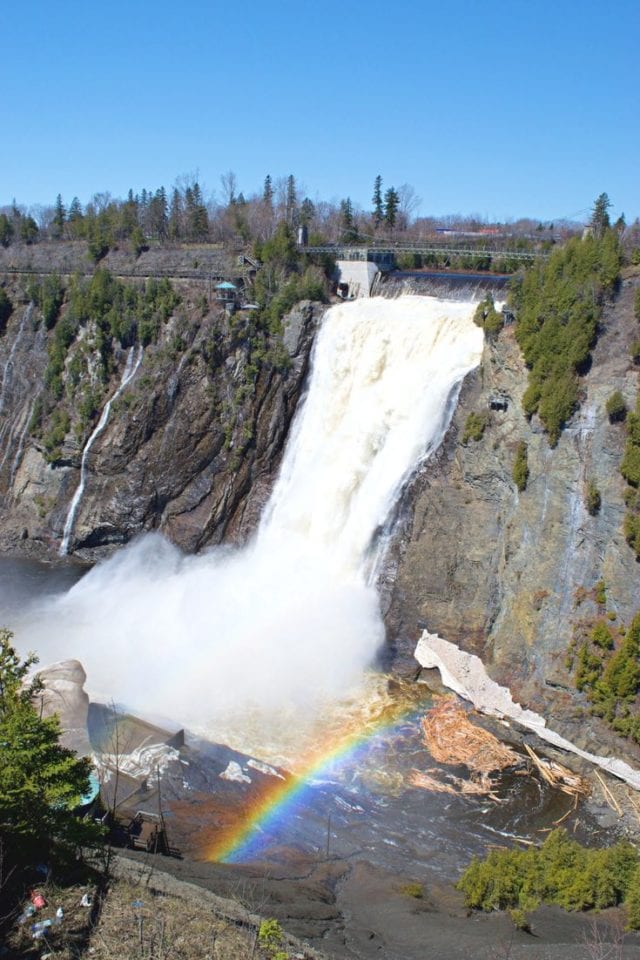 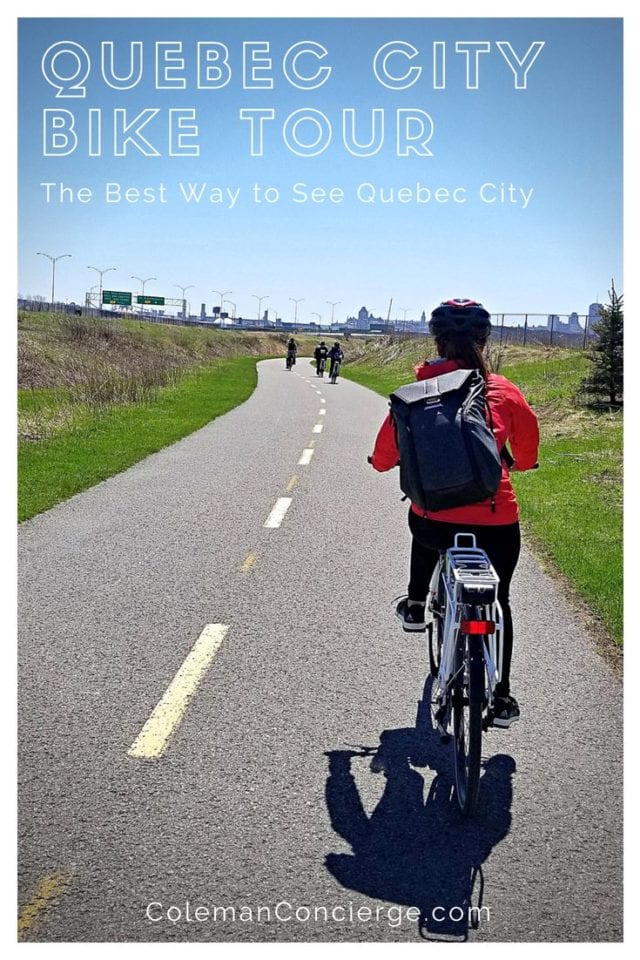 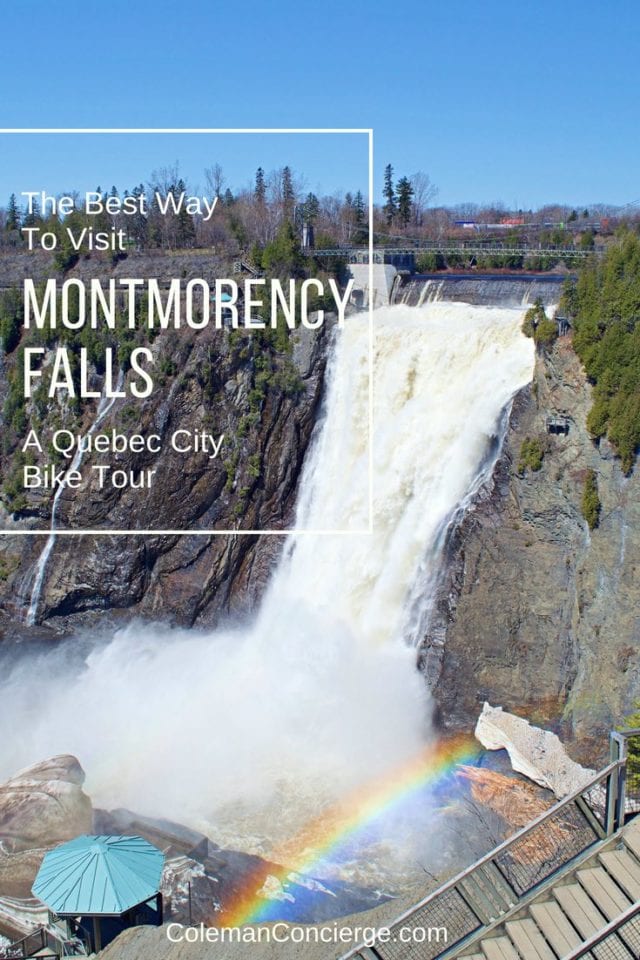