So you are planning a trip to Egypt and are wondering if you should take a luxury Nile cruise. We say “YES” and have seven fantastic tips to back that up. Read on to learn more such as: 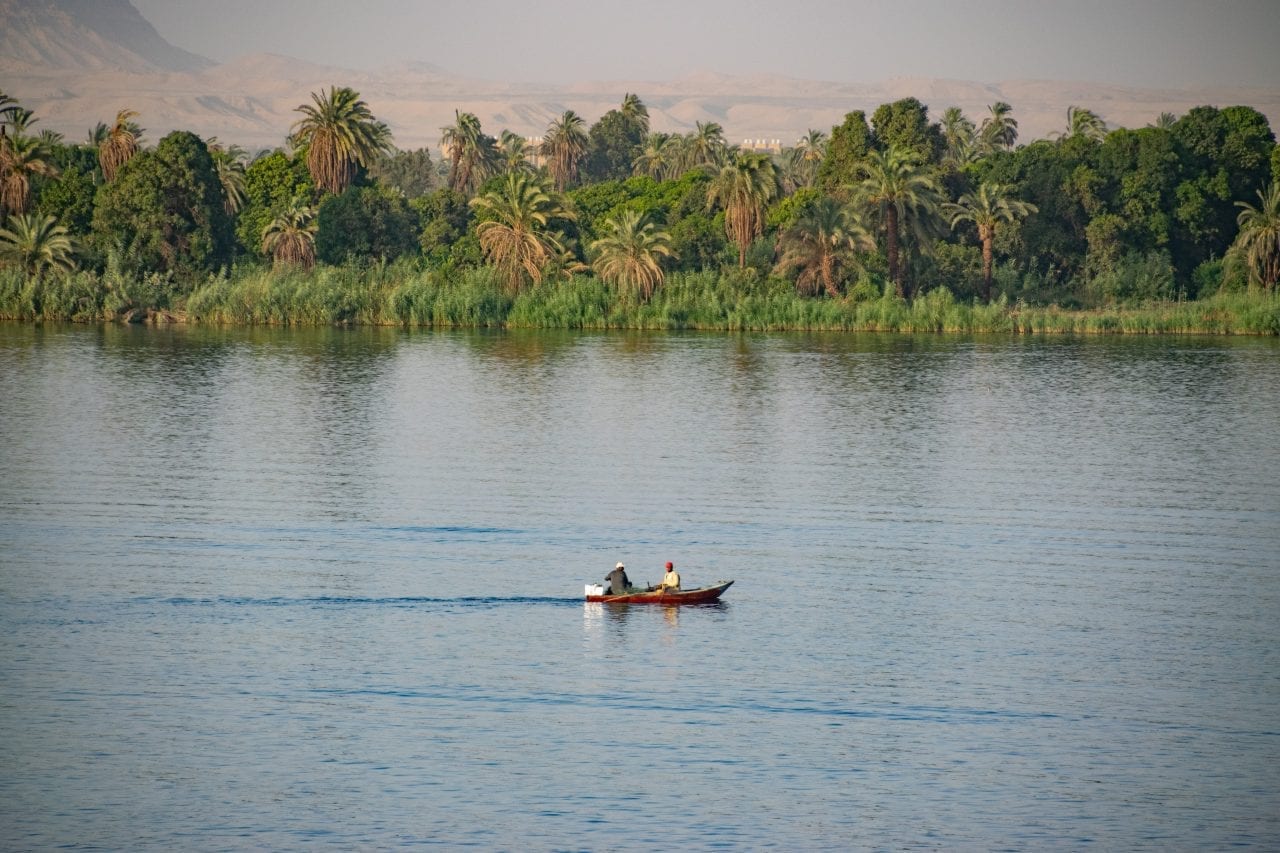 Why Take a Nile River Cruise At All? 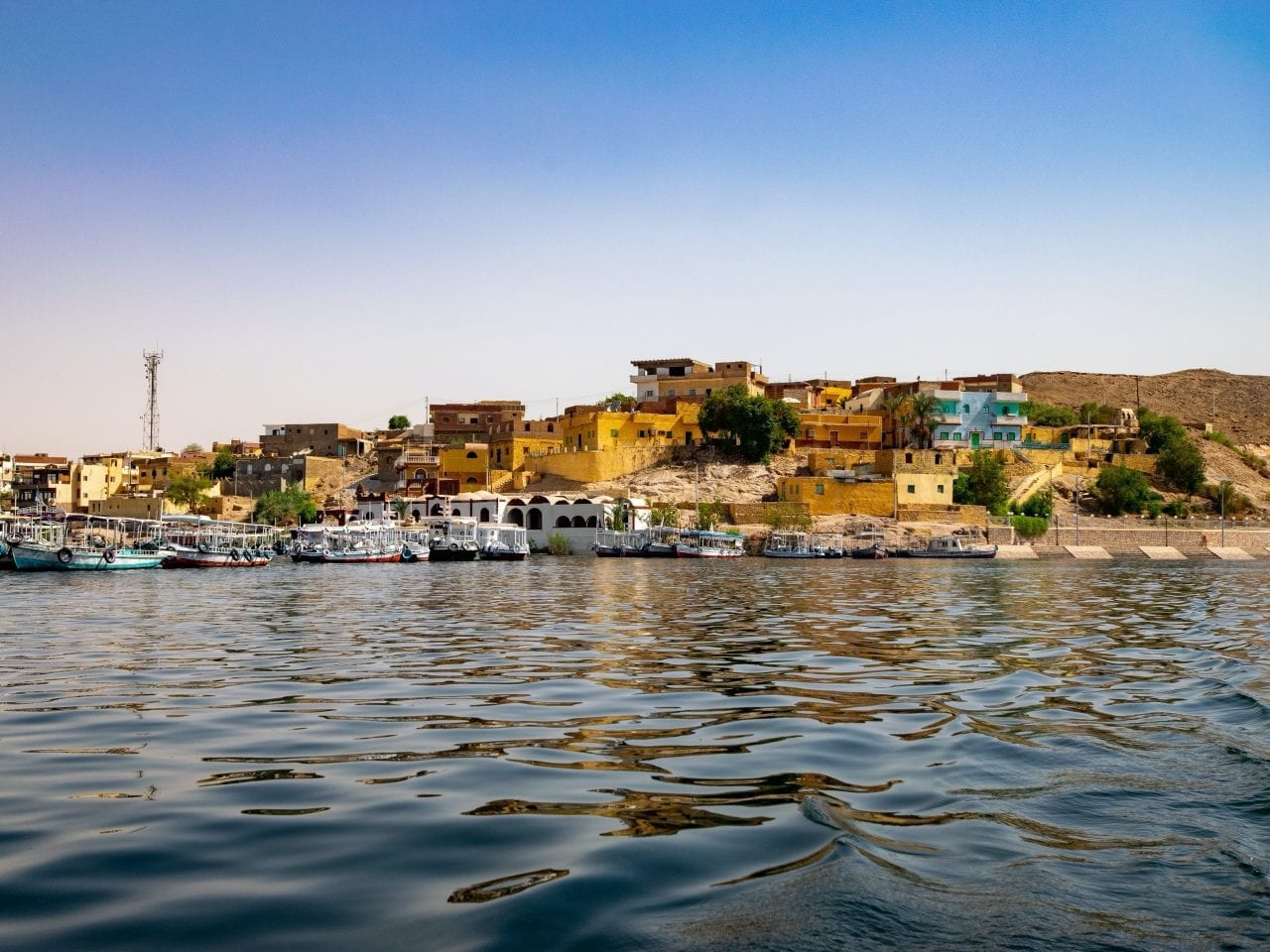 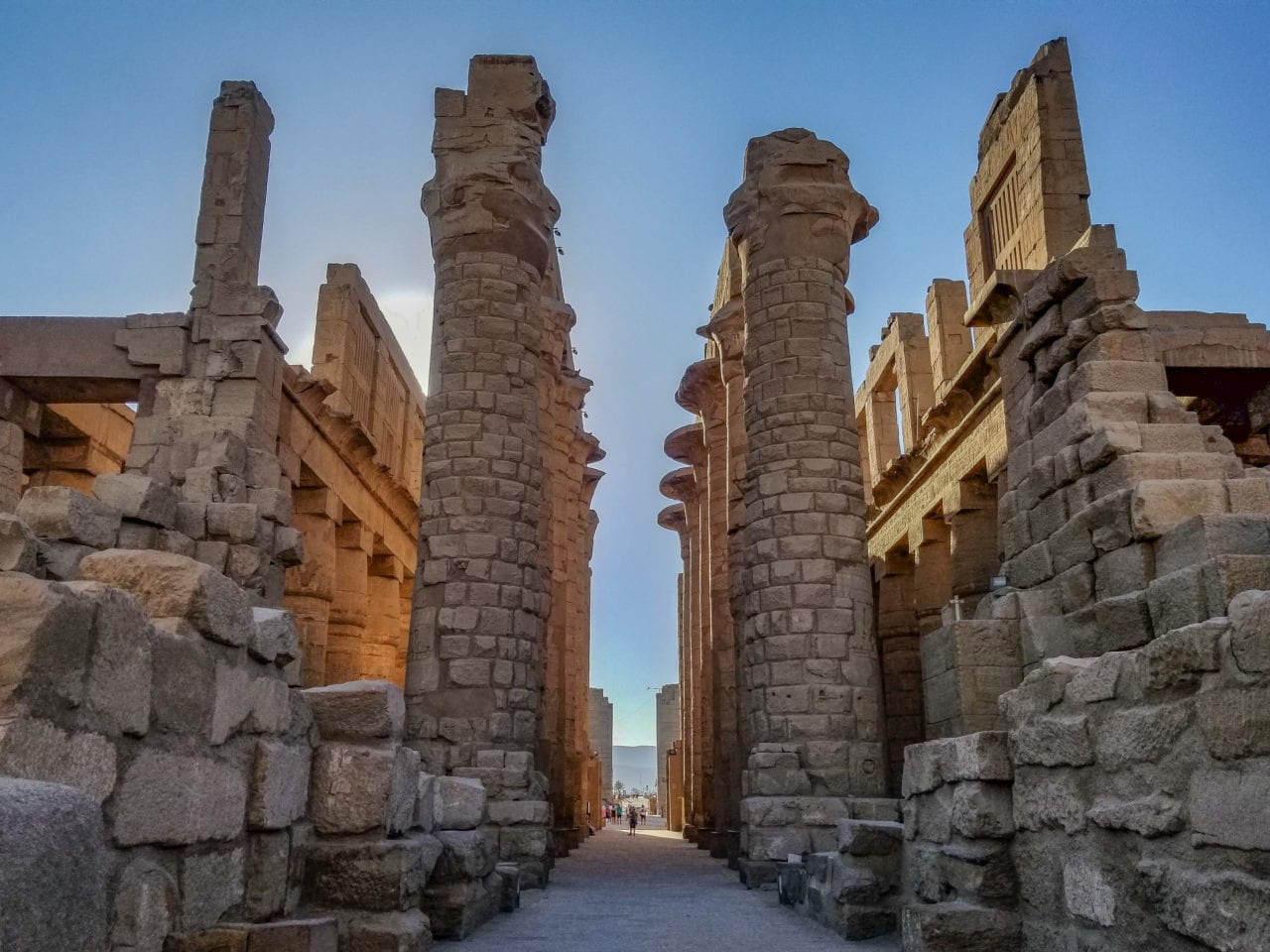 Google Maps says it’s just over four hours to drive from Luxor to Aswan, so why bother with a river cruise at all? You can base in Luxor and take a package tour starting at $100 to see the sights down to Aswan by by car or by plane. You can see the sites, but you will not experience the Nile. I wrote a travel narrative about why Egypt is still a must-see destination. That story would not have been complete if I had not experienced life on the Nile.

Waking up on the Nile, you feel connected with the ancient spirit of the land. Birds take flight in the cool early dawn while the tranquil blue waters lap softly against the green shores. It’s this lush scene that shaped one of the greatest civilizations the world has ever known. Being on a Nile River cruise lets your mind rest while the ancient world comes to you at its own leisurely pace.

Stops on a Luxury Nile Cruise Luxor to Aswan 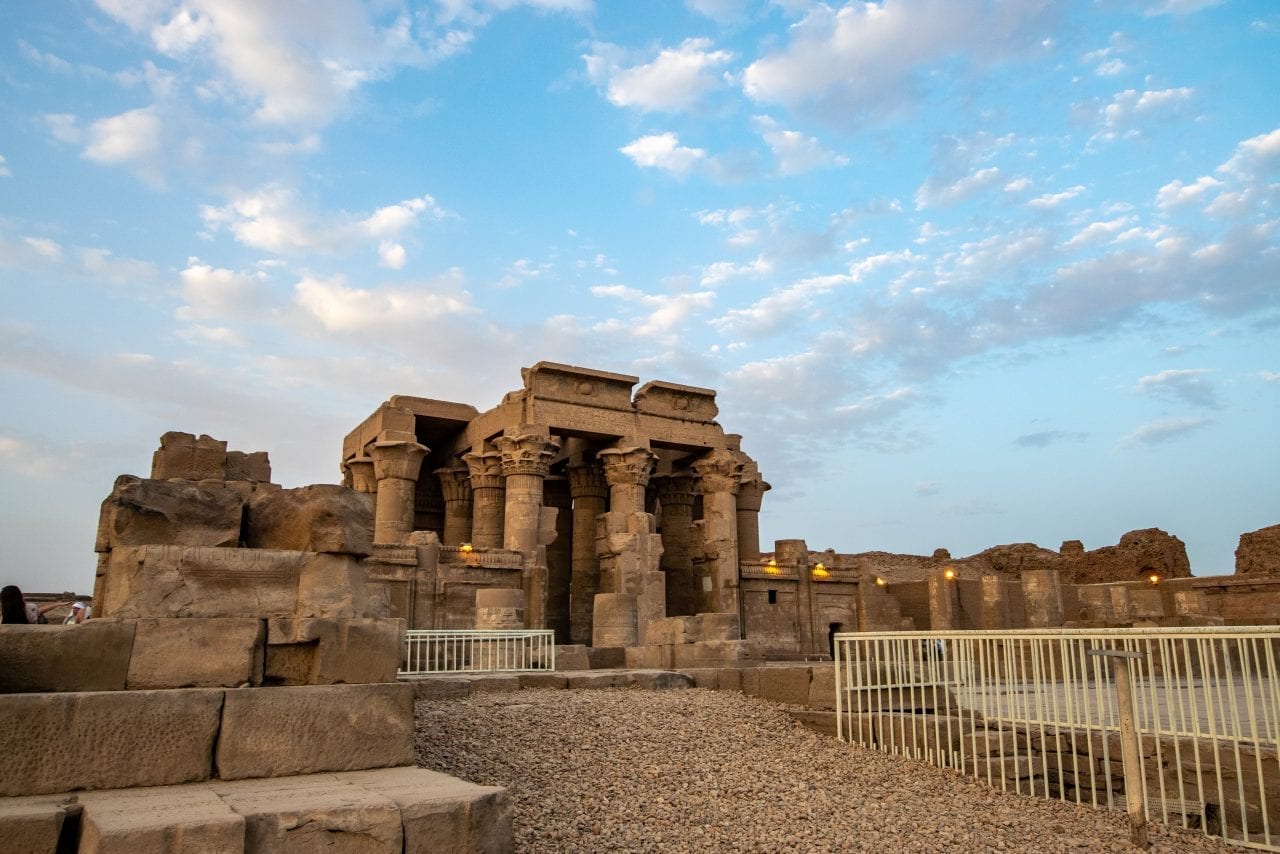 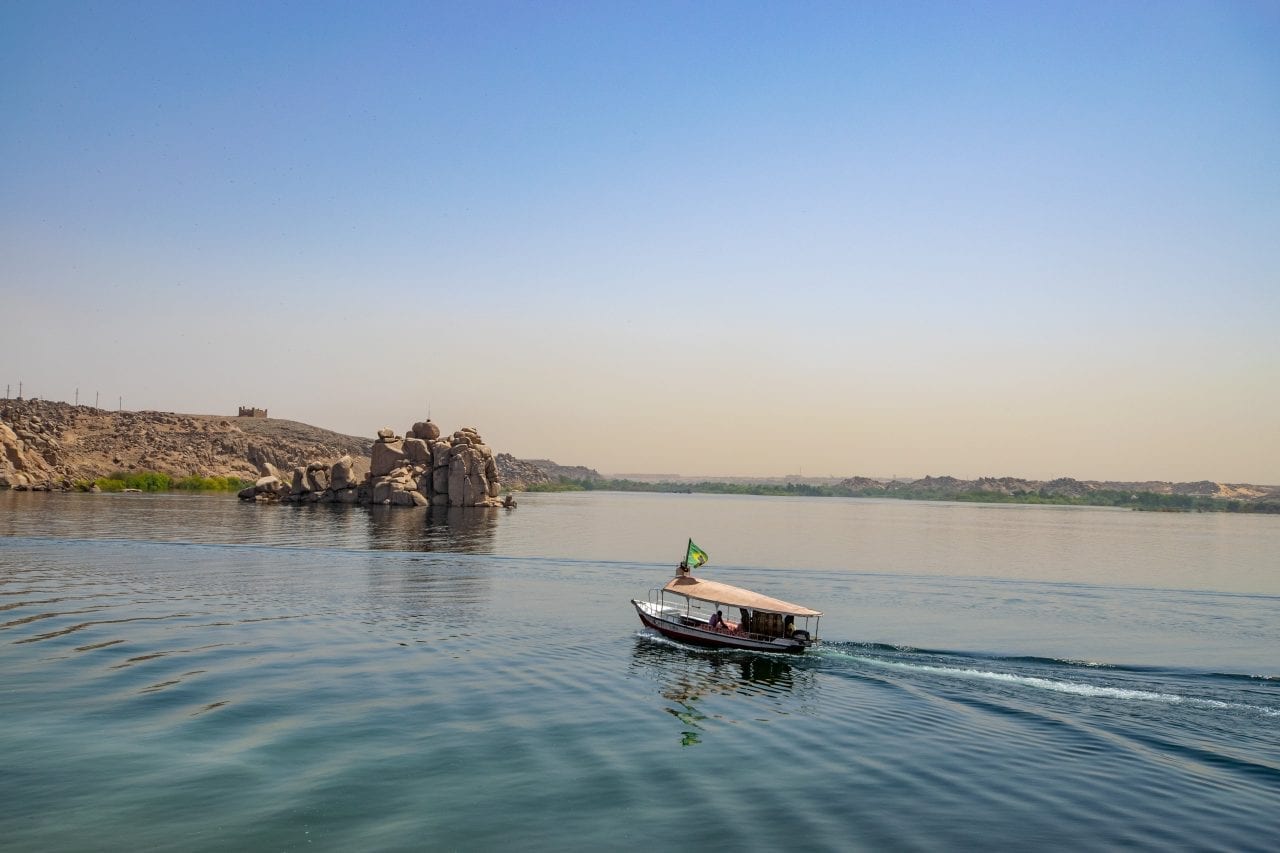 What sights will you see on a Luxury Nile cruise from Luxor to Aswan? Luxor, not Cairo, was the seat of power for the Middle and Late Egyptian Kingdoms. We’ll talk about that next, but it sets the stage that there is a lot to see around Luxor. There are the massive temple complexes of the Luxor Temple and Karnak Temple on the town’s east bank. The west bank is home to the famous Necropolis or city of the dead. There you’ll find the Valley of the Kings, including King Tutt’s Tomb and the Valley of the Queens and the nearby Temple of Hatshepsut. It will take you more than a day to explore Luxor, so expect to stay on the ship in Luxor overnight.

As you start heading up the Nile, you’ll explore the ancient ruins of Edfu and Kom Ombo. In relative terms, these are more modern sites dating back to the Greek and Roman periods. The Greeks tried to unite Egyptian and Greek religions and built the temple at Edfu for the unified worship of Horus and Apollo as the same god. It’s one of the best-preserved archeological sites in Egypt. Kom Ombo is interesting because it was home to a crocodile cult (complete with mummified crocs) and depictions of what is thought to be the first surgery.

Your trip ends in Aswan, where the Aswan Dam blocks the Nile to form Lake Nasser. In ancient times, the same narrows where they build the dam was the end of the year-round navigable river. Aswan was the end of the empire for centuries. Here, you can experience a felucca ride on a traditional sailboat or ferry over to the Philae Temple, renowned for its powers of fertility and rebirth.

You’ll travel from the ancient capital to the edge of the empire, from the city of the dead to the temple of rebirth. The Nile cruise Aswan to Luxor will see the same sights, just in reverse. It doesn’t make a significant difference in which way you travel.

History Along the Egypt Nile River 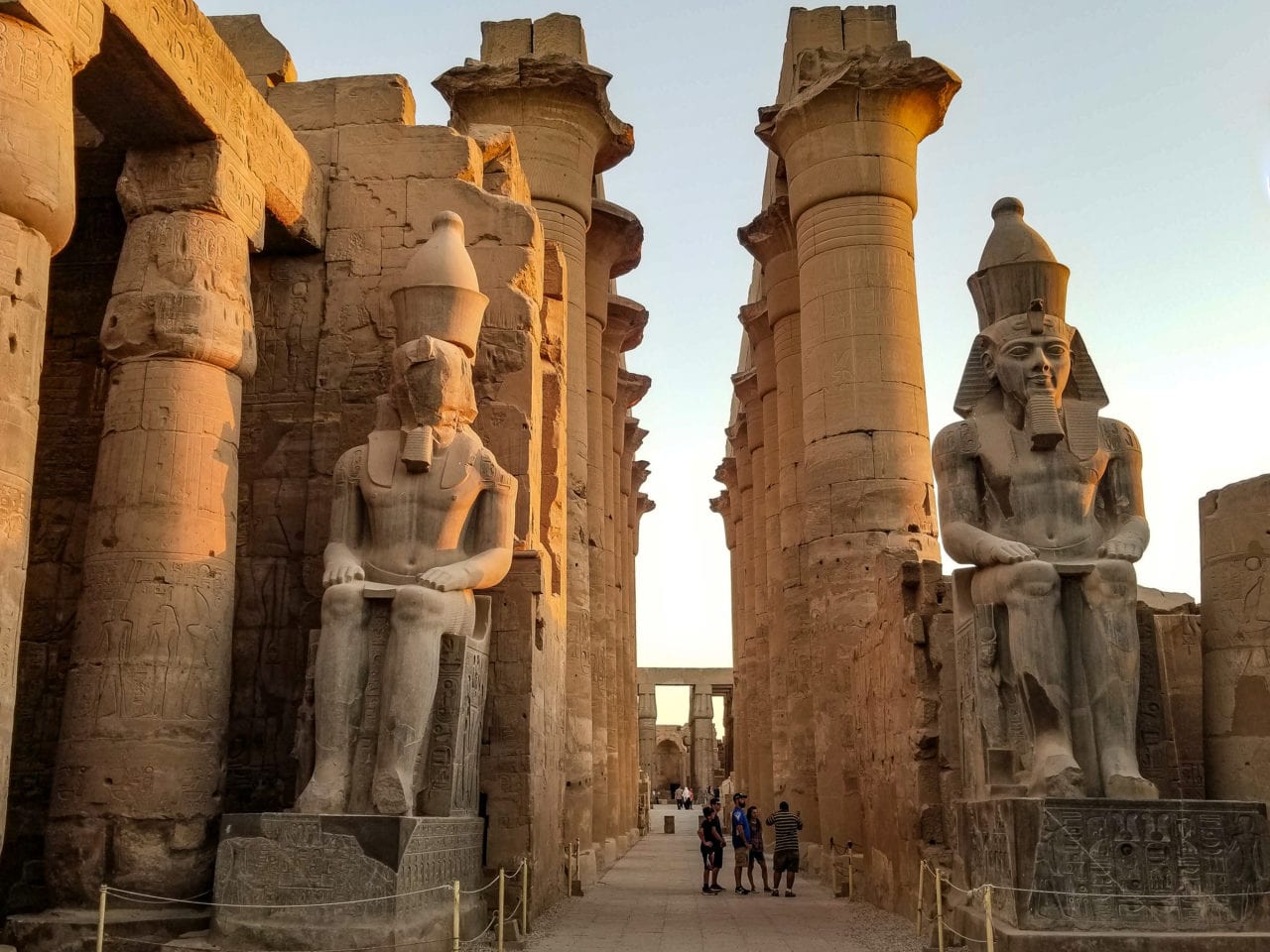 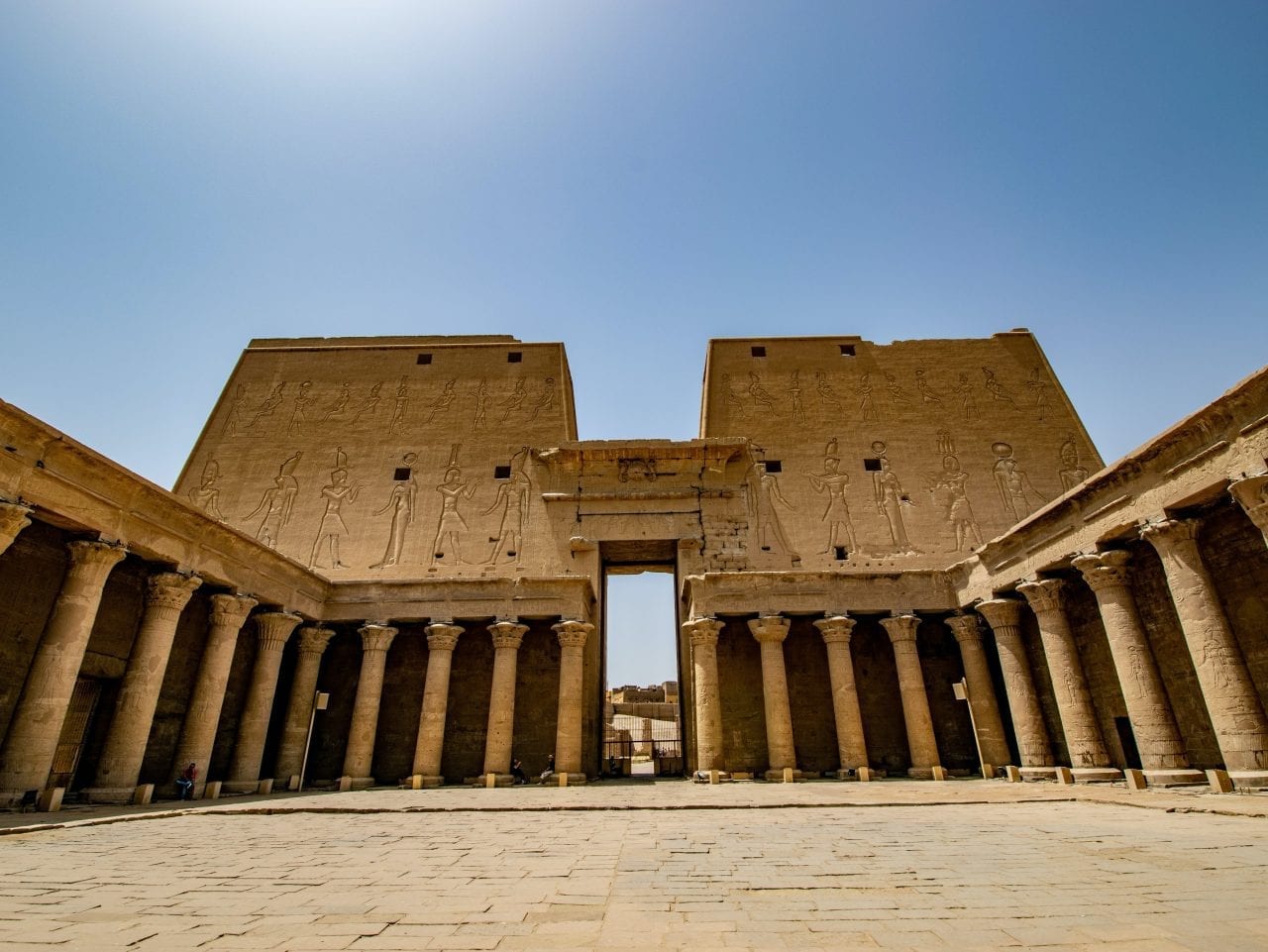 We promise that we will not go too deep on Egyptian History. We already wrote a whole post about everything you need to know about Egyptian History as a traveler. We want to hit the highlights so you’ll understand how much history there is along the Egypt Nile River.

The Ancient (and modern) Egyptian capitals were at the top of the Nile delta, near modern-day Cairo. Here, the rulers could control the agriculture and trade along the vast flood plain. However, Egyptian civilization spanned over 30 dynasties with over 170 pharaohs and lasted thousands of years. Most of that time, the Middle and New Kingdoms, had their capital at Luxor.

The Temple of Luxor was the administrative capital, while the Karnak Temple was the spiritual capital. When you visit, you’ll see this in the architecture. Luxor has a grand entrance, where you can imagine a powerful ruler addressing his kingdom. Karnac has a myriad of idols and gods presented, showing the diversity of worship in Ancient Egypt. Luxor’s significance in Egyptian History makes it a “must-see” on an Egyptian holiday. 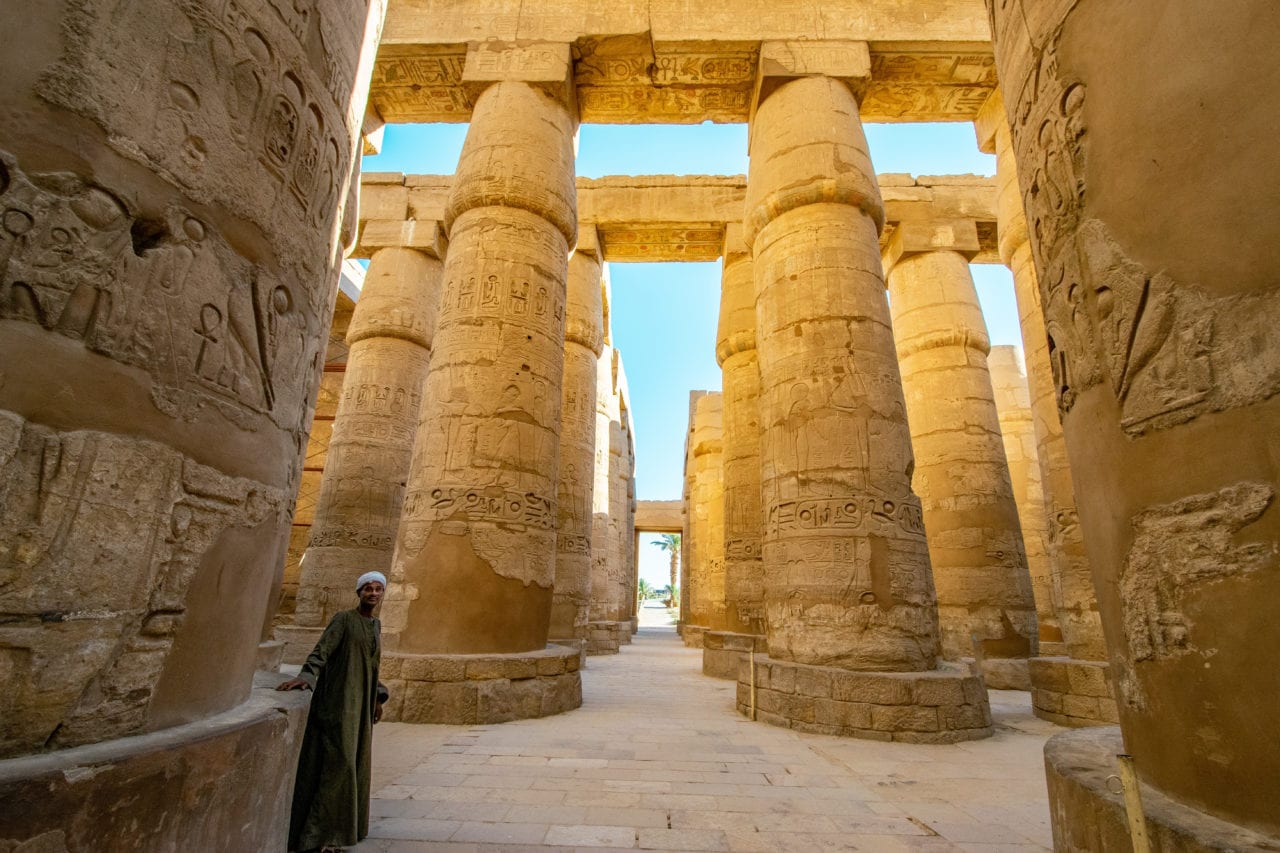 We’ll keep this section short because you have already made yourself significantly safer choosing a Nile Cruise, and we have already written a complete guide to keeping yourself safe traveling to Egypt. Some of the best reasons to take a Nile Egypt Cruise are safety and convenience. Your all-inclusive Nile cruise will include accommodations, food, and excursions. Staying safe outside of the boat primarily consists of staying with your group.

On the boat, there are still ways to stay safe. The two biggest tips are to lock your valuables in the room’s lockbox at all times and don’t drink the water. Even though the boats are clean and luxurious, the water isn’t up to standard, and you should use bottled water for everything, including brushing your teeth. It’s up to the individual and their stomach sensitivity to choose wisely at the buffet. Some food, for instance, raw fruit and vegetables, could cause issues.

Surf Safe from any location using SurfShark. Their VPN services establish a secure and encrypted connection providing greater privacy than even a secured Wi-Fi hotspot.

Exceptional Experiences on a Nile Cruise and Stay 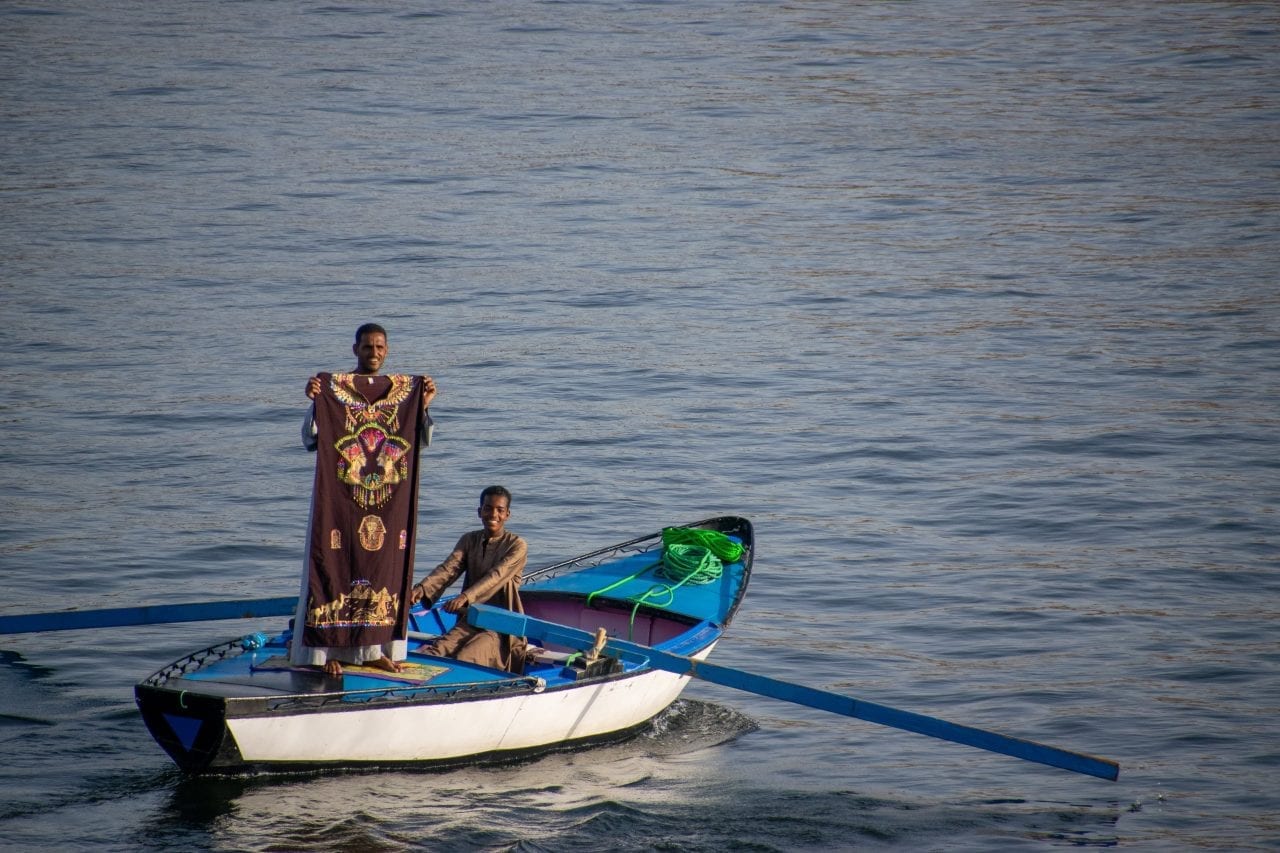 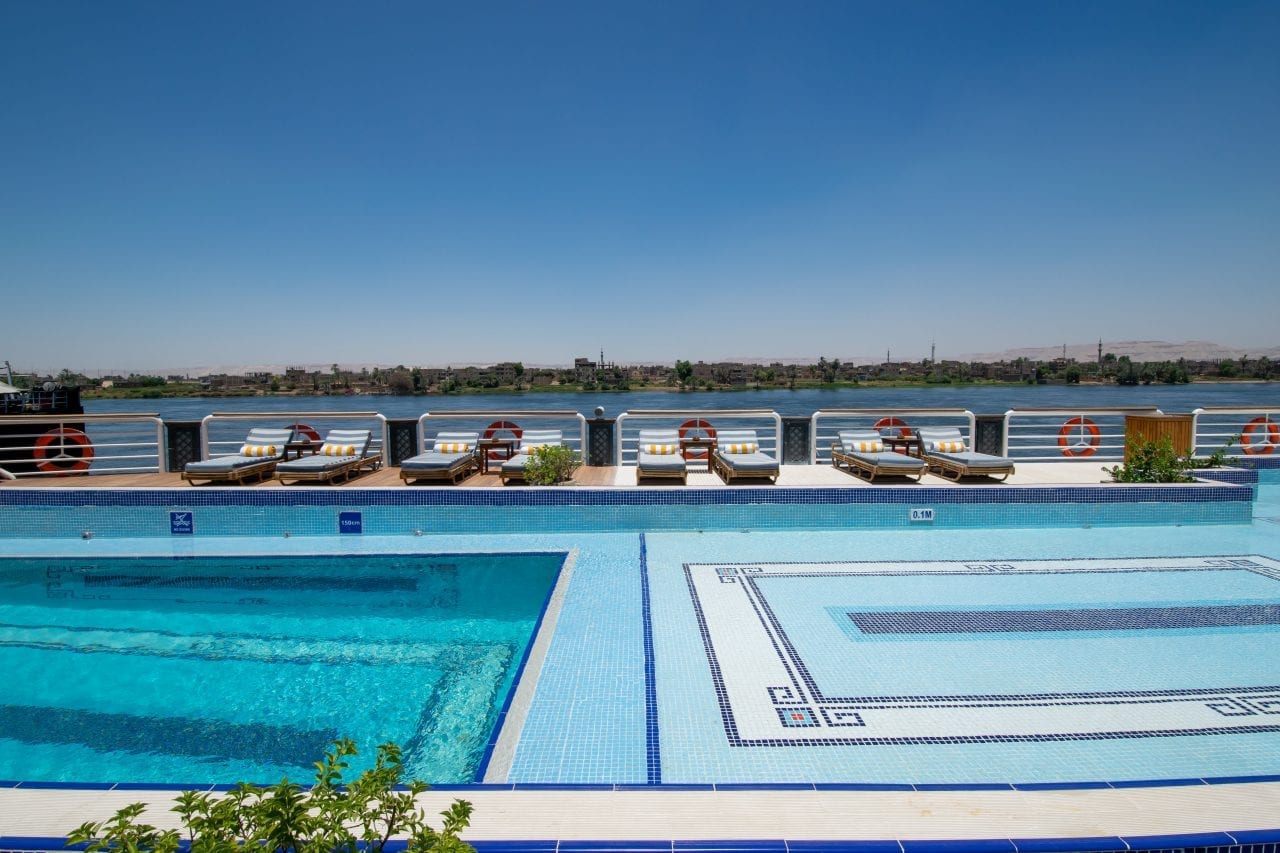 During the day, your floating palace sails peacefully along the Nile. An entire ‘Nile Cruise economy’ flourishes along the route. One of the most entertaining experiences I had with this ‘phenomenon’ occurred as we passed through the Esna Locks at Aswan. Merchants would run alongside the ship or approach in boats, throwing their wears up to passengers while negotiating prices. It was the most intense negotiations I witnessed in all of Egypt, and you could only experience it on a Nile cruise.

Every night on the boat was a combination of dinner and a show. Some were a bit cheesy, but they were all fun. One night they brought in a full whirling dervish production. Another night, we dressed in Egyptian clothes and shared a buffet of traditional Egyptian food. After dinner, we were free to leave the ship and explore the town. We ended up in a shisha bar smoking hookahs, which was a bit strange for a group of women travelers, but we never felt uncomfortable. 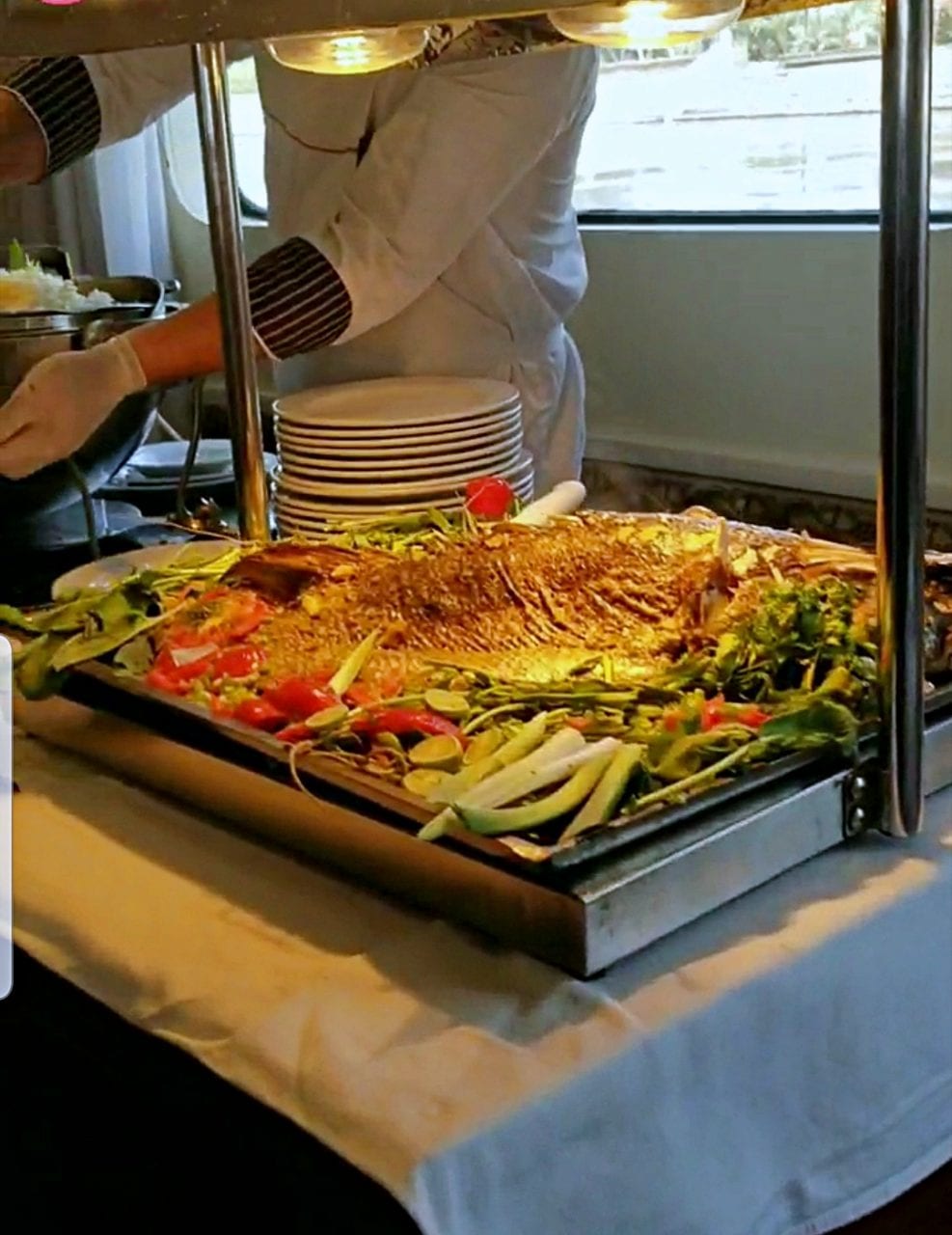 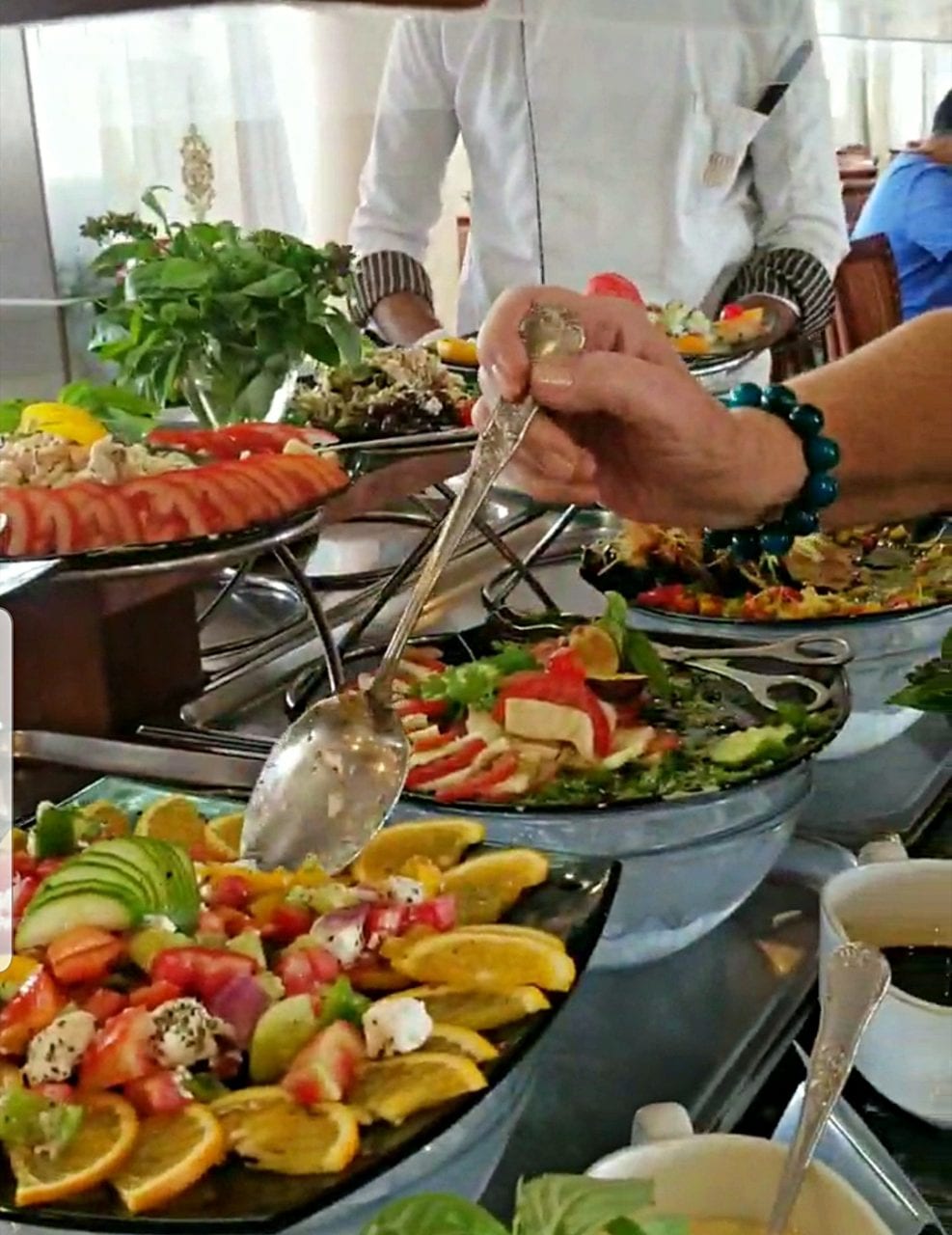 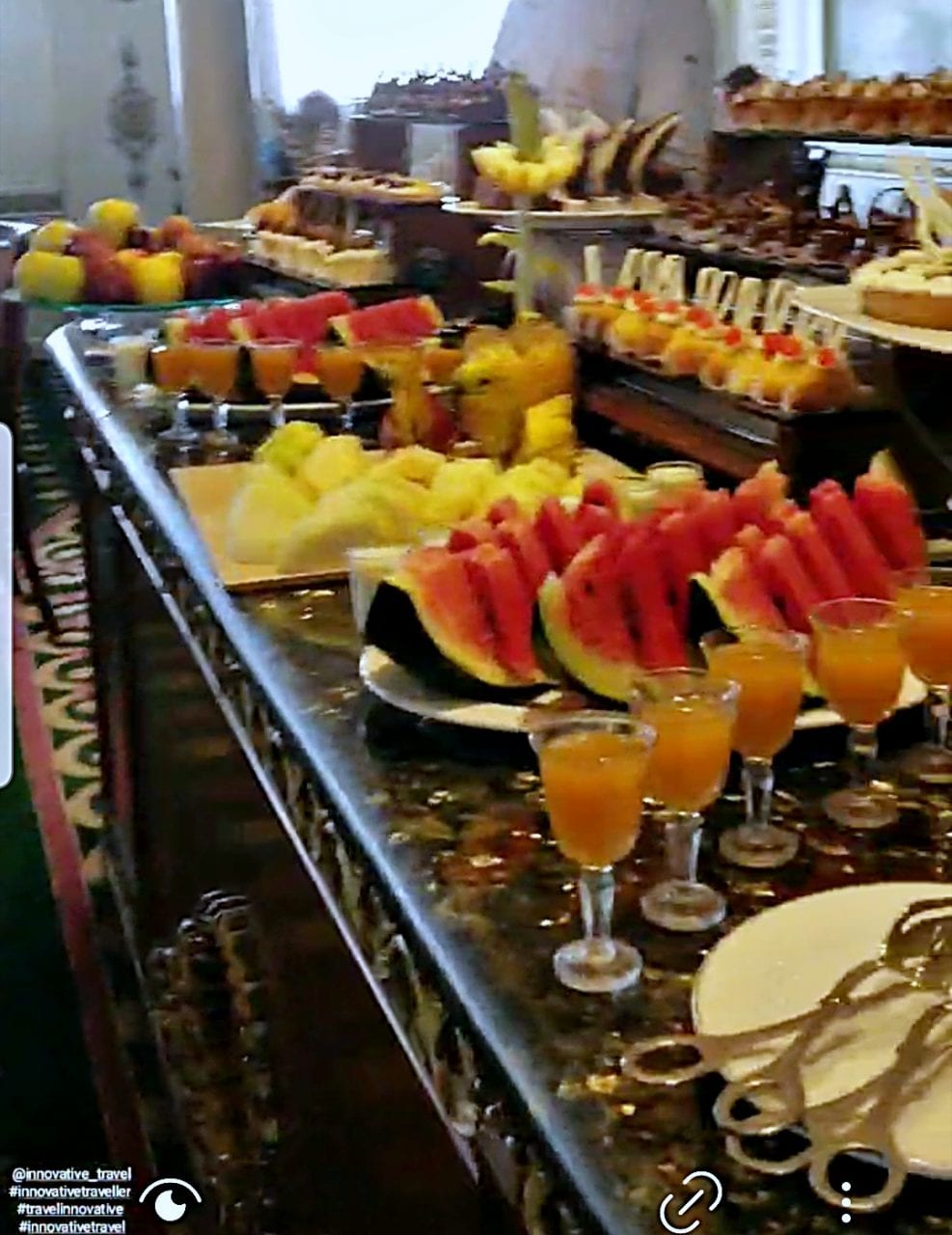 If video is not visable please refresh browser 🙂

You heard me use the term ‘floating palace,’ which is an apt description of the gilded luxury Nile Riverboats offer. My estate room was off the hook, with a gigantic bed and a luxury shower that doubled as a steam room and jacuzzi. I was feeling so pampered until I toured their suites! I could imagine sitting in the jetted tub and watching the banks of the Nile float by from the comfort of my bath.

The luxury amenities continued above deck too. The focal point of the top deck is a large pool filled with cool water. There were times I wished we were on a ship with a covered pool deck, but we were always comfortable in the water.

The meals completed the onboard experience. Breakfast and lunch consisted of an expansive buffet filled with delicious options. With all of the European guests, there was an extensive collection of breakfast meats well beyond the traditional American eggs. For dinner, we would order from an a la carte’ menu with a great selection as well.

My only complaint about the service on board would be the wi-fi. They only offered a limited amount of data with dreadful speeds. I had intermittent luck with a local sim card, but unless you are a travel writer, I would recommend planning on unplugging and enjoying the trip. 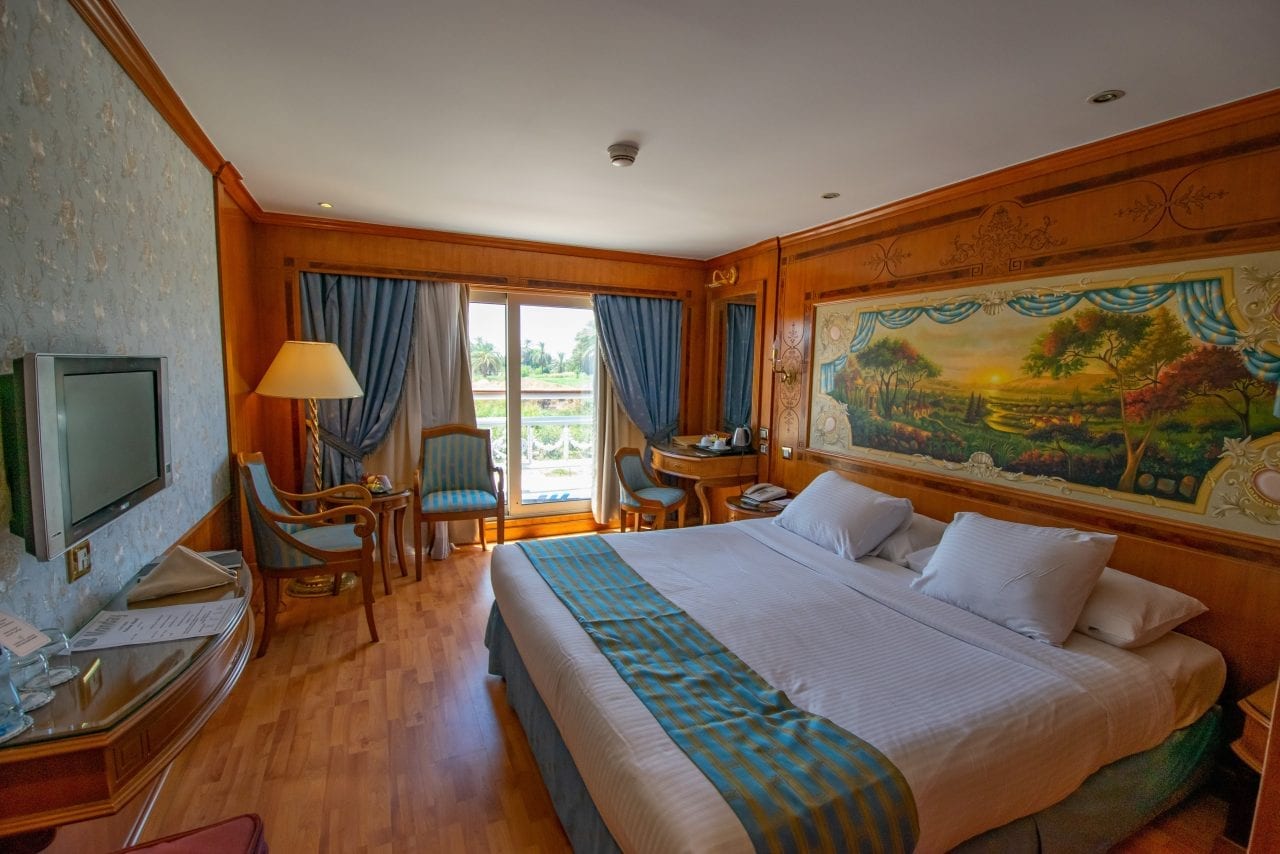 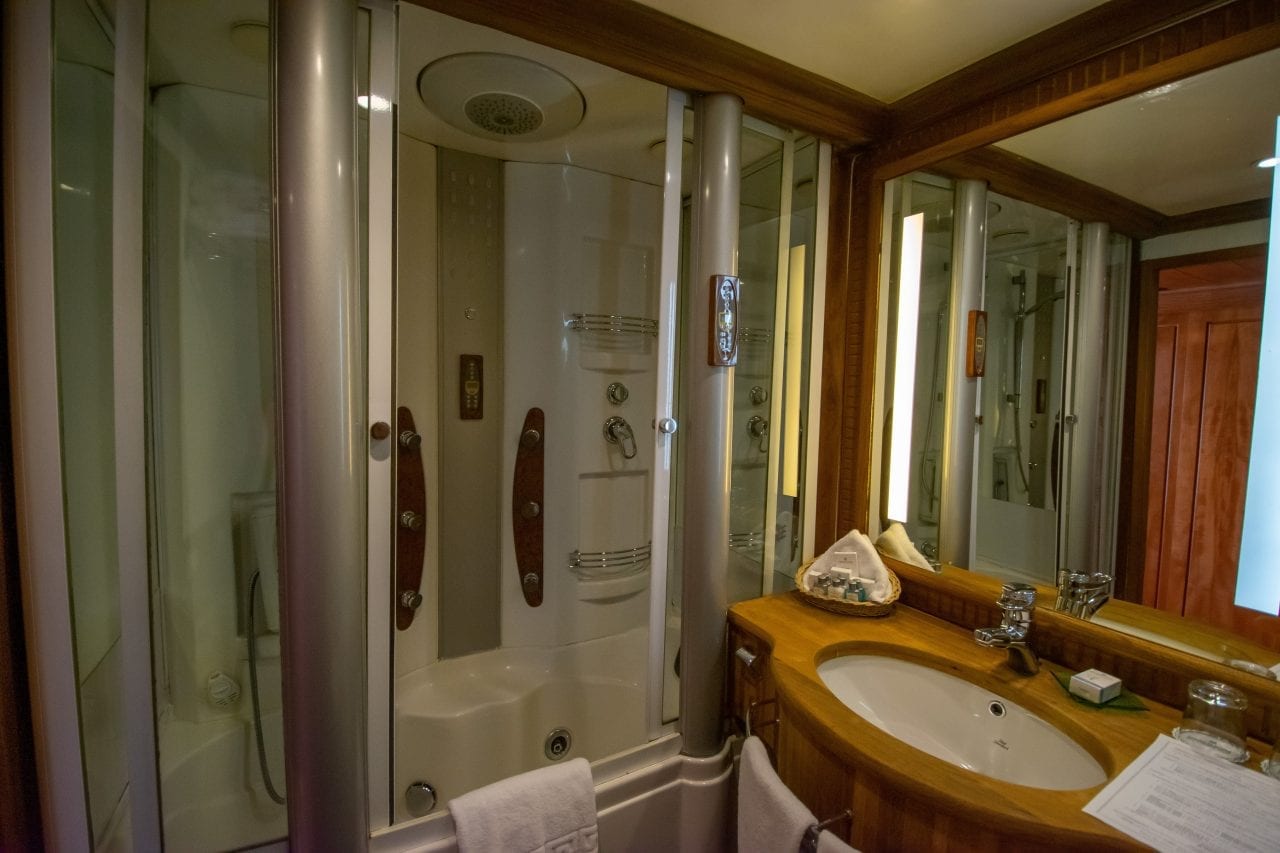 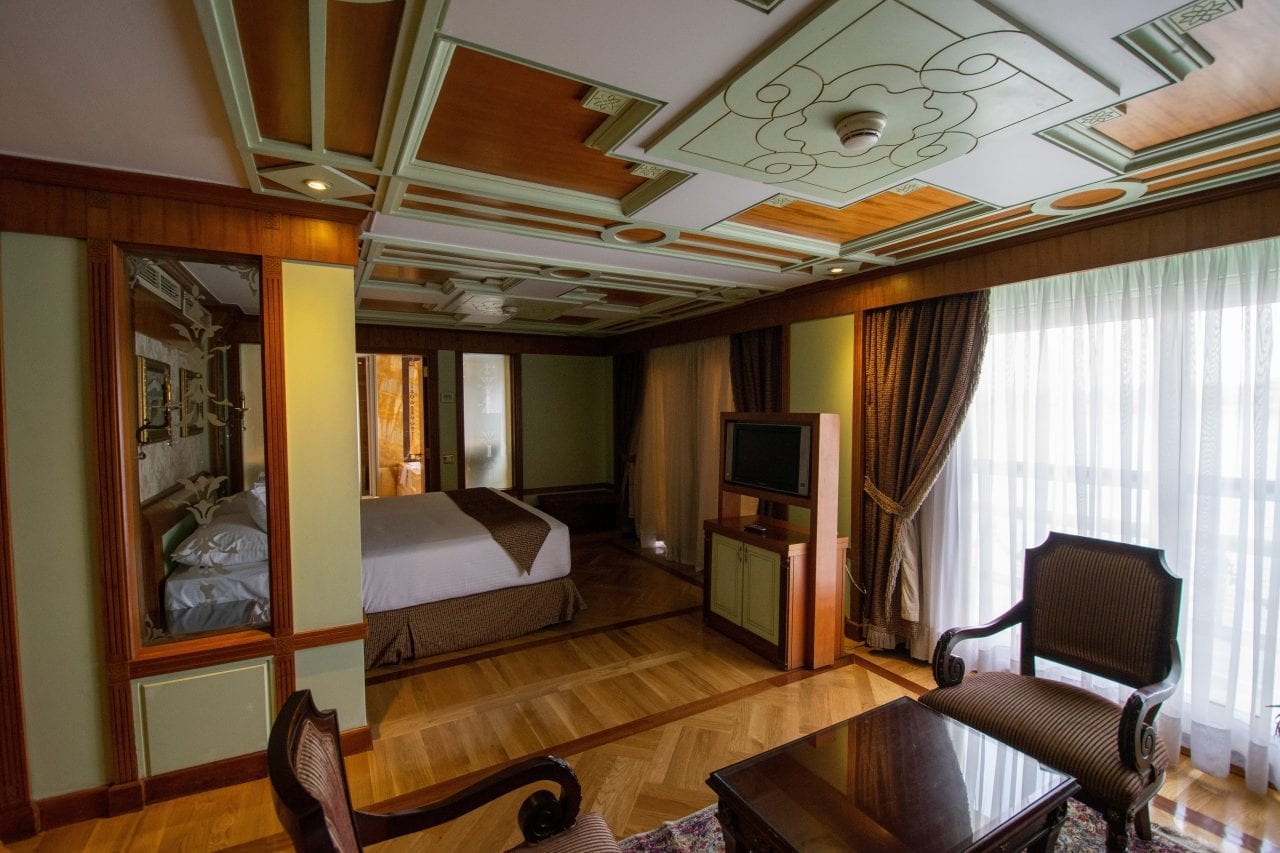 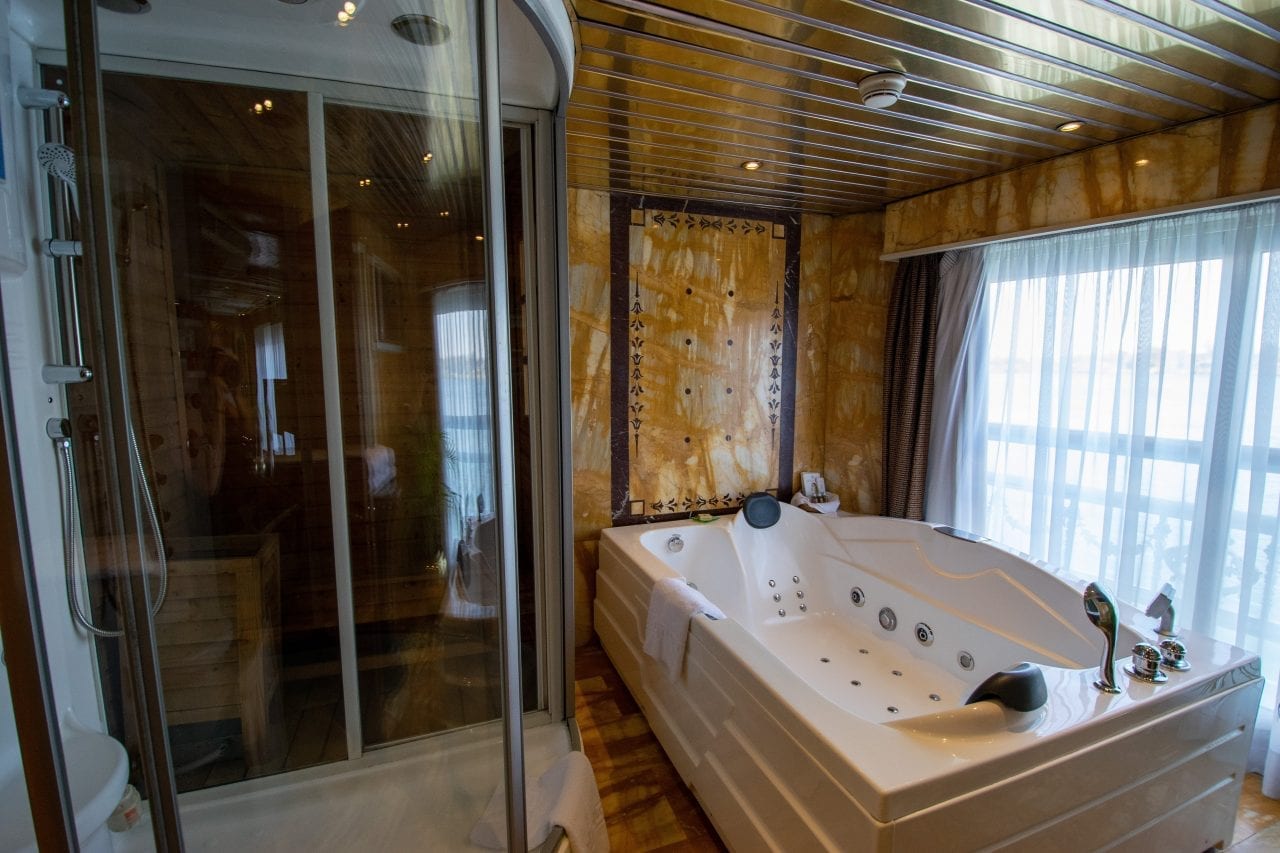 Egyptian Tours to Take in Addition to an Egypt River Cruise 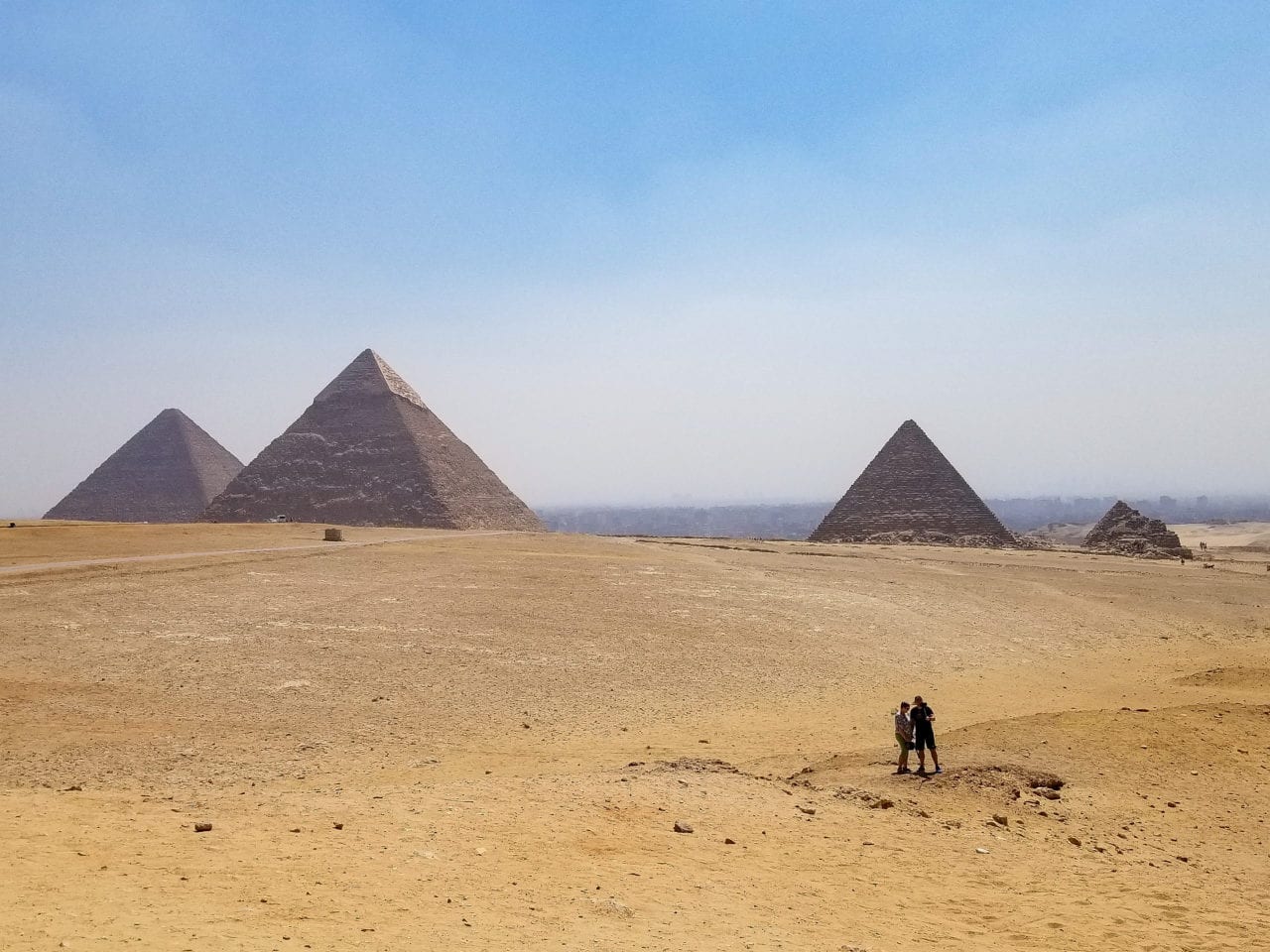 Our last tip for a luxury Nile River cruises is to take additional Egyptian Tours. River cruises might be necessary on an Egyptian holiday, but they certainly aren’t sufficient. You absolutely have to see the Great Pyramids in Giza (Cairo). People have been saying that for 3,000 years, and it’s still true. Egypt has also repatriated a lot of artifacts looted throughout the years and has world-class museums in Cairo. From Wikipedia, “Grand Egyptian Museum (GEM), also known as the Giza Museum, is a planned museum of artifacts of ancient Egypt. Described as the largest archaeological museum in the world, the museum is under construction and is scheduled to open in 2020, exhibiting the full Tutankhamun collection with many pieces to be displayed for the first time.” Not only that, the hustle and bustle of a city larger than New York, Los Angeles, and Chicago combined has to be experienced.

Outside of Cairo, I would recommend taking the Aswan to Abu Simbel tour. Of all the temples in Egypt, Abu Simbel impressed me the most. If you have time, stopping by Alexandria to take in the sights or go diving at Sharm El-Sheikh’s magnificent array of gorgeous dive sites. One of the best ways to optimize your time and experience in Egypt is to book a tour with a reputable and knowledgeable tour company. I went with Innovative Travel, who have been organizing Egyptian Tours for over 30 years. They put together a fantastic boutique travel itinerary that included a Nile River Cruise from Luxor to Aswan. 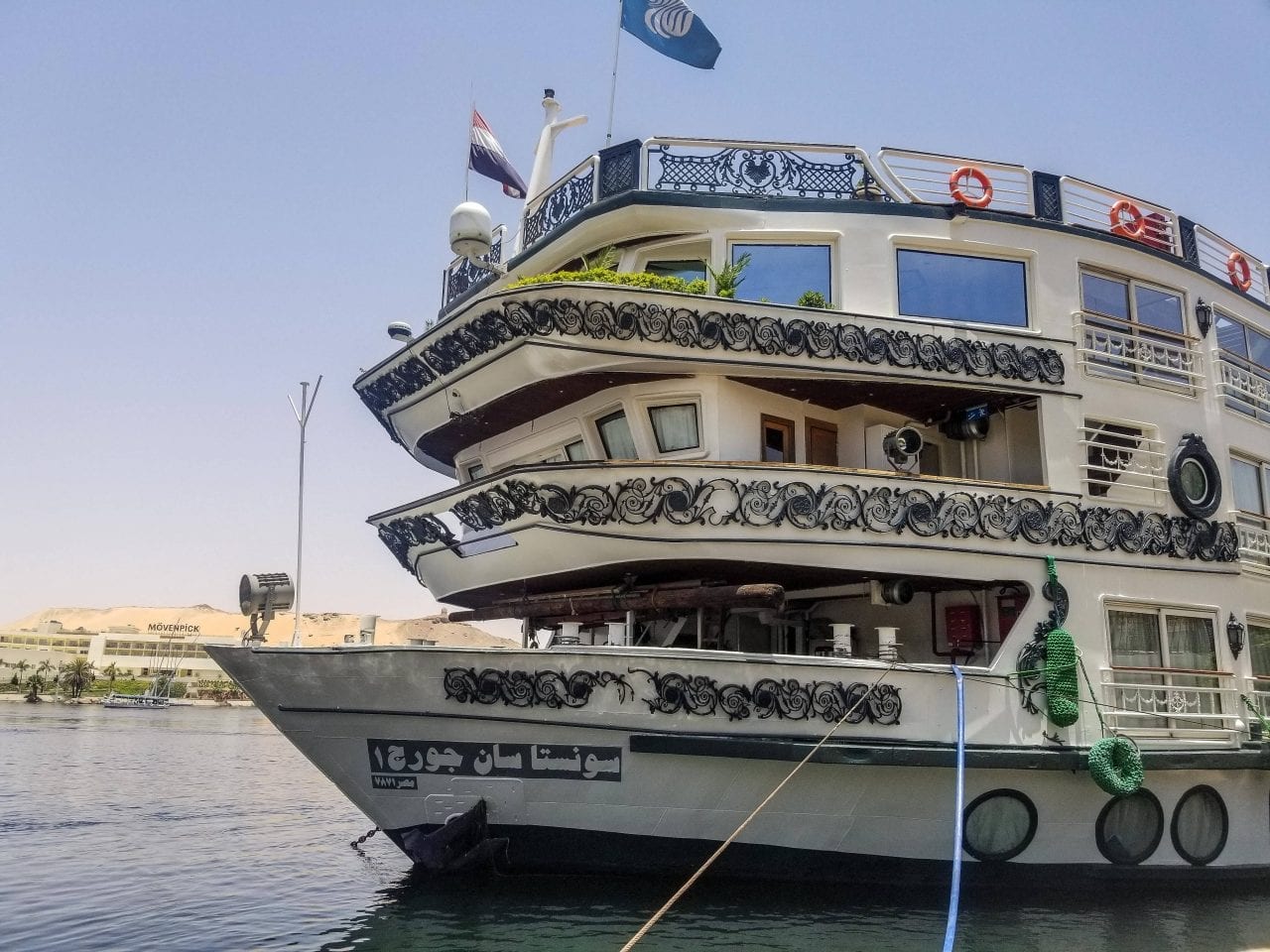 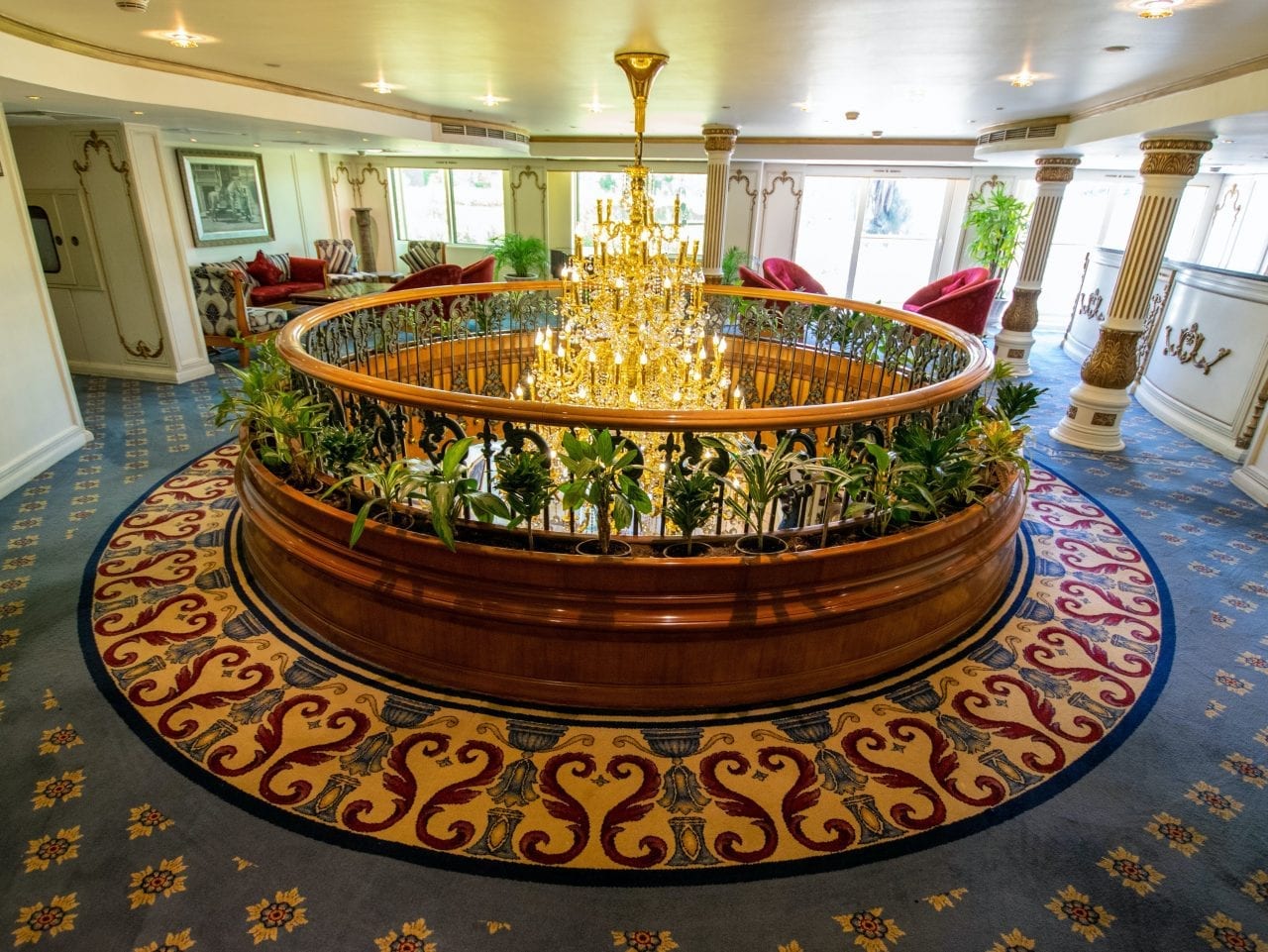 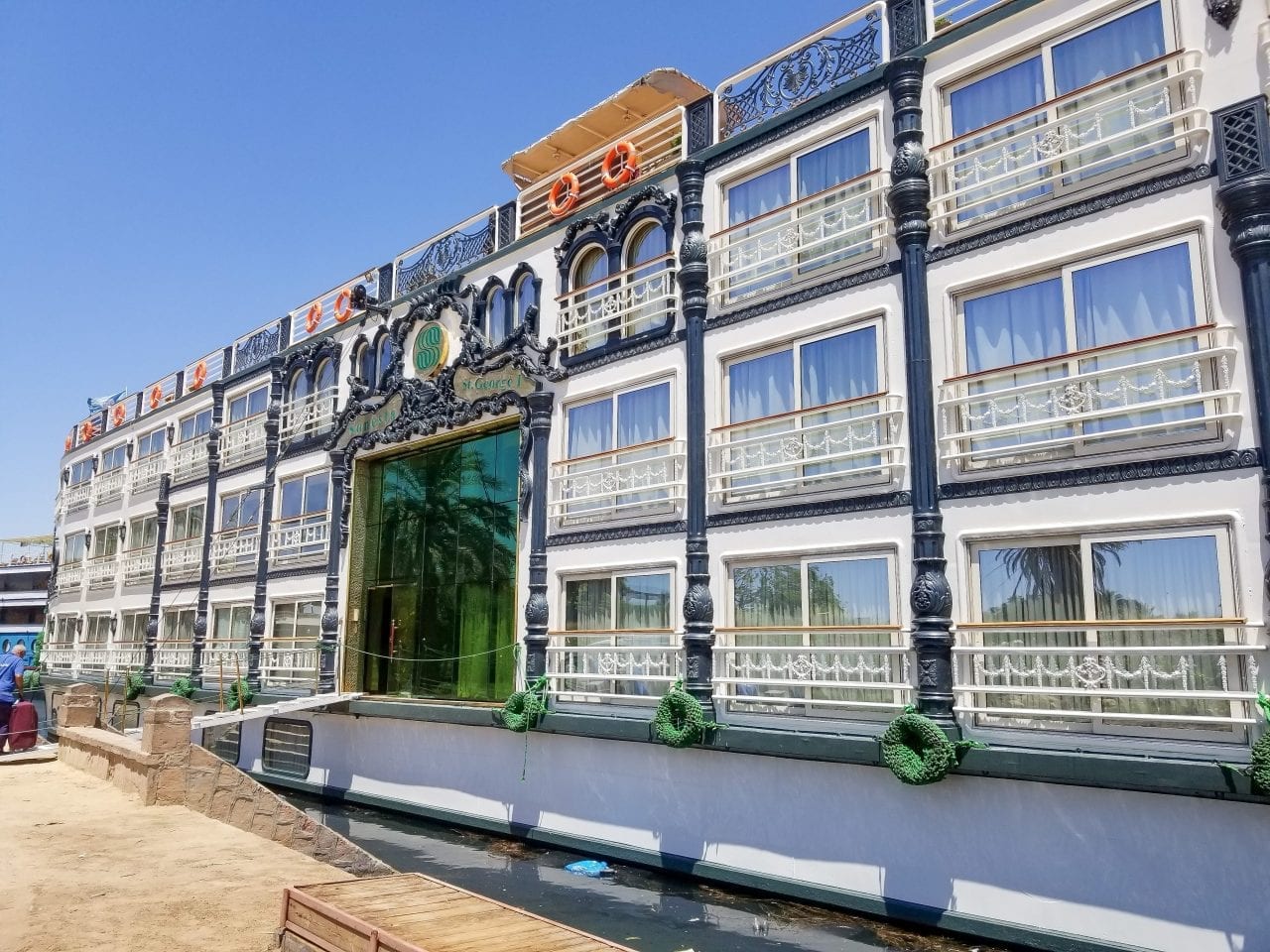 Disclosure: A big thank you to the Innovative Travel for hosting me and setting up a fantastic itinerary and tour! For more travel inspiration check out their Facebook and Instagram accounts. 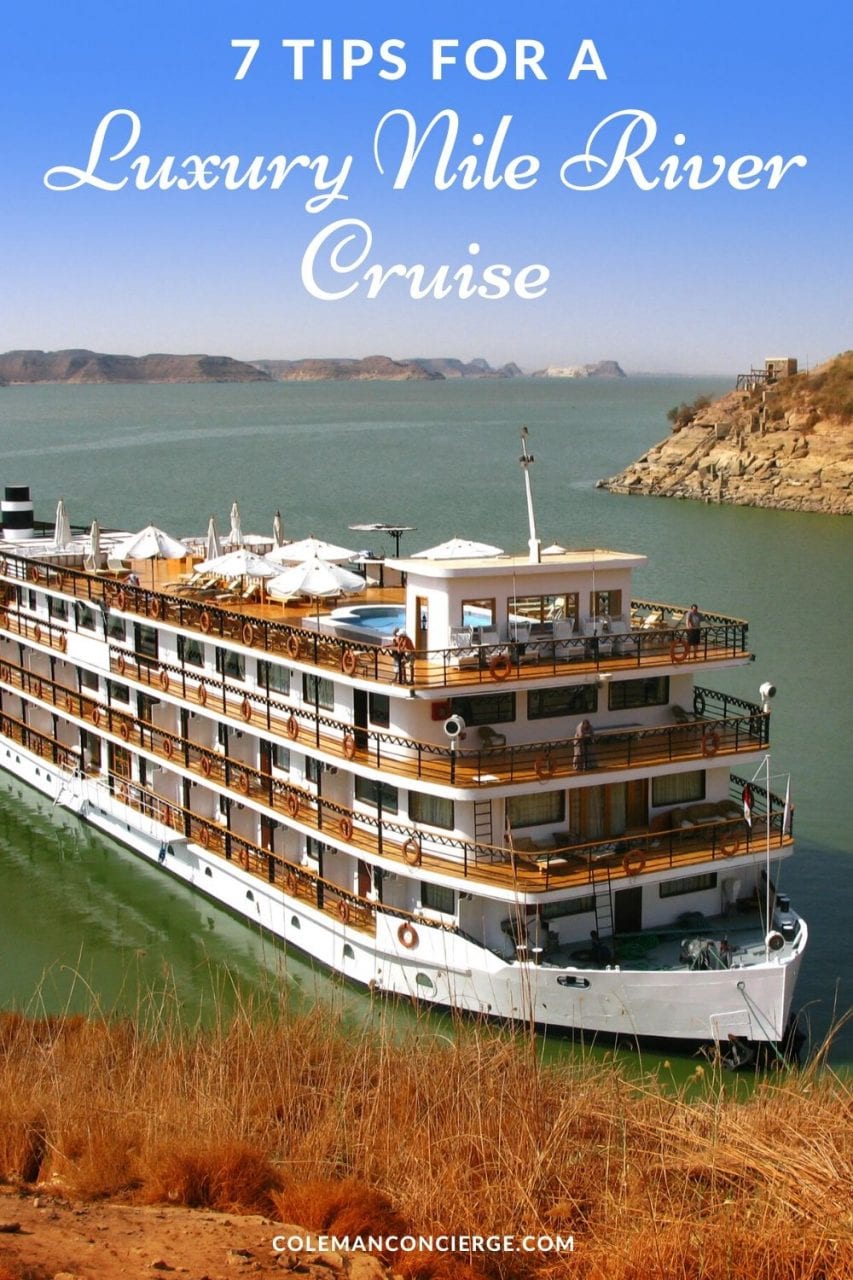 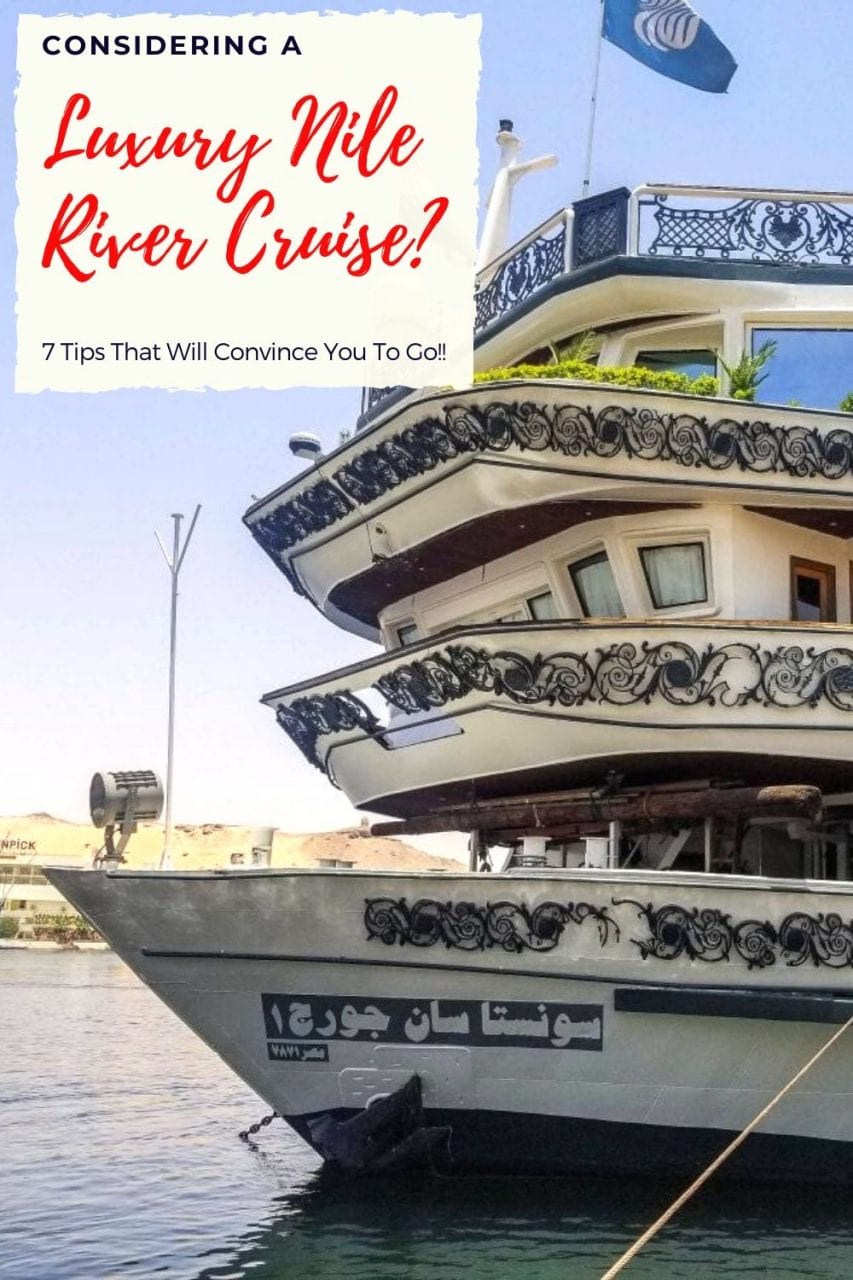 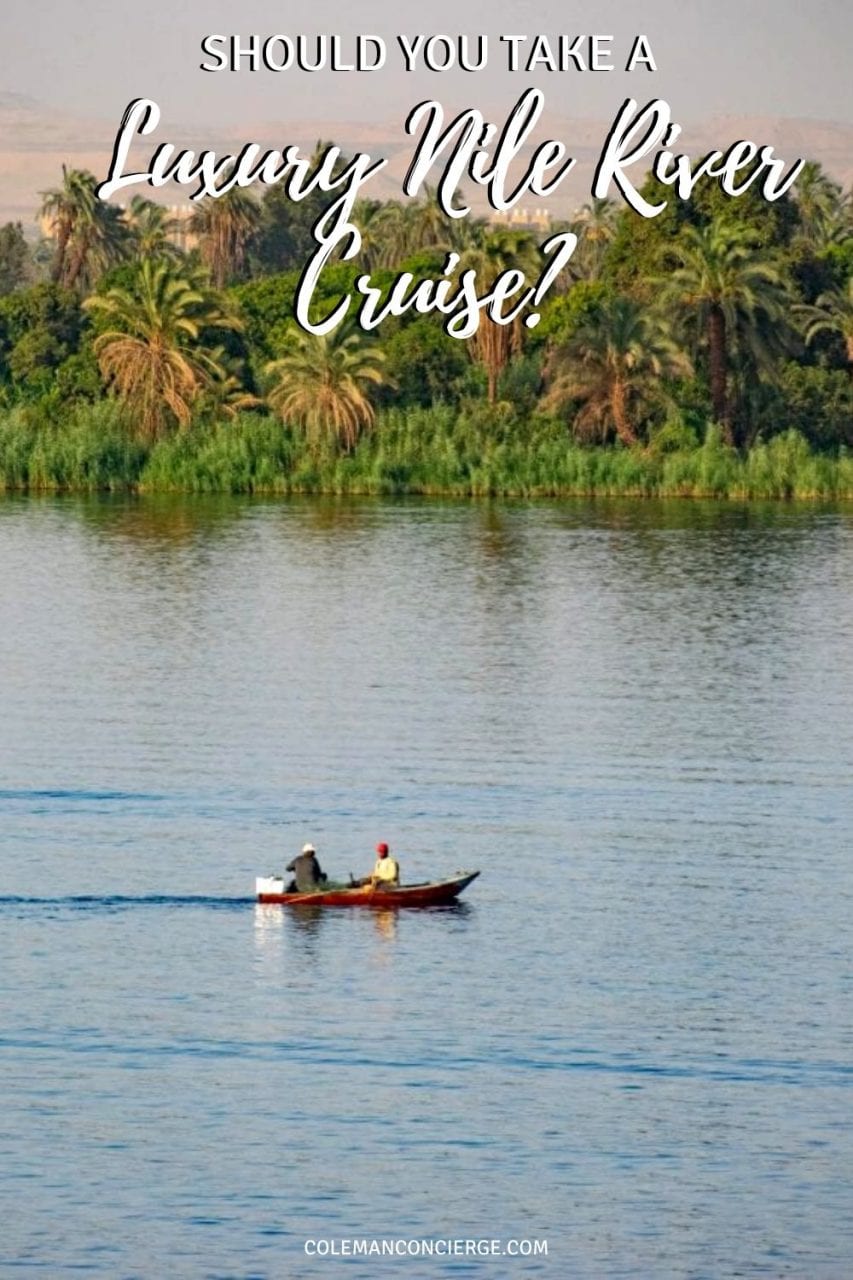 Join the Concierge Club for behind the scenes content, our latest posts, and more…