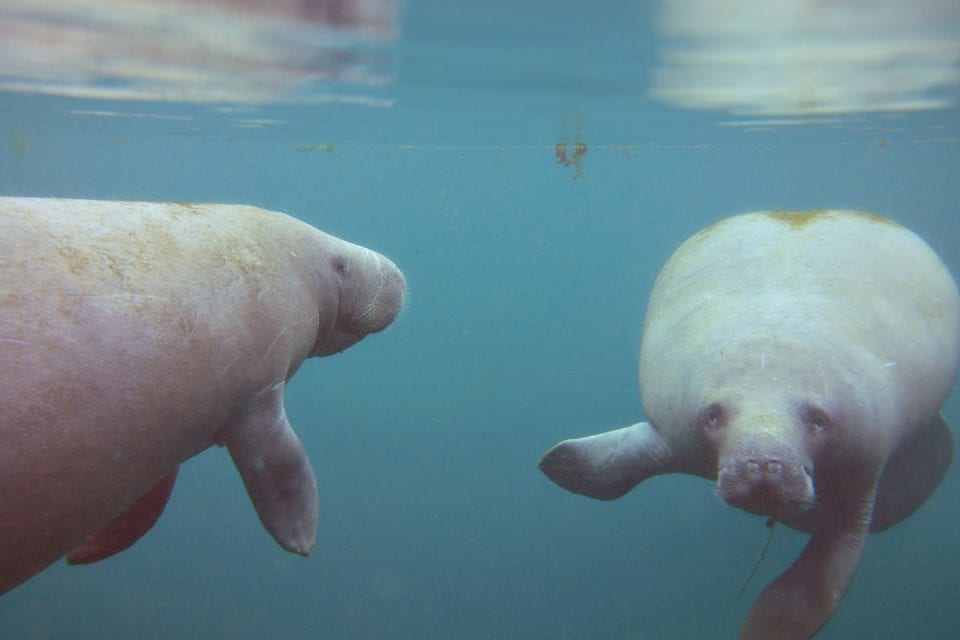 Imagine kayaking Silver Springs with manatees swimming in crystal clear water and monkeys swinging through the trees beside you. If this sounds like a movie, you might be onto something. Silver Springs State Park in Florida is one of the largest artisan springs ever discovered and the only place in America you can see manatees and wild monkeys on the same trip. It is also the filming location for the black and white Tarzan movies, Creature From the Black Lagoon and a host of other films and TV shows. There is no other paddling experience quite like Silver Springs. 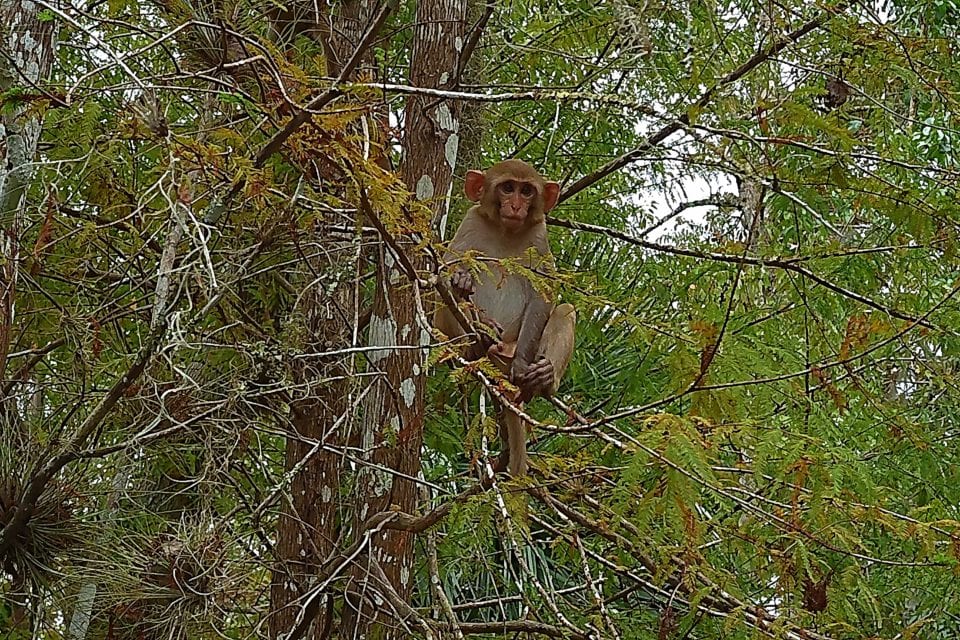 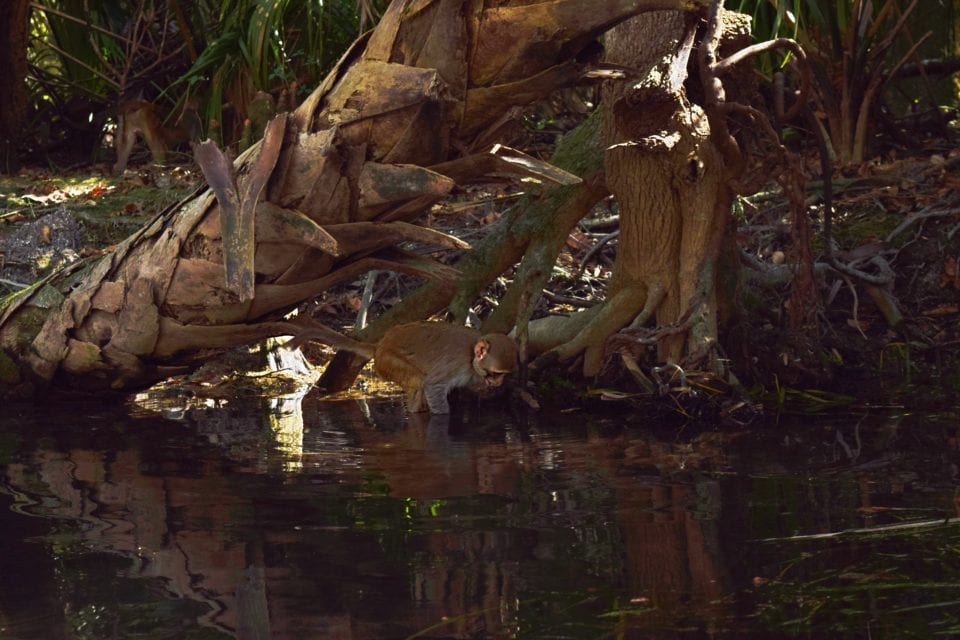 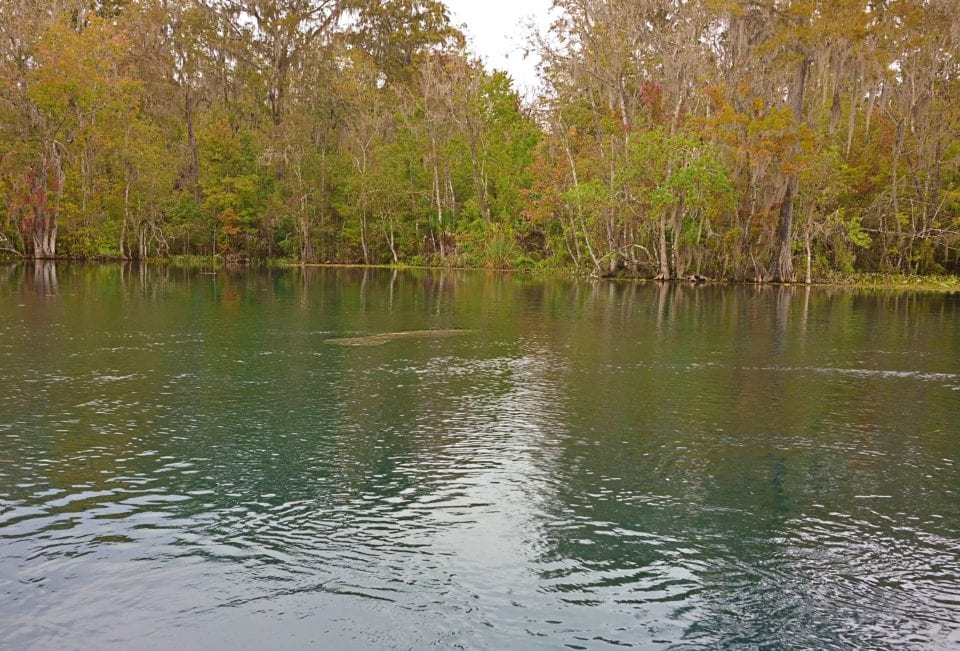 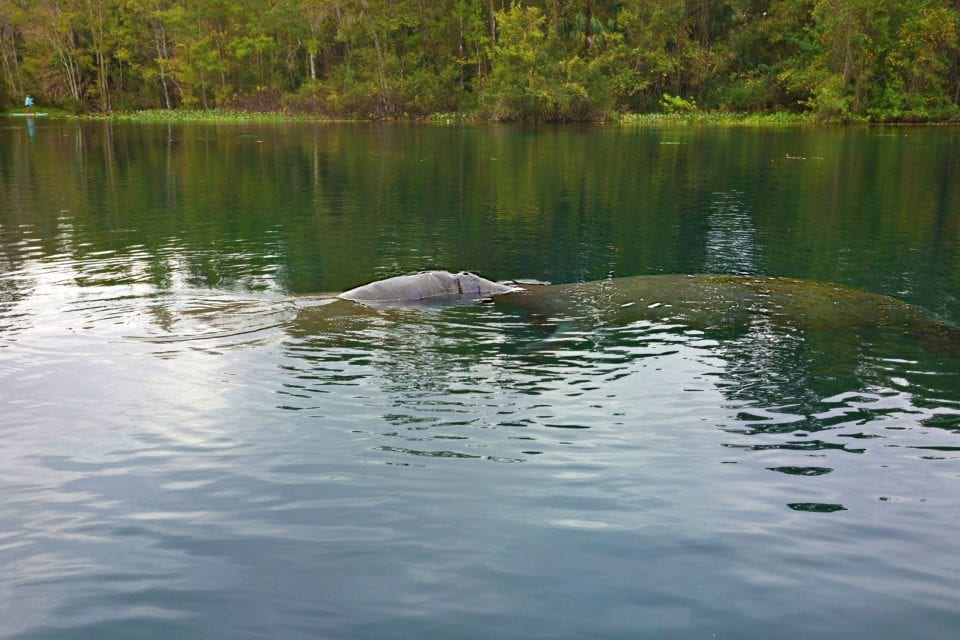 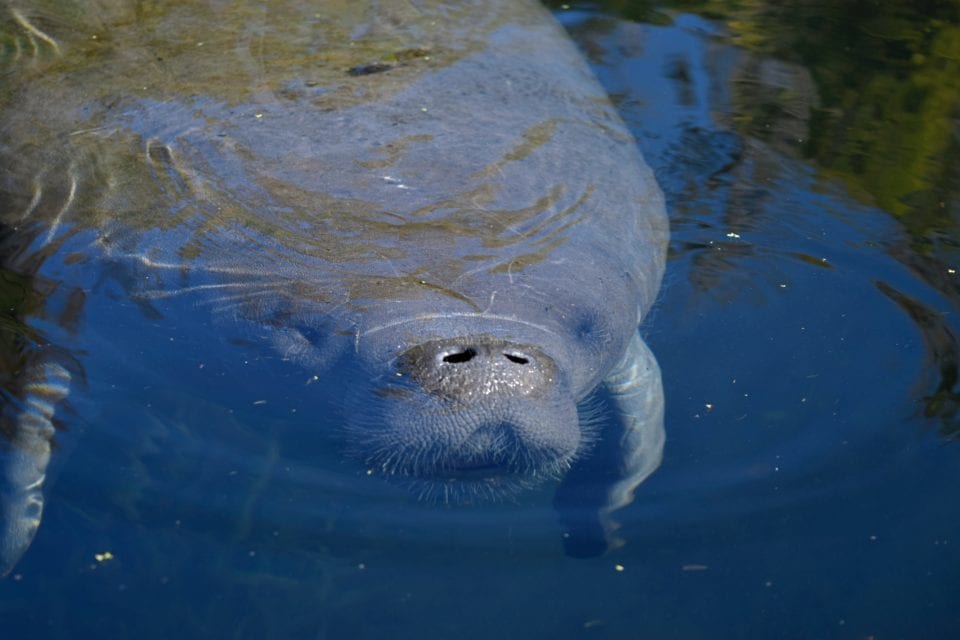 Manatee Encounters From your Kayak

The park’s spring run extends for about a mile beyond the springhead in the state park. The water is so clear that you can see all the way to the bottom. It’s a great place to observe all kinds of unique fish like the prehistoric Florida Gar or mullets jumping out of the water. It’s also the best place to see manatees in Silver Springs. In the cool winter months, the manatees will tend to congregate in the 72-degree spring water. During warmer months, they will spread out down the length of the river. However, the viewing is better in the spring run where the water is clearer.

Keep your eyes open for manatees surfacing every four minutes or so to breathe. Look for the swirls when the animal dives or its back, tail, or head as it surfaces, and listen for its deep exhale. Another great strategy is teaming up with other paddlers heading down the river to share manatee sightings.

Do you want to learn more manatees and how to swim with manatees in near by Crystal River? Check out our article Swimming with Manatees in Florida – Everything You Need to Know. 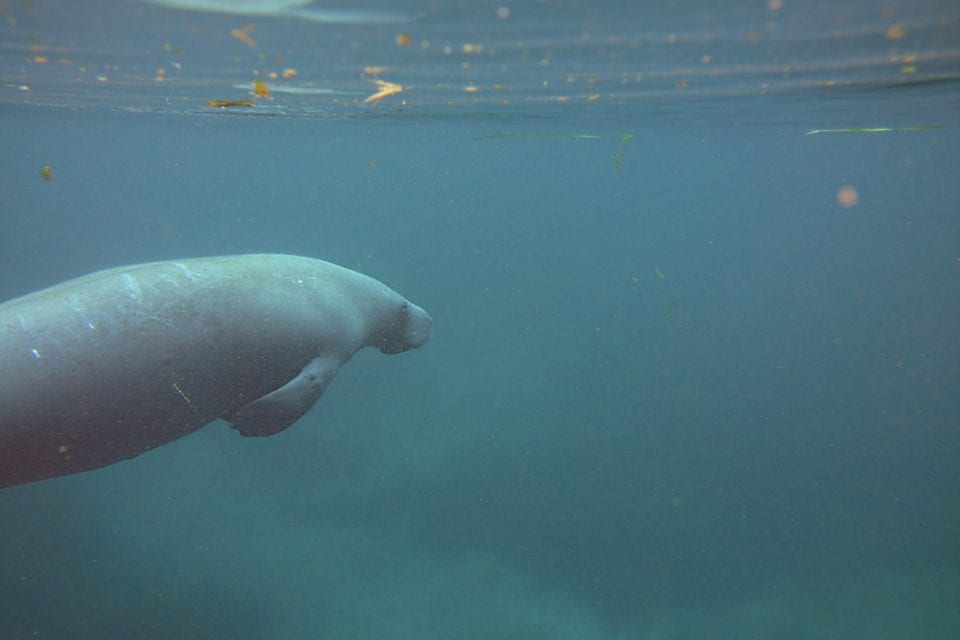 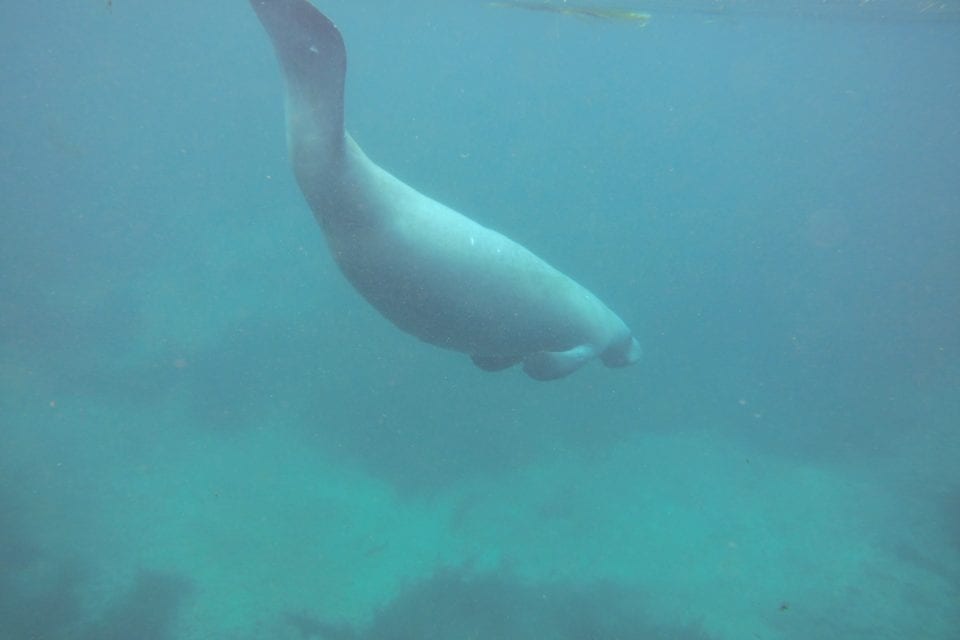 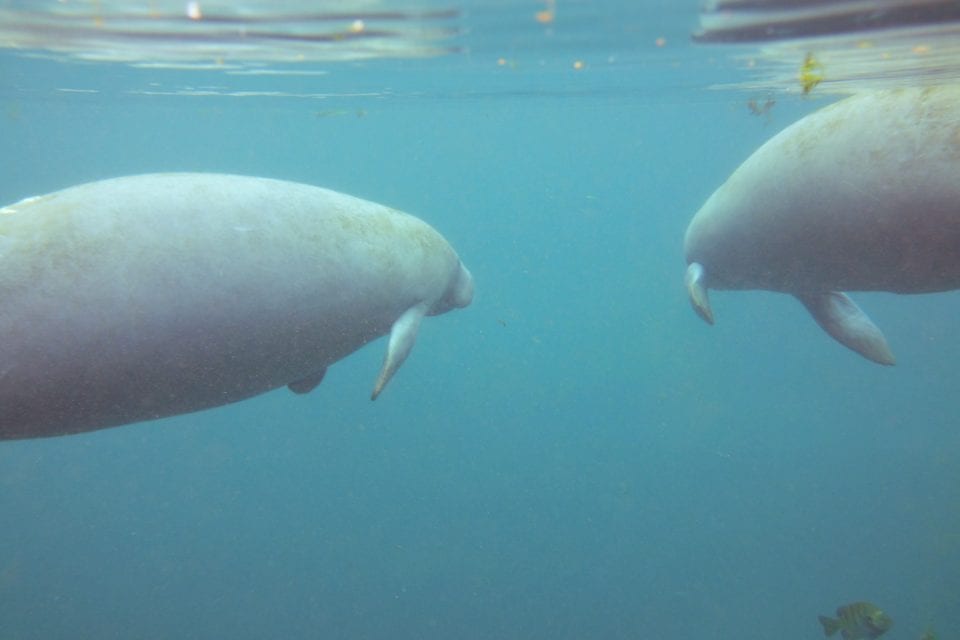 Manatees are protected by the Marine Mammal Protection Act of 1972, the Endangered Species Act of 1973 and the Florida Manatee Sanctuary Act of 1978. It is illegal to feed, harass, harm, pursue, hunt, shoot, wound, kill, annoy or molest manatees. Anyone who participates with paddle-sports must abide by the laws that protect manatees. Florida Fish and Wildlife offers the following guidelines for paddling with manatees: 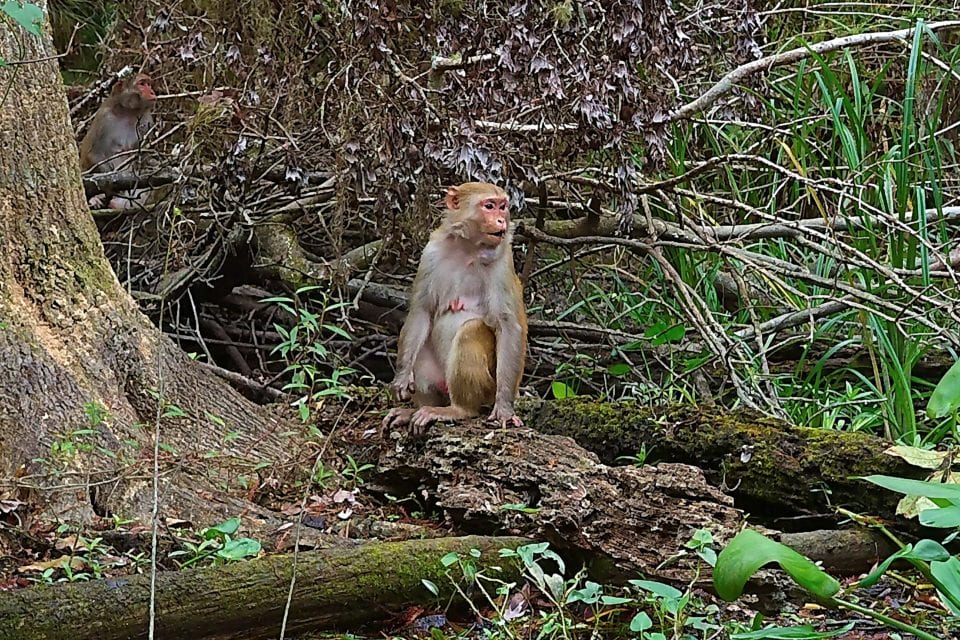 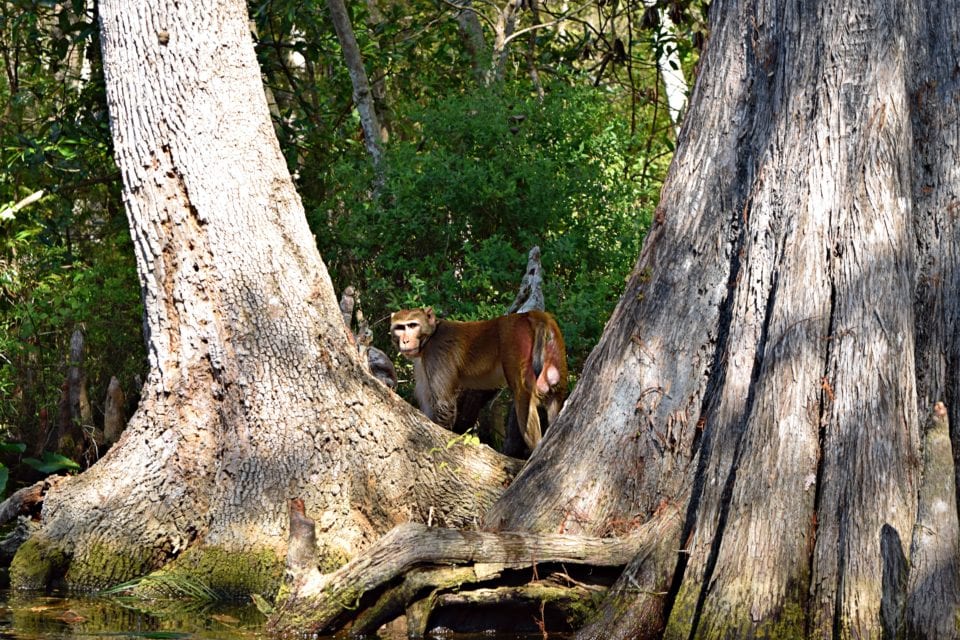 The original colony was just six monkeys with six more that being added around the mid-40’s. About 200 of these primates now roam the Silver Springs area. If you look carefully, you’ll observe the genetic traits of a shallow gene pool in these monkeys like their crooked tails. We found the monkeys most abundant in the swampy areas below the spring run.

Monkeys make for exciting wildlife viewing but keep your distance. They are wild animals with notoriously bad dispositions. Studies show that they carry diseases, like herpes B, that can transmit to humans. As of December 5, 2017, it’s now illegal to feed wild monkeys. Dr. Thomas Eason, Assistant Executive Director of the Florida Wildlife Commission, says “The health and safety of the public is the Commission’s number one priority. Feeding wild monkeys creates an elevated risk to human health because it brings them into closer contact with people…” Like any wild animal, these monkeys need to be treated with respect, but, with common sense and good manners, it is possible to have a delightful encounter. 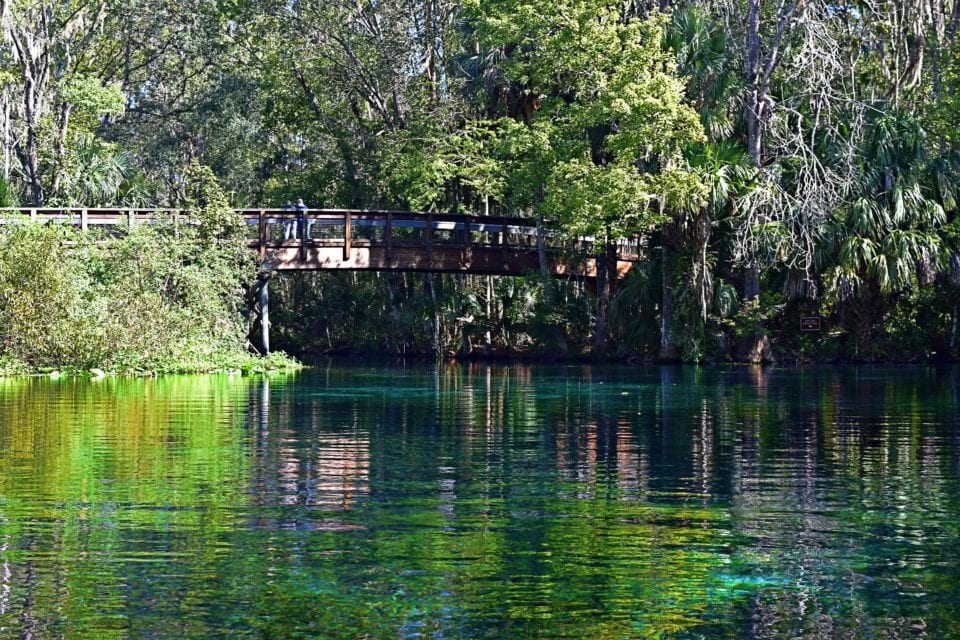 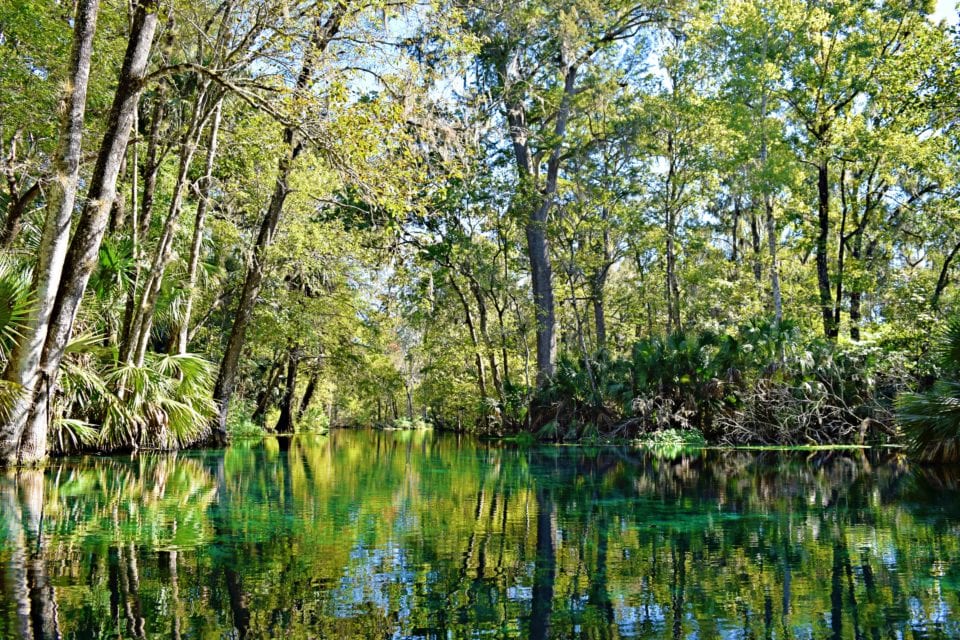 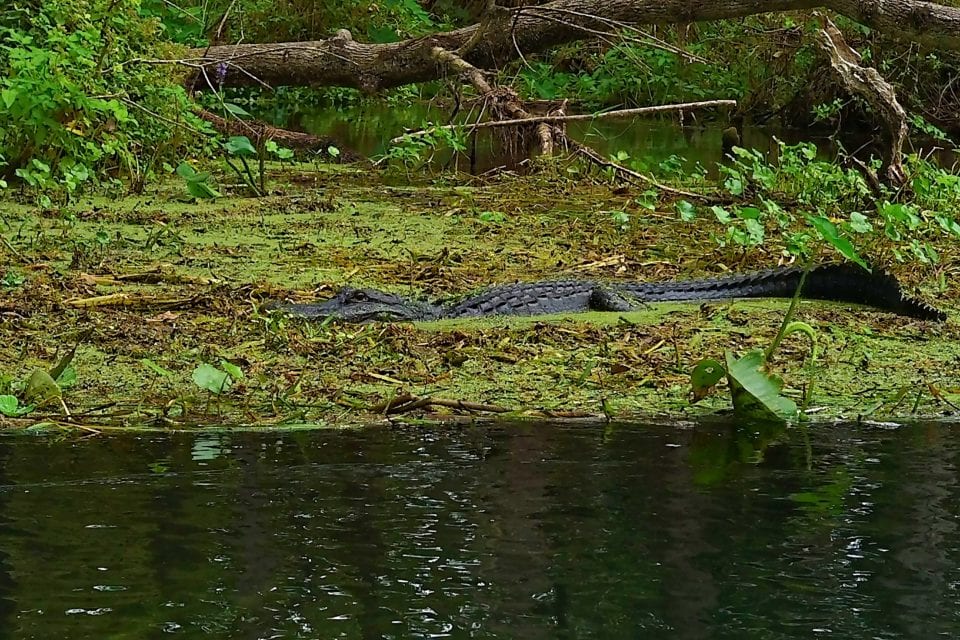 Our Experiences With Silver Springs Kayaking

Silver River State Park has just about the perfect kayak launch. You can unload your boat about 100′ from the ramp, which has a coated surface that allows you to slide into the water but is never too slippery. In no time, you’re on the water. The first 1/4 mile to the spring pool has little current so you can work on paddling and coordination. The only difficult part is deciding if you should take the Fort King Trail or the spring run. Let me make this easy for you – take the spring run which is just past the footbridge.

Silver Springs is a first magnitude spring that discharges over 550 million gallons of water a day. Because of the beautiful spring pool, It has been used as a backdrop for numerous Hollywood movies. The clear water gives you incredible views of the manatees and fish living in the spring run, and there are even a few sunken treasures along the way.

A collection of statues from the I Spy show can be found in the head pool. Just downstream sits the remains of a 400-year-old dugout canoe. Further downriver is a Spanish rowboat and wreck from Jerry Lewis’ movie ‘Don’t Give Up The Ship.’ It’s like a kayaking easter egg hunt. (check our map for details and remember that you can keep this map loaded on your phone and navigate from your phone.) No wonder the park runs a glass bottom boat tour down the spring run.

If you want to explore the Fort King Trail, you can easily paddle upstream from the confluence .7 miles past the spring. Since the river run is 5.5 miles, you could paddle up the still water of the Fort King Trail, checking out the funky remains of Fort King as you pass, and do the spring run twice. This will bump your trip up to 7 miles…. a perfect homage for an Eminem paddle (Monkey and Manatee). If you don’t like corny wordplay or excessive paddling, you can just poke your kayak in to satisfy your curiosity and then continue on downriver. 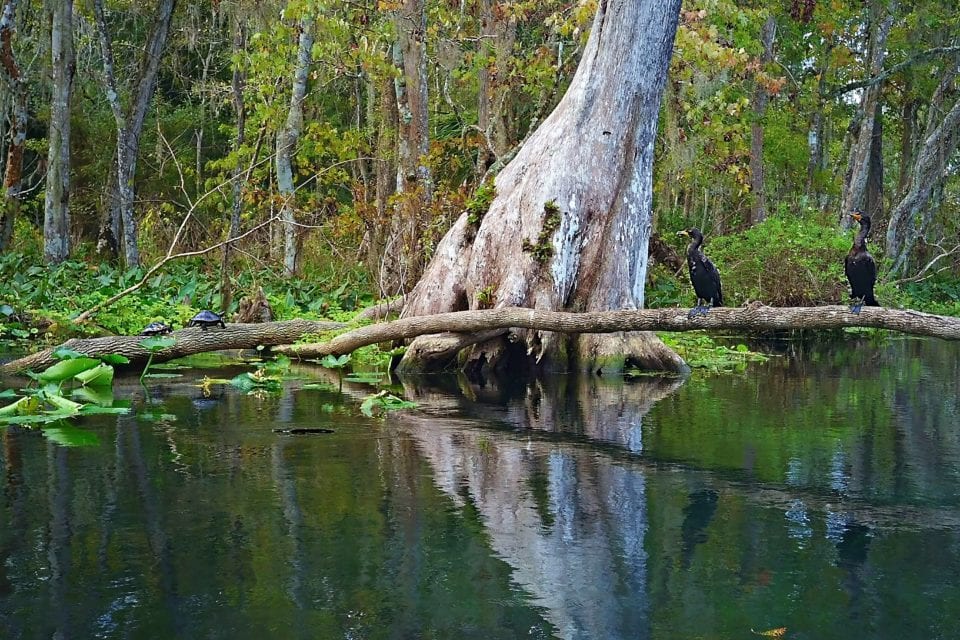 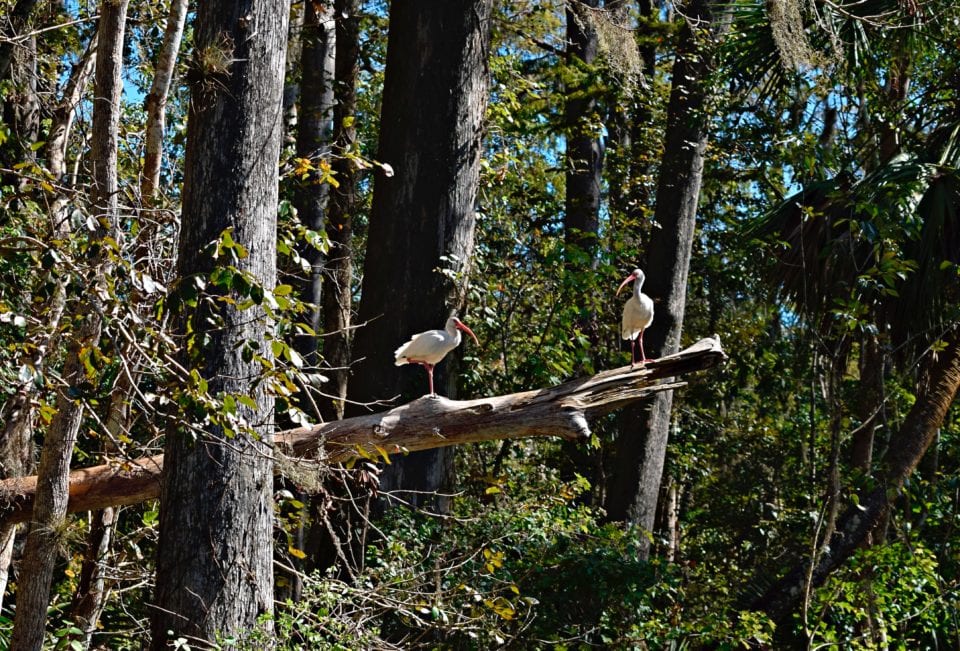 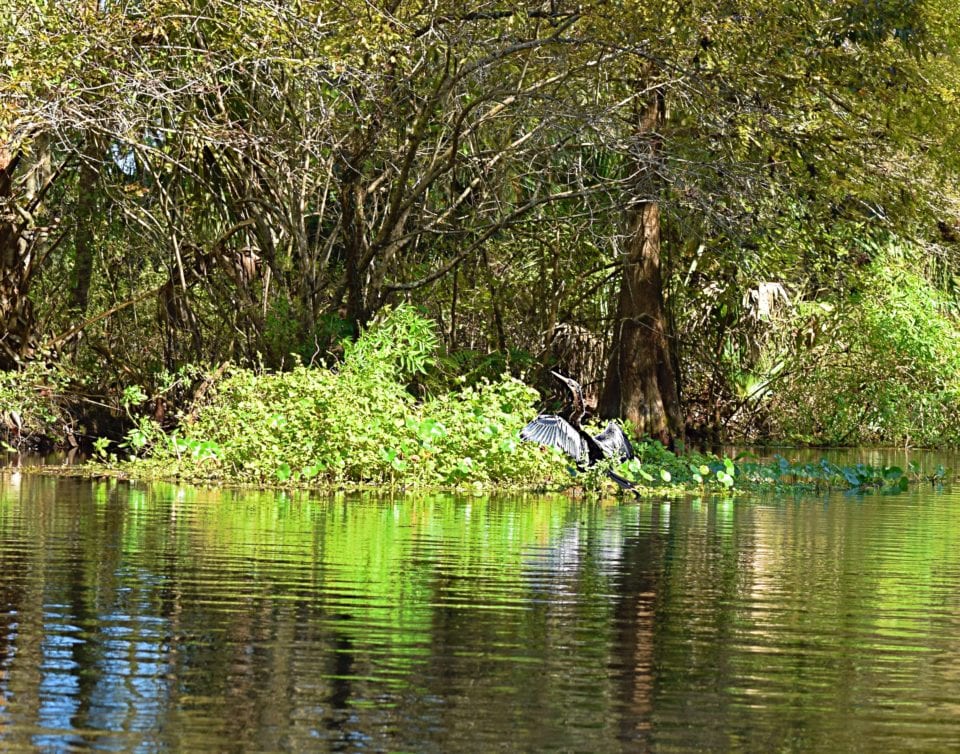 Kayaking Past the Spring Run

The river changes after the Fort King Trail junction. The tannin from the surrounding swamps clouds the water. Keep your eyes peeled for monkeys from this point on. You might see monkeys swinging through trees, turtles sunning on logs, birds basking on branches or just a gator staring at you from the murky water. The drastic change between the clear springs and nutrient-rich blackwater makes this like two trips in one.

For the next couple of hours, you’ll be in an animal world floating past beautiful cypress trees loaded with Spanish moss. This trip took us about four hours to run the 5.5 miles downriver. That means, on the average, we are going slower than just floating with the 2 mph current. There’s also a good pullout the boat ramp at mile 2.0 to stretch your legs and hit the port-a-potty.

You’ll notice an increase in motorboat traffic as you get near the pullout at Ray Wayside Park. Usually, I like to avoid motorboat traffic, but it isn’t a problem here. The entire Silver River is a no wake zone which protects the manatees and the kayakers alike. There is a very obvious left turn to reach the pullout so don’t be afraid you’re going to miss it.

Silver Springs kayaking is an easy trip with a feast of eye candy along the way. The only thing keeping this trip from being the perfect river run is that swimming is prohibited in the clear water. The beautiful springs and amazing animals will make you want to visit again and again. 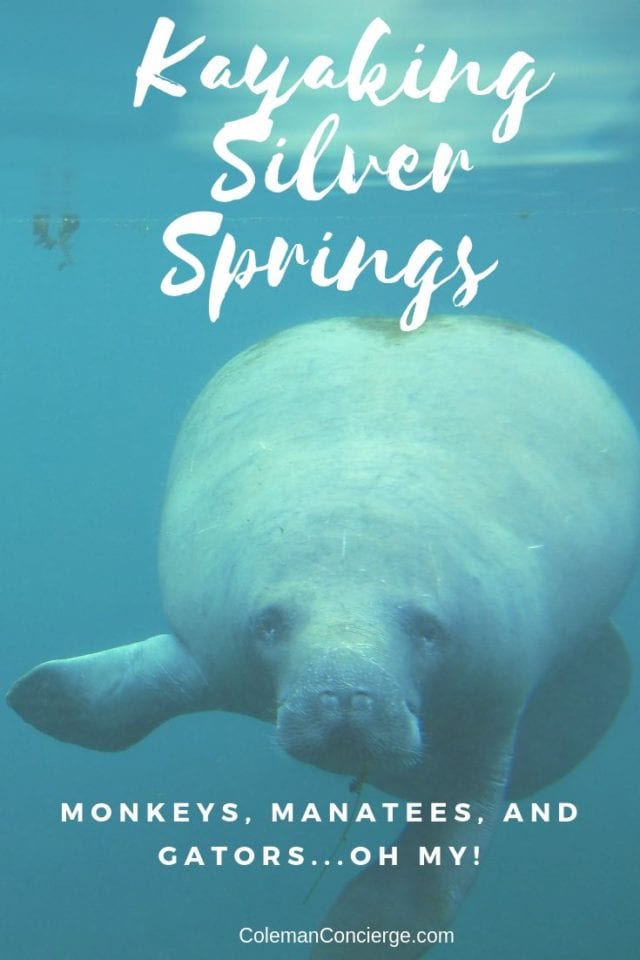 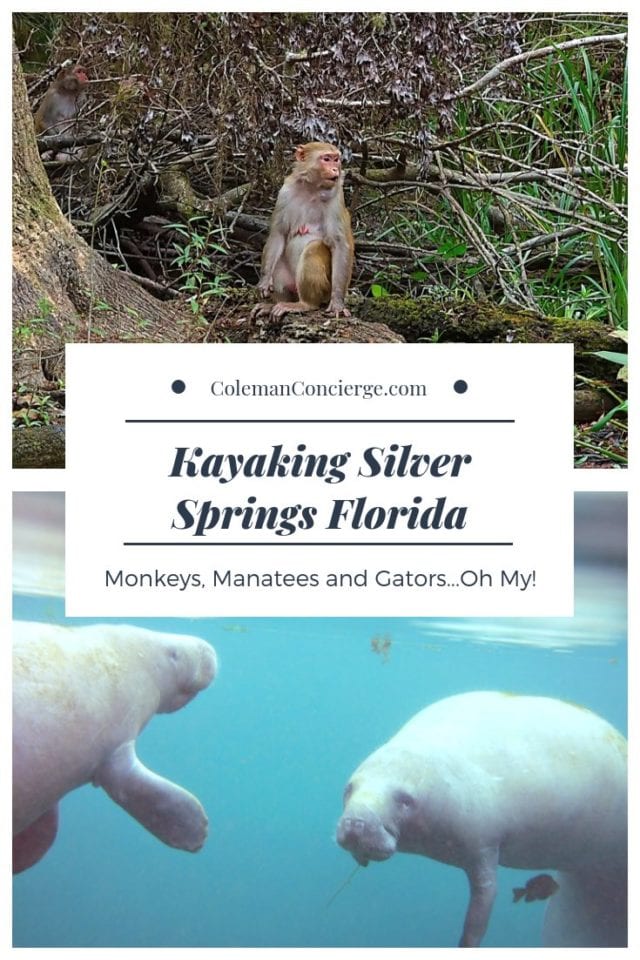 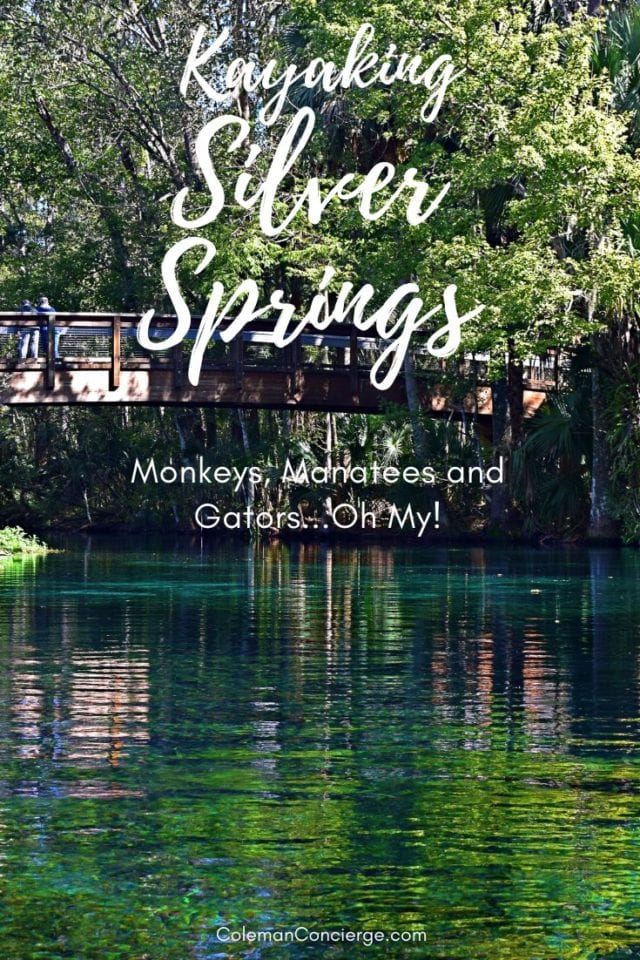 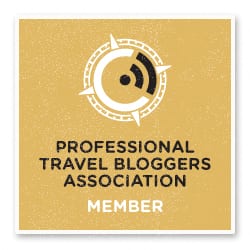