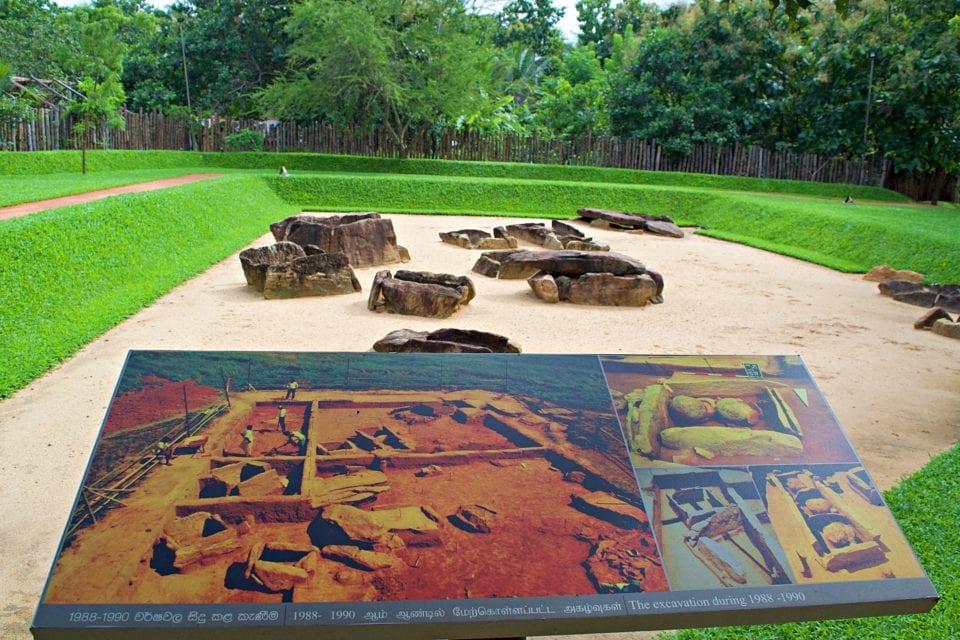 In 2017, Sri Lanka opened a recently discovered archaeological site for tourism called the Ibbankatuwa Megalithic Tombs, located near Dambulla. This site can be seen as a quick side trip from Dambulla Cave Temples, Sigiriya Rock, Polonnaruwa, or Pidurangala Rock. It is carbon dated to roughly the founding of Anuradhapura ~500 BCE which predates Polonnaruwa. What makes this visit special is that it is still an active archeological site, with many secrets left to discover. It is also a reminder of prehistoric life in Sri Lanka. 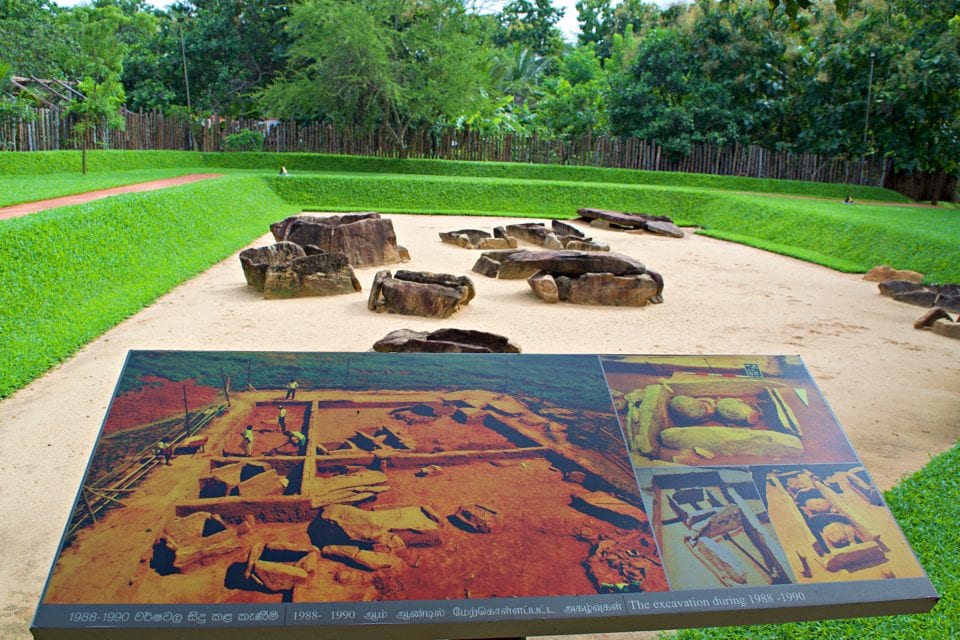 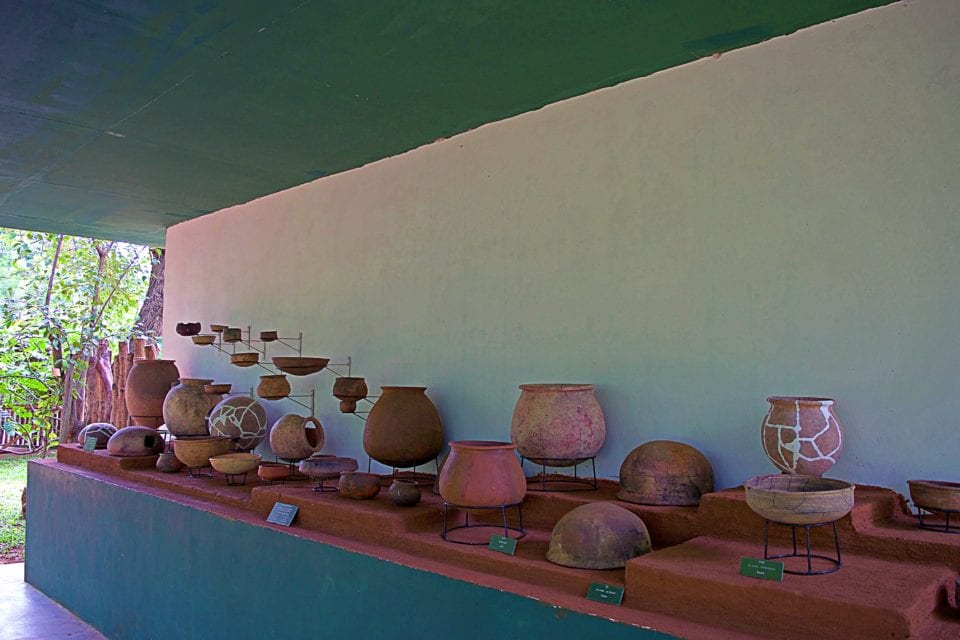 The Megalithic Tombs were first discovered in 1970 by residential excavation at the site. The archeological significance was quickly recognized and paved the way for the surrounding land to be designated an archeological protected site. The first wave of excavation began in 1983-84 and again in 1988 and 1990. The associated settlement is about 200 meters east of the site. It is roughly 15 acres in size and has been excavated on successive digs between 1988 and 1991. The site opened as a tourist attraction in 2017 and can be visited for a nominal fee. 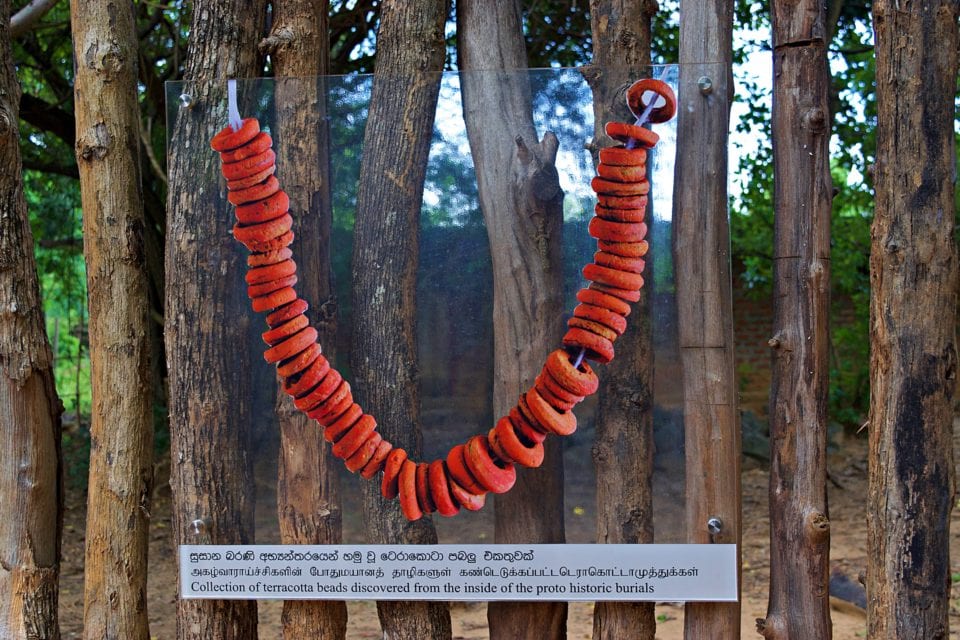 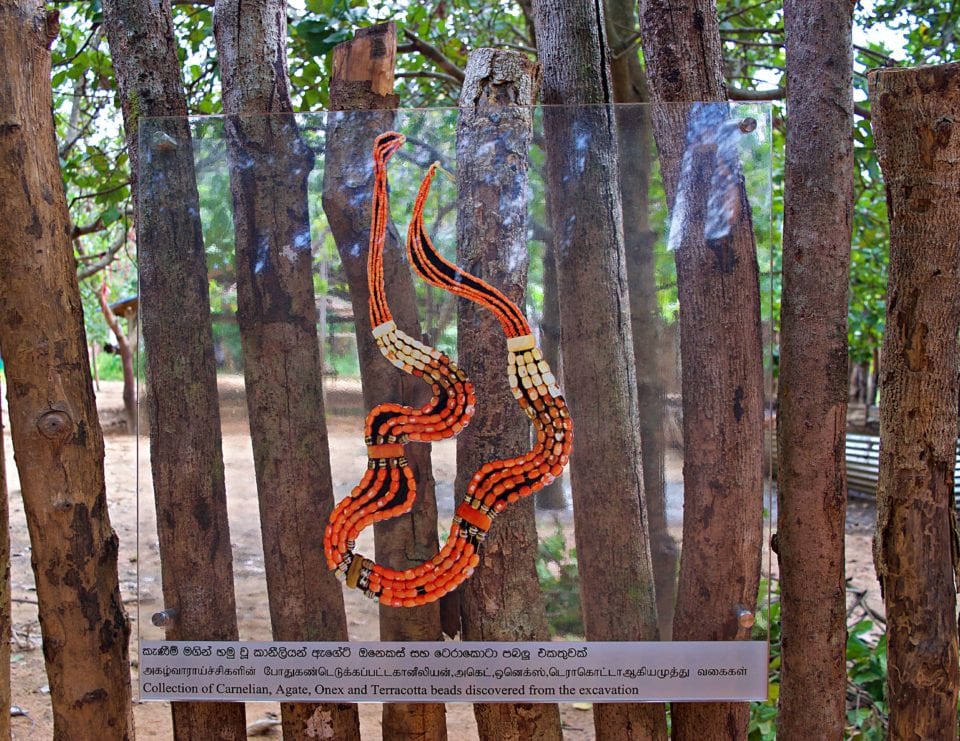 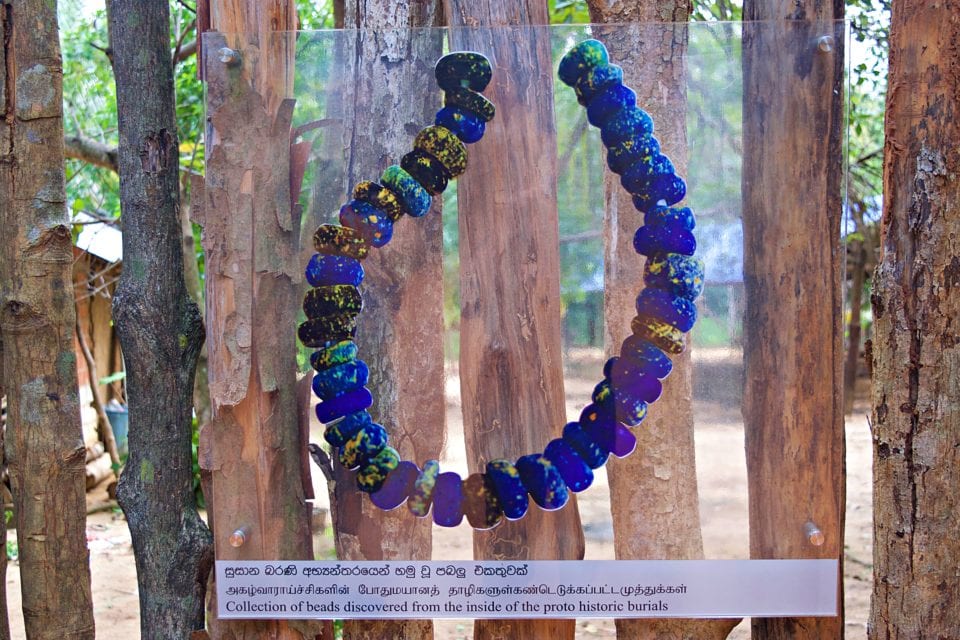 Findings at the Ibbankatuwa Megalithic Tombs

The cemetery covers about 1 sq km and consists of 42 clusters of tombs. Each cluster contains roughly ten tombs. The tombs consist of four flat rock slabs that form a box with a capstone slab on top. Some of the tombs contain skeletons, while others have cremated remains.

Grave goods and tools were also found at the site. These include a variety of clay pots, iron, copper and gold artifacts, beads, and necklaces. Interestingly, some of the gemstones uncovered are not natively found in Sri Lanka but are available in nearby India. This might indicate trade, or perhaps previous migration from India.

READ
Ten Tips to Have an Epic Thailand Bike Tour

The first homo sapiens in Sri Lanka were closely related to the Aborigines in Australia and called Homo Sapien Balangoda. Some theories say they came directly from Africa on rafts following the currents 125,000 years ago. They shared the island with another primitive man-like creature – Homo sinhaleyus Deraniyagala. This species of early man is thought to help bridge the gap between apes and the Java and Peking Men. The lineage of the modern Vedda people can be traced to the Balangoda Man.

Scientists are still debating who actually lived in Ibbankatuwa. The graves and burial preparation are more similar to ancient Egypt than India or Sri Lanka. Perhaps these are customs that the Balangoda elite preserved from the African heritage. However, the presence of Indian gems in the grave goods provides another twist. Could they have traded for these gems, or captured them from raids? The Dambulla Cave Temples were already operating by the time of the Ibbankatuwa Burials. Maybe they were an isolated band of refugees from India who were living in the jungles of Sri Lanka. 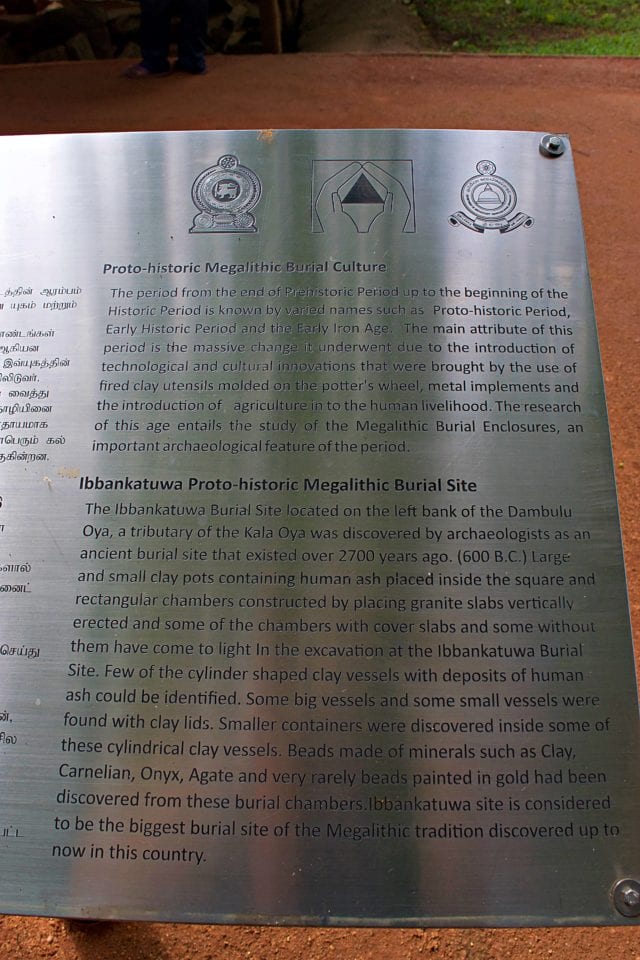 The most fascinating part about fresh archaeological sites isn’t all of the answers that they bring up, but all of the questions they ask and the stories they tell. By visiting here, I took an intellectual journey to Stone Age Sri Lanka, and learned about the place it holds in the story of man. This isn’t the story of a prosperous a powerful ancient kingdom or stunning monastery. It’s the story of survivors carrying on their ancient ways as the world changes around them.

You might not be wowed, but, if you’re an archeology fan, there is a special feeling that comes from being so close to new work.  To be honest, this attraction didn’t make it into our best of Sri Lanka guide but it’s an easy short stop if you’re in the area. The Megalithic Tombs are on the Kurunegala – Dambulla road approximately five kilometers before Dambulla town. There is adequate signage to find the tombs as you drive along the road. 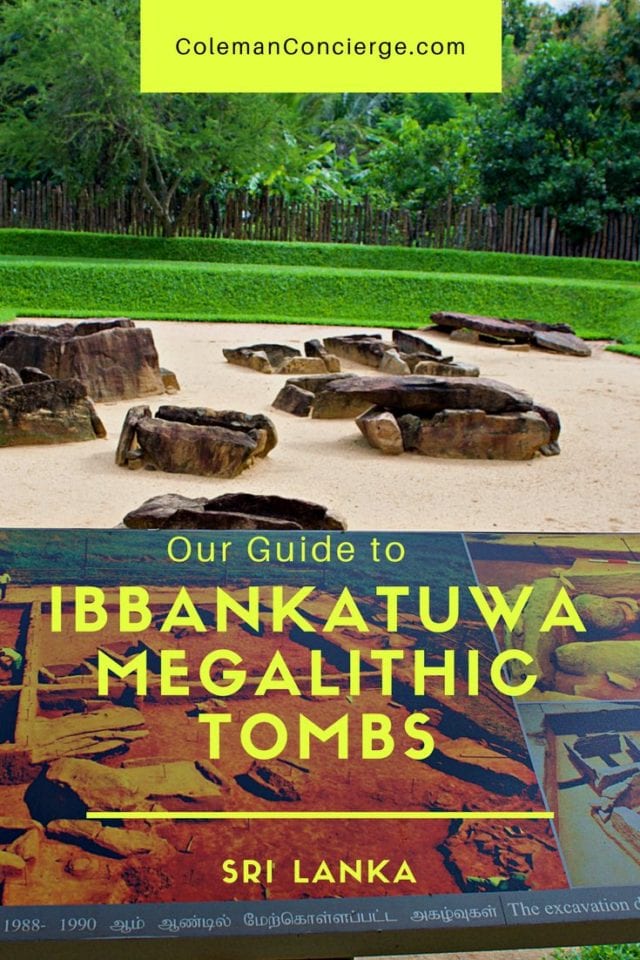 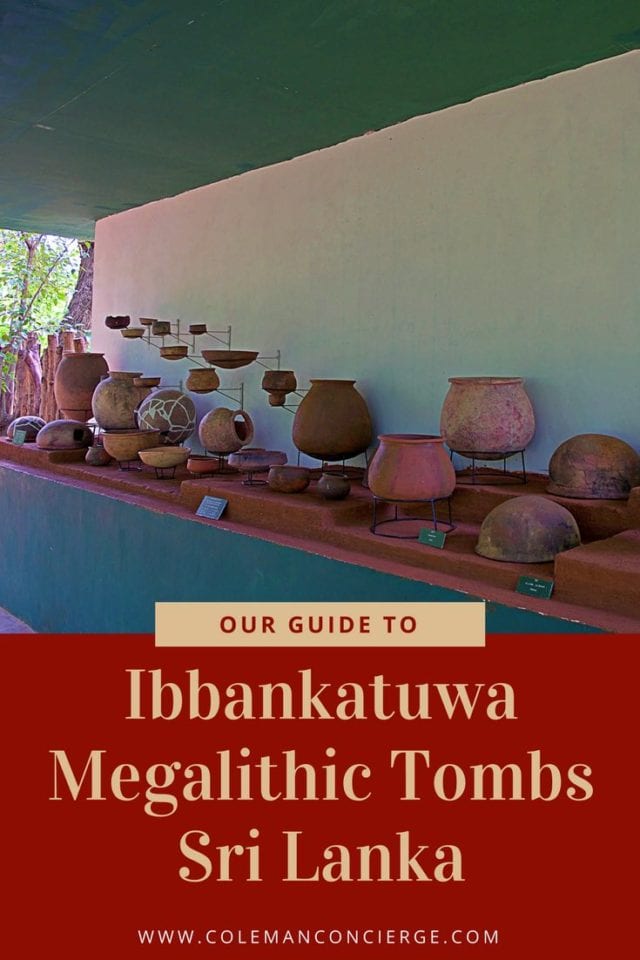 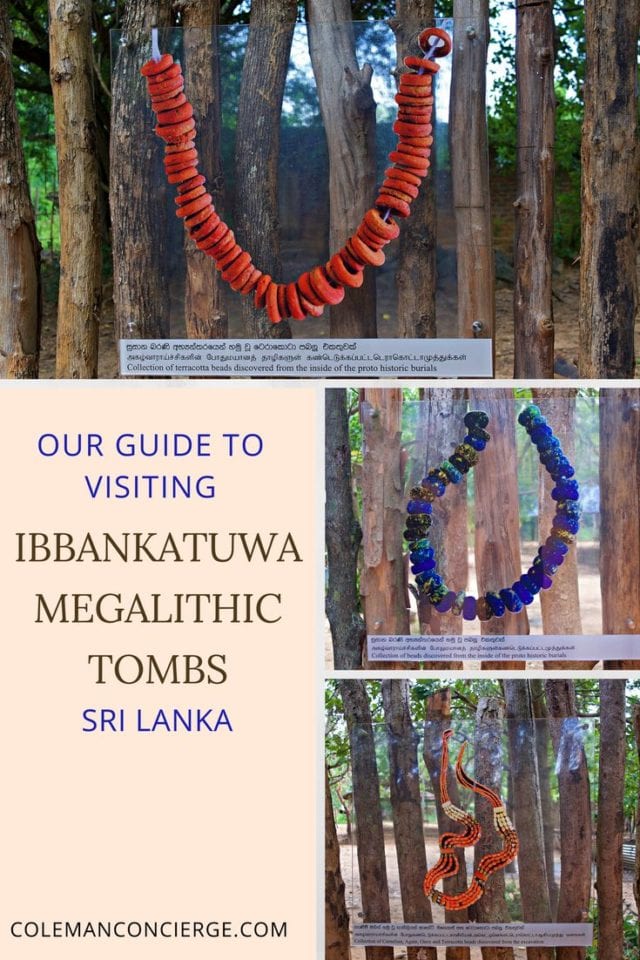 🎶Sittin' in the mornin' sun. I'll be sittin' wh

“Long walks on the beach are the supposed holy g

We keep having people asking us about taking getaw

We just found out we get to return to Coastal Miss