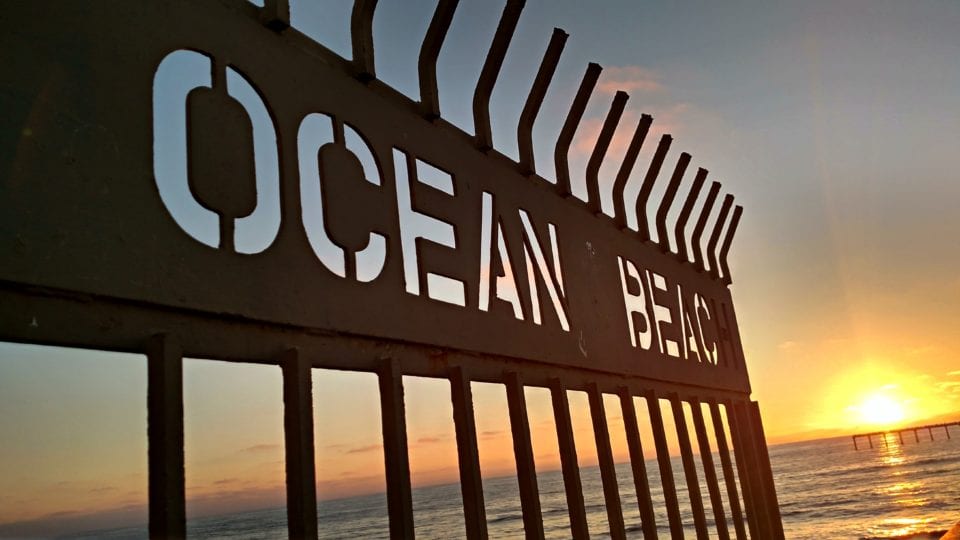 Ocean Beach California is a beach city just outside of San Diego that is home to golden sunsets and hippie culture. Think of it as the Haight-Ashbury of Southern California. If you want some good vibes and fun in the sun, then check out our guide to Ocean Beach.

We say that the beaches North to South in San Diego are similar to Los Angeles with La Jolla being akin to Malibu. Pacific Beach, with Crystal Pier and Belmont Park, are the southern mirror of Santa Monica and its namesake pier. Then, there are Venice and Ocean Beaches. Both beautiful and just a little weird. Ironically, Ocean Beach was originally named Mussel Beach when it was first established. That’s mussels, a mollusk, and not the beefcakes pumping iron in off the Venice boardwalk.

Festivals and Music of Ocean Beach

If you want to see San Diego’s Grateful Dead cover band, just come to Winston’s every Monday night to check out the Electric Waste Band. Every Wednesday, there is the Farmer’s Market on the main drag off Newport Avenue between Cable and Bacon streets. O.B. also puts on the OB Street Fair & Chili Cook-Off in the summer, Fourth of July Fireworks over the pier, and Oktoberfest in the fall (all of these usually include more chances to see the Electric Waste Band live). April 20th is usually special in OB too, but the Ocean Beach Main Street Association doesn’t promote that. This was the town that played Rocky Horror Picture Show in San Diego every Friday and Saturday at midnight until the 1980s. It’s that kind of place.

Ocean Beach starts just south of the San Diego River. Along the river runs the San Diego River bike path. 100 years ago, this was the site of the Wonderland Amusement Park, but now it’s just a local playground. The river hits the ocean at Dog Beach, where your pups can play in the sand off leash. South of Dog Beach is the Ocean Beach Pier, where you can fish without a license or watch the surfers. There is also a claim that the first surfing in San Diego was done in Ocean Beach in 1916 when a lifeguard borrowed a surfboard from Duke Kahanamoku himself.

South of the OB Pier is Sunset Cliffs, one of the most photogenic sunset spots in all of San Diego and the perfect way to end the day on a romantic getaway. Between the cliffs, surf and sun, the photo opportunities are only limited by your imagination. In the photos, you’ll see our photo tour of a fabulous sunset on a high wave/ high tide day. The daytime blue fade to an orangey red sunset, and then the purples return once the sun drops over the horizon. Long story short, red is a short wavelength and purple is a long wavelength of light. The short wavelengths of light get scattered by the clouds and haze at sunset which creates which causes the orange, and red pallet. Once the sun sets over the horizon, only the longer purple wavelengths are able to bend around the curvature of the Earth.

That day, we followed the Sunset Cliff Trail down the coast until it ended at Point Loma and the Nazarene College. We annotated our journey in the hover text of the photos if you want to follow along. We promise there is more guide coming after the sunset photography.

The foodie scene is alive and well in Ocean Beach. On the high end is BO-beau Kitchen located near Robb Field. Owned by the local Cohn’s Restaurant Group, they offer French comfort cuisine. It’s a great place for a burger or their Tuesday date night (a staple of all Cohn’s Restaurants). It’s one of our go-to places for Thanksgiving when we can’t weasel our way into a party invitation. Locals rave about the OB Noodle House (which might just have the most beers on tap in OB). You can’t forget the iconic Hodad’s for burgers and amazing french fries. Get a sticker to show your friends back home, and try if you can to sit in the VW Bus booth. It should come as no surprise that there are good vegan and vegetarian food options at Hugo’s Cocina, Ocean Beach People’s Organic Food Market, or Plant Power Fast Food. You can grab an ice cream at Lighthouse Ice Cream & Yogurt or a beer and many of the brewpubs in town. You can even catch a show at Winston’s, The Holding Company or Wonderland (there’s that name again).

What you will not find in Ocean Beach is a swath of chain restaurants and hotels. There is a distinct lack of commercialization in this city and here’s why.  In 1915, Ocean Beach was connected to San Diego by light rail and a bridge to Mission Beach. In 1951, the bridge was demolished, which logistically isolated Ocean Beach from the city. OB remained isolated until1967 when I-8 construction was completed. Ocean Beach “rejoined” San Diego in the Summer of Love but the hippie culture that grew up during its isolated period still remains today. It’s still not the easiest beach to reach or park at, but it has a charm and character that makes it unique and worth visiting.

I don't know about you, but I have a bucket list o

Here is another view of the Cahaba River approachi

This is one of our top travel moments ever! We too

Maybe this isn't something an Instagrammer should

Since moving to Alabama de decided to go on a year

"Life Is Only a Reflection of What We Allow Oursel