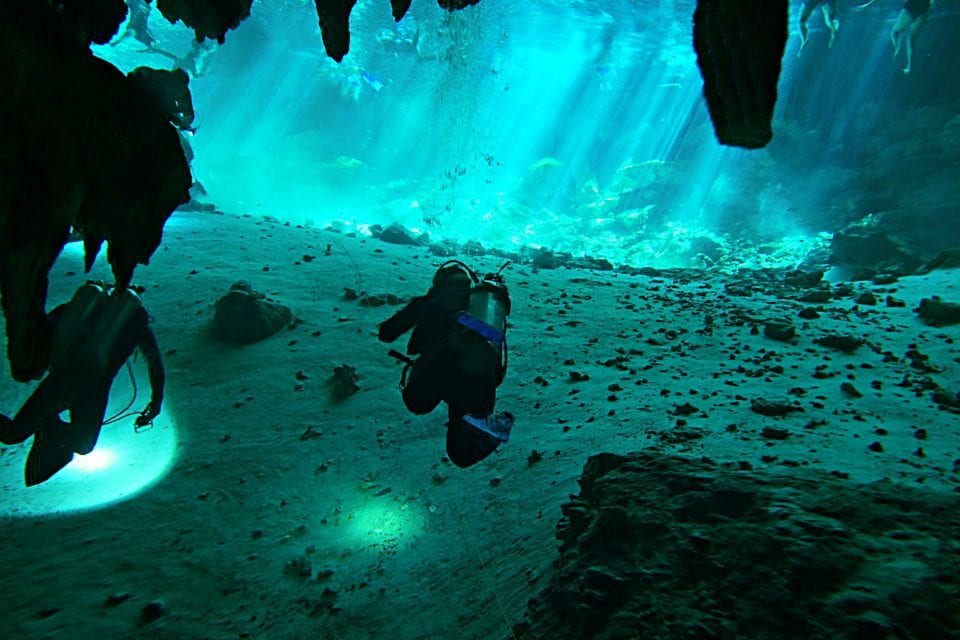 Tulum holds a special place in the hearts of divers everywhere as the cenote diving capital of the world. The world’s largest underground river called Sac Actun, Mayan for “White Cave”, flows 153 km or 95 miles through the Yucatan Peninsula. Innumerable cenotes break through to the surface of the jungle, giving explorers access to depths below. Sac Actun reaches the sea near Tulum, where a significant number of these cenotes are located.

Long before I married Jenn or blew my first bubbles from a regulator, I dreamed of cavern diving in Tulum. My mountain biking buddies took scuba vacations all over the world. I asked them which dive was their favorite. Without hesitation, they said diving cenotes in Tulum. They painted a picture of flying through a cave with beautiful formations all around you. It seemed like a dream too good to be true, but the reality was even better.

What Certification Do You Need to Dive Cenotes?

Perhaps the first question should be what is a cenote? A cenote is a water-filled sinkhole created when the roof of an underground cavern collapses. It’s a mixture of light and dark, water and cave. We partnered with La Calypso Dive Center to explore this incredible underwater world for ourselves.

All of their guides are certified cave divers, but they explained this wasn’t necessary for our trip. Scuba standards call for specialized training and equipment for divers to leave the ‘light zone,’ which is the first 130′ or so of passage where you can still see natural light. The amazing thing about Tulum cenotes is that you can dive real cave passage that has enough skylights (or cenotes) that you never leave the light zone. The cenotes they selected all had safe exit points. That means even open water divers can explore cave passages without such precaution or additional training. We were stoked to be able to safely enter such a unique natural environment.

We met Julio, our guide, at La Calypso Dive Center in downtown Tulum. It wasn’t much more than a shack in the back of a restaurant, but it was more than sufficient for our needs. Judging from their high rankings on TripAdvisor, many people felt the same way. Instead of a dive boat, we all boarded Julio’s truck and drove to Casa Cenote. Located just off the ocean a little north of town.

Casa also is called Manati Cenote, because the occasional manatee makes the 200’ swim in from the ocean for a drink of fresh water. These are the species of manatees we have in Florida, but Tulum is warm enough that they don’t need the freshwater springs to overwinter. They just pop in for a visit and then go about grazing in the ocean. Manatees who have access to fresh water can eat more plants that would otherwise be too salty.

The first oddity we noticed about swimming in Casa Cenote was the halocline where the fresh and salt water met. Passing through the halocline was a bit like diving drunk. The world went fuzzy, but all of a sudden cleared up on the other side.

Casa Cenote was almost entirely open on the top. Mangrove roots grew in from the edges, and quite a few critters called this place home. My favorite was Panchito, the local crocodile. Sorry for only the tail shot of Panchito. It was as close as I cared to get. There were also baby flounders resting in the sand and some perch hanging out in the main pool. What Casa lacked in formations, it made up for in creatures.

Casa had a simple and straight forward dive plan, which I fully appreciated for my first cenote dive. Many shops were using it for their scuba classes, so it made the perfect “checkout” dive for a longtime friend of mine who just got certified over the summer. I was so thankful to see her diving safely here without any distractions or consequence. I felt ready for our next challenge, where we would have significantly more overhead environment.

Dos Ojos is Spanish for ‘two eyes’ and named for the two separate cenotes that break into the Sac Actun river system. It was just up the road from Casa and inland about a mile. Quite a few people were snorkeling there, but unless you were penetrating the cavern, it really didn’t seem worth it to me. We dropped down beneath the feet of the snorkelers and entered cave passage filled with white crystal formations. It was happening…. I was flying through a cave.

We dove the Barbie Route through Dos Ojos, which flowed in two parallel guidelines between each of the cenotes. Julio said a few people get claustrophobic here, but I felt nothing but the exaltation of being in a beautiful place. You want to make sure your buoyancy is good and practicing frog kicking wouldn’t hurt, but this is a very accessible adventure. My less experienced diving friend did just fine.

You know that feeling when dawn breaks in the forest or the sun sets over the ocean? The world fills with light, peace, beauty, and serenity. That’s the only way I can describe floating through this natural cathedral. Time simultaneously stood still and raced forward. We slowly kicked by massive limestone formations and into sanctuaries flooded with light from the surface. I was somewhat surprised when I saw the route’s namesake toy at the far end of the line resting in the mouth of a plastic crocodile. It was the signal to turn around. A quick glance at my air gauge told me that we had plenty of air to get home. Ah, the beauty of shallow diving. After returning to the main chamber, I knew that I wanted to do the dive again.

What to Do When Not Diving in Tulum

Tulum has a reputation as a beautiful beach town filled with Instagramable spots and delicious restaurants. Most of these photo-ops are located along the beach road. The Tulum Ruins are the only Mayan ruins with an ocean view. Located about a half hour inland on the way to Chichen Itza, you’ll find the Coba Ruins where you can still climb a major pyramid. On the road to Playa Del Carmen (and shark diving!), you’ll discover Akumal Beach where you can snorkel with sea turtles. South of town is the Sian Ka’an Biosphere Reserve, the best-preserved natural environment on the Yucatan Peninsula. For more ideas, check out our massive article on unbelievable Riviera Maya excursions and their less touristy alternatives.

Personally, I think I am hooked on cenote diving, plus, Jenn had to sit this dive out because of her sinuses. We’ll have to return to dive sometime soon to experience more of Tulum’s cenotes, like the deep dive ‘Car Wash,’ or Angelita where you break through the halocline into a magical cavern below. Tulum cenote diving is a ‘must include’ if you’re on a Cozumel dive trip too!

Would you ever dive in a cenote?

Disclosure: A big thank you to La Calypso Dive Center for hosting us and setting up this fantastic tour! For more travel inspiration check out their Instagram and Facebook accounts.